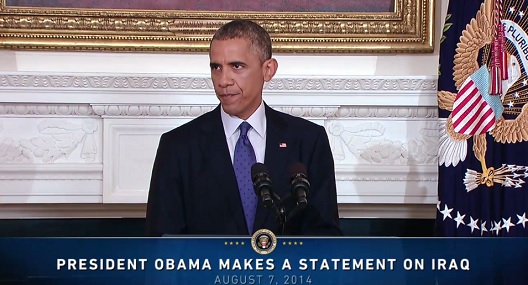 On August 7, President Barack Obama authorized both airstrikes and humanitarian relief in response to attacks launched by the ersatz caliphate of the criminal enterprise calling itself the Islamic State (IS). The proximate cause of US military intervention is a looming humanitarian catastrophe centering on a vulnerable Iraqi minority (the Yazidis) seeking safety from IS on the slopes of a mountain. But legal cover for the action was provided by the president’s assertion that IS forces “have neared the city of Erbil [the capital of the Kurdish Regional Government], where American diplomats and civilians serve at our consulate and American military personnel advise Iraqi forces.” This decision to intervene in the face of IS terror and mass murder is appropriate and welcome. Inevitably, however, those who have called for a similar humanitarian intervention in Syria—where the depredations of the Assad regime and IS alike dwarf what is happening in Iraq—will wonder why Iraq and why not Syria.

The answer lies in President Obama’s deep skepticism about the efficacy of applying US military power to seemingly intractable Middle Eastern disputes: the kinds of disputes he strongly believes he was elected to terminate and avoid. On more than one occasion the president has, in the context of Syria, articulated his belief that any form of US military intervention there would inevitably place the United States on a slippery slope toward invasion and occupation—a repetition of the disastrous experience in Iraq inaugurated by the 2003 invasion. Perhaps, in the mind of the president, the slippery slope argument does not apply to Iraq itself. More likely, he concluded that circumstances in Iraq—terrified Yazidis clinging to the slopes of a mountain and Kurds calling out for help in the face of the IS onslaught—left him no choice.

The worst of the president’s critics will, in the wake of the Iraq intervention decision, make two arguments. Domestic critics will play back Mr. Obama’s slippery slope argument, claiming falsely but insistently that anything at all done militarily by the United States will lead inexorably to boots on the ground, owning that which one has broken, and so on: as if the original sin—the 2003 invasion and occupation of Iraq—was the result of an accidental slide down a slope instead of a deliberate decision to go to war, albeit without a stabilization plan for the country being occupied. Some Arab critics will say that slaughter in Syria—centering as it does on torture, terror, murder, and maiming directed mainly at Sunni Muslim civilians by a remorselessly criminal regime means little or nothing to President Obama: but threats to Yazidis, Kurds, and Iraqi Christians get the president’s attention. This line of criticism is as bankrupt and fallacious as the slippery slope line.

In anticipation of what critics would say, Mr. Obama said the following:

So let me be clear about why we must act, and act now. When we face a situation like we do on that mountain, with innocent people facing the prospect of violence on a horrific scale, when we have a mandate to help—in this case, a request from the Iraqi government—and when we have the unique capabilities to help avert a massacre, then I believe the United States of America cannot turn a blind eye. We can act, carefully and responsibly, to prevent a potential act of genocide. That’s what we’re doing on that mountain.

Note well the criteria put forward by the president justifying this action: innocent people; violence on a horrific scale, unique capabilities to help avert a massacre and prevent potential genocide, and “a request from the Iraqi government.” One may agree or not with the president’s decision to intervene militarily in one place but not another. Yet neither the mythical slippery slope nor some kind of ethnic-sectarian preference plays a role in the decision that has been taken.

The view here is that the Obama administration erred in failing to neutralize Assad regime air, artillery, rocket, and missile assets in the wake of the horrific chemical atrocity of August 21, 2013. This error was compounded by the failure to secure humanitarian understandings and guarantees in conjunction with the subsequent agreement governing the removal of Syria’s chemical weapons. The result was twofold: the Assad regime redoubling its assaults on defenseless civilians through mainly non-chemical means; and Iran and Russia going all out to help the regime win militarily in western Syria, thereby shredding US hopes for a peaceful, negotiated political transition. Now, as a result of a de facto partnership between the regime and IS, armed Syrian nationalists fighting both sets of criminals are in danger of extinction.

The administration—again, reflecting the president’s skepticism that anything useful can be done militarily to mitigate slaughter or promote transition in Syria—has been quick to deny that the Assad regime’s impressive portfolio of war crimes and crimes against humanity adds up to genocide. It is as if genocide—even if it involves 10,000 people—provides more of a humanitarian intervention mandate than mere mass homicide, even if it involves multiples of 10,000. One suspects the administration has used the “it’s not genocide” argument more to evade the “Never Again” dictum than to downplay the extent of the Assad regime’s depredations.

More attention should be paid, perhaps, to the “unique capabilities” and “mandate” arguments, particularly the latter. Surely, the United States had, in the context of the summer of 2013, unique military capabilities, which could have limited significantly the ability of the Assad regime to conduct mass slaughter. Every barrel bomb dropped today by regime helicopters on mosques, schools, bakeries, and hospitals is in part a consequence of those unique capabilities not being exercised.

For this administration, however, legal mandate is important. Whether its importance reflects a disciplined adherence to constitutional and international law or a tactic employed to justify some actions while avoiding others is, perhaps, debatable. What is clear, however, is that a “mandate” emanating from a government headed by a person—Nouri al-Maliki—whose gross incompetence and sectarianism have brought Iraq back to ruin seems to facilitate doing something. On the other hand, the abysmal combination of Russian and Chinese vetoes in the United Nations Security Council and the continued recognition by Washington of Bashar al-Assad as the President of the Syrian Arab Republic seem to provide the requisite excuse for doing next to nothing.

Does the United States wish to have a proper legal mandate to justify the protection of human life from mass murderers—the regime and IS—in Syria? It will receive nothing in the way of assistance from Moscow and Beijing. Permission to protect vulnerable civilians will not be forthcoming from Bashar al-Assad. If a mandate is desired it could come from a nationalist Syrian government established on Syrian soil and recognized by the United States. But if a legal mandate to act in Syria is the last thing the Obama administration wants, it will continue to uphold the legitimacy of Bashar al-Assad’s presidency.

Military intervention in Iraq is justified on its own terms. If one has the unique ability to prevent or mitigate mass murder while minimizing the risk to those actually doing the intervention, one should act. In Syria, that which was a threat three years ago has become an unspeakable abomination. If it is a legal mandate one needs to act, getting one is far from impossible. In the first instance, however, what is required is a desire by President Obama to act.

Image: In a statement addressing the current crisis in Iraq, President Obama announced that he authorized two operations in the country -- "targeted airstrikes to protect our American personnel, and a humanitarian effort to help save thousands of Iraqi civilians who are trapped on a mountain without food and water and facing almost certain death." (Photo: White House/Press conference screenshot)