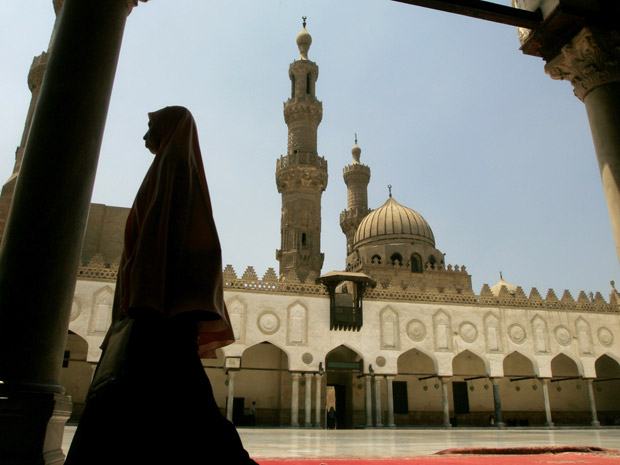 “Al-Islam huwwa al-hall” (“Islam is the solution”) has been the refrain and political slogan of the Muslim Brotherhood for decades – long before members of the formerly banned organization  could openly run for political office.   Forced underground by the repressive policies of Hosni Mubarak’s former regime – including torture and arbitrary detention – the Brotherhood successfully built a broad-based grassroots following beyond the formal political arena by looking to religion for solutions to all individual, social, economic and political ills.  All Egyptians knew what the problems were under Mubarak:  poverty and economic despair, poor health care and education, corruption at all levels of the economic, political, security and “justice” systems.

Whether or not Egyptians actually accepted that “Islam was the solution” could never be tested during Mubarak’s 30-legacy of fraudulent elections – but now it can.  After three rounds of Parliamentary elections (that saw their share of irregularities, but nothing compared to the pervasive ballot-rigging practiced by the former ruling National Democratic Party (NDP)), the Brotherhood is dominating Egyptian politics as never before in their 84-year history.   Their official political arm, the Freedom and Justice Party (FJP), control 45 percent of seats in the People’s Assembly.  A skeptical but expectant electorate have endowed the FJP with a sweeping political mandate to deliver on their campaign promises of social justice and economic opportunity for all Egyptians.

While the FJP has emerged as the “mainstream” party in Egypt’s newly diversified political arena – even critiqued by some as the “the new NDP” – on the extreme end of the Islamist spectrum, the formerly apolitical Salafi movement is using its newfound parliamentary leverage (20 percent of the People’s Assembly seats) to promote a hardline conservative interpretation of Islam.  .  The statements and actions of many Salafis – including proposals for banning alcohol and beach tourism — have Egyptians concerned that the Salafis have illiberal and undemocratic intentions. Many fear that elected Salafi law-makers will seek to implement a narrow interpretation of Islamic law in Egypt and exclude women from public and political life.  Many Egyptians see their Salafis as an extension of Saudi Arabia’s conservative Wahhabi establishment; yet the impressive electoral victory of these Salafis demonstrates that their religious-based platform resonates with a significant number of Egyptians.

While the newly elected parliament is clearly dominated by Islamist voices, it’s important to recall that not all Islamists are the same and not all Muslims are Islamists.  What Egyptians can expect in the months and years ahead is a battle for “hearts and minds” being waged by a variety of religious-oriented factions, political parties, and non-political actors as well.

The leading force in the latter category is “establishment Islam,” in the form of Al-Azhar, the venerable institution with a thousand years of history in Egyptian society (and politics, to the chagrin of many in Al-Azhar).

Al-Azhar’s official voice is that of the Grand Imam, Shaykh Ahmed al-Tayyib.  He has been especially vocal in recent months in the emerging tug-of-war over “who speaks for Islam” in Egypt.  The Grand Imam brokered an agreement in June 2011 called Wathiiqat al-Azhar, the “Azhar Document”; it was developed expressly to be a blueprint for resolving constitutional debates and controversies expected in the months ahead.  Shaykh al-Tayyib brokered this agreement in large part because he feared that that rising political and religious polarization – fueled by persistent demonstrations and sectarian incidents – would obstruct the realization of the revolution’s goals.

The calls for revolution and reform of Egyptian politics also have found an echo inside al-Azhar.  Shaykh al-Tayyib has reinstituted the age-old “Council of Senior Clerics,” a consultative body that used to define and guide the independent institution for centuries, until Gamal Abdel-Nasser’s coup and the military dictatorship pressed al-Azhar into the service of the Egyptian state. Under Mubarak’s regime, al-Azhar was used as a political implement to legitimize the ruling party’s policies and steadily lost its autonomy.  By renewing the Council of Senior Clerics, al-Azhar will once again have the authority to choose its own Grand Sheikh, a formerly political appointment that had been the prerogative of Egyptian presidents since Nasser.

Another leading figure redefining al-Azhar’s role in the political system, is the Grand Mufti of Egypt, Dr. Ali Gomaa.   Dr. Ali was appointed Grand Mufti in 2003 and since that time has “revolutionized the process of issuing fatwas in Egypt transforming Dar al-Ifta from an institution that was perceived as the exclusive mouthpiece of the Mufti himself into a modern institution with a consultative fatwa council and a system of checks and balances.” And since the overthrow of Mubarak and the rise of Islamists on the political scene, the Grand Mufti has drawn lines of theological battle, and has made it clear that the MB and its FJP, and especially the extremist Salafists, are not representative of all Muslims.

The Grand Mufti, who has had a long history of conflict with the Brotherhood, now continues to suggest that the Brotherhood is not interested in “cultivating a genuine Egyptian Democracy.  Their shallow and heavily politicized understanding of the faith … [and their] seizing of religious discourse in the wake of the revolution, to the exclusion of other currents and trends, is simply another example of their political opportunism,” according to an official statement obtained al-Azhar.

In taking a decisive stand against the Brotherhood as well as the extremist Salafists, who then can and should speak for Islam and Muslims and Egyptians?  The answer to Dr. Ali Gomaa is obvious:  “the institutions that make up the paradigm of al-Azhar, whose inclusive and accommodating approach contrasts drastically from the Islamism that has been such a polarizing and exclusivist force for many decades.”

As Ibrahim Negm, Senior Advisor to the Grand Mufti of Egypt, told me:

"The appropriate reaction to the significant gains of the Islamist parties [FJP and Salafists alike] is not to grow pessimistic but rather to be aware of it and to remain steadfast and constant in speaking out for moderation and engage with them seriously about the many challenges our country is inevitably facing."

So for those of us on the outside looking in at Egypt and the results of its first relatively free and fair democratic elections, which delivered 70 percent of parliamentary seats to Islamists, it is tempting to assume that theMuslim Brothers and their extreme cousins the Salafis are the primary religious-based elements shaping Egypt’s emerging post-Mubarak political landscape.

But let’s not forget the 1,000-year old institution that claims to speak for all Egyptian Sunni Muslims (and even claims to speak for all Sunni Muslims throughout the world): Al-Azhar, its University, its ulama and muftis, and especially those who teach and preach an apolitical (even anti-political) message of Islam – focusing on faith, jurisprudence, and personal integrity, and claiming the mantle of moderation, tolerance, and inclusion of all peoples, Muslim and non-Muslim alike.

Al-Azhar and its leaders are in dire need of internal reform and renewal to keep pace with the broader democratic transition taking place in Egypt.  Al-Azhar is respected as an institution, but it is tainted by its history of propping up the regimes of Nasser, Sadat, and Mubarak for the past 60 years.  Sources within al-Azhar reveal that the Grand Mufti Dr. Ali Gomaa and his colleagues in “the Azhar paradigm” (as he calls it) are heaven-bent on reformation, renewal, and re-introducing themselves to all Egyptians as the only pure and true source of Islamic thought, Islamic law, Islamic jurisprudence.  If al-Azhar can make good on its promise to serve as a neutral broker for an inclusive dialogue over Egypt’s future, then the institution may very well succeed in rebranding itself as a voice for democracy rather than authoritarianism.

Denis Sullivan is a Professor of Political Science and serves as Director of Northeastern’s Middle East Center for Peace, Culture, and Development. He has worked, studied and lived in Egypt over many decades. He can be reached at [email protected]