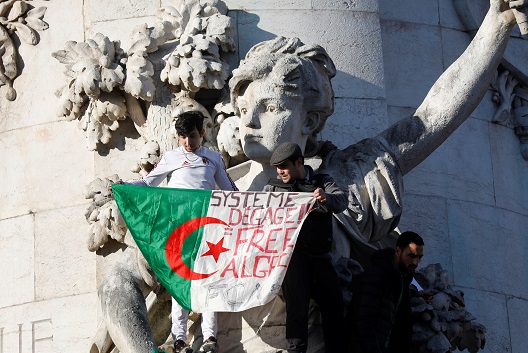 Read in Arabic here. Algerian elites are missing a Leopardian moment. Giuseppe Tomasi Di Lampedusa’s masterpiece, the Leopard—which has become a staple of political science—, expresses the intrinsic idea that elites must change in order to remain elites. In the book, the old baron reprimanded his nephew because he joined forces that landed under the revolutionary general Garibaldi to overthrow exactly the system that constituted the elite to which they belonged. The answer of the nephew was “if we want that everything remains as is, it is necessary that everything changes.” He had to join the revolutionary forces in a commanding position in order to effect change in the system, but preserve their family’s power in the new elite system.

The Algerian elite—also known as “the pouvoir” among Algerians—is in the same situation as the old baron. Its decades-old pledges of allegiance to the Front de Libération Nationale (FLN), to the war of independence and, in a different way, the adhesion to the values of the struggle against the Islamists in the civil war of the 1990s ring hollow in the ears of the vast majority of the youth who now compose 60% of the Algerian population. It has become clear not only through the demonstrations of 2011, diffused by the pouvoir with the promise of meaningful constitutional and governance reforms, but also—perhaps more forcibly—by the demonstrations of the last few days throughout the country that this group of demonstrators does not trust the regime’s stale arguments.

The largest country in Africa by geographic size and the largest military spender on the continent as well, Algeria no doubt plays an essential role for stabilization of the area and Mediterranean. However, its tensions that exist within the country—between the elite and the masses and also within the elite itself—constitute a recipe for disaster, at least in the long term. Algeria’s assets and largess make it a giant in the region; the regime, however, has become the giant’s clay feet.

Algeria has been experiencing many of these protests in the last years, but the regime has dismissed or disguised them as parochial in nature: coming from specific professions, such as teachers and doctors, demanding improved salaries and benefits. An analysis of the components of the most recent demonstrations and quality of their demands clearly shows that, contrary to the last few years, the people that are going to the streets have very specific political demands, including the noncandidacy of President Abdelaziz Bouteflika for a fifth term and implicitly a change of the system. To counter the latest demonstrations, the regime has, like in other Arab countries in past mass uprisings, shut down the internet in many parts of the country. Further demonstrations are planned for Friday, March 1st and Sunday, March 3rd. To dismiss the protests as meaningless and addressing them only as the request by a small part of the population for economic reforms is a big mistake.

There is clear internal turmoil among the oligarchical government. Particularly distressing is what has been going on within the elite in power. In 2018, there were an unprecedented number of arrests and dismissals of top generals and others within the military and security forces. Few were, at a later point, freed to curry favor with the military before April’s presidential elections. Dismissing figures in the military is not unprecedented in Algeria, but the increased rate of firing top officials in such numbers shows a shift toward a higher concentration of power in the hands of the very top figure: the president and his personal circle. All these movements immediately before the elections and in such an open way brings to light what the elite always tried to hide: the existence of a deep fracture within the ruling class. The question that is being posed in western capitals could at this point be considered a platitude: Is Algeria on the brink of collapse?

Predictions are obviously difficult especially when dealing with a complex reality like that of today’s Algeria. But the close-knit structure of the pouvoir and its incapacity to reform itself induces much pessimism. The fact that the elites could not agree on a personality that could succeed ailing president Bouteflika, is particularly troubling. If the elites spend more time and energy fighting each other and not paying attention to the malcontent and the rising tensions within the population at large, they may be heading for a major surprise.

The dismissal of the idea that there could be a mass revolt of the regime by quoting as the reason the tiredness of the population—unwilling to revolt after the massacres and bloodshed of the civil war of the 1990s—is no longer valid. In fact, a large part of the youth population were born in that decade and are too young to remember anything about it. On the contrary, they are perfectly aware of the present situation and most of them do not like it.

In addition to increased tensions and the population’s impatience with Bouteflika’s cemented position, the government’s main work around to addressing major grievances was impaired. The collapse in oil prices in 2014 reduced Algeria’s foreign reserves by almost fifty percent by 2018—returning to 2006 levels—despite higher oil earnings. In reaction to the financial difficulties, Algeria cut spending by temporarily banning imports, freezing public hiring and development projects, and taking measures to encourage less spending on energy. However, the Algerian elite have always been and continue to be averse to opening the oil sector to more international investment, even in the post-2014 financial reality; the country has not made large efforts to be less energy-profit dependent. Both factors have thinned the government’s cash leverage, which it heavily relies on to continue to operate in its authoritative ways. Localized micro-protests and strikes frequented 2018, particularly outside the capital, and pressure on the regime is building.

The coming April elections or the return of Bouteflika from Switzerland, where he is receiving routine medical care, are all final nails in the coffin of Algeria’s government. The claim by the group closer to Bouteflika, and dominated by his brother Said, that once Bouteflika is reelected through this new legitimization the elite will seriously undertake economic and political reforms, does not strike a positive reaction among the people. Not only because this is a promise that has been repeated at every turn over of the system (in 2011, 2013, 2015, and 2017), but the February demonstrations in Algeria show clearly that at least part of the population is not buying this argument. They request not propping up Bouteflika’s candidacy, but instead finding someone that could actually implement the much-needed reforms. If the demonstrations continue, there is no doubt that the reaction of the elites could be violent. And in that case, the reaction of the demonstrators remains to be seen.

It is delusional even to hope that the elites have any intention to change the system radically towards a more pluralistic and inclusive regime in such a short time. To answer the question posed above, it is simplistic to say that Algeria is headed in the direction of its Arab counterparts: toward chaos, insurgency, legitimacy issues, and violent expressions of resistance or that it is another country of the Arab Winter. But it is also impossible to ignore the ever-clearer signs that Algeria’s elite are tightening the noose.

Karim Mezran is a resident senior fellow at the Rafik Hariri Center for the Middle East. Follow him on Twitter @mezrank.

Erin A. Neale is a program assistant at the Rafik Hariri Center. Follow her on Twitter @erinaneale.

Image: Photo: Demonstrators wave an Algerian flag at the Monument to the Republic during a protest against President Abdelaziz Bouteflika seeking a fifth term in a presidential election set for April 18, in Paris, France, February 24, 2019. REUTERS/Charles Platiau