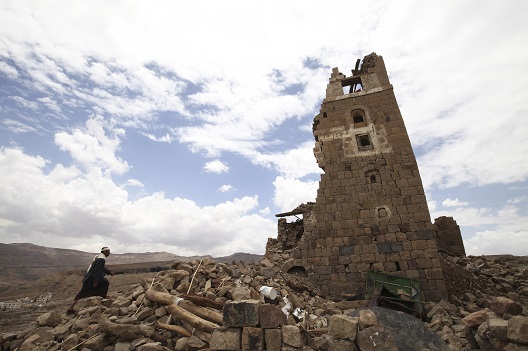 The Saudi Arabia-led coalition announced the end of Operation Decisive Storm on April 21 and rebranded the continued military intervention in Yemen “Restoring Hope.” Though the Saudis claimed to have completed their objectives, the ongoing bombing campaign and musings over a ground operation suggest this is patently not the case. The Houthis and their key ally, former President Ali Abdullah Saleh, remain active and mobile in most of the country. President Abdrabbo Mansour Hadi, whose legitimacy was a primary casus belli, remains in Riyadh where he has stayed for the majority of the war. With no new political solution yet on the table and despite the failure of the Saudi-led coalition to affect any of its original objectives, the bombing campaign has nonetheless changed the dynamics on the ground Yemen.

The most salient consequence of the bombing campaign is the catastrophic human cost to ordinary Yemenis. In an effort to prevent Iranian support for the Houthi rebels, the Saudi led coalition has imposed a naval blockade around the country disrupting the delivery of desperately humanitarian aid. Yemen relies heavily on international aid in the form of food, fuel, and medical supplies—and the country was not faring well even before the campaign. At the end of 2014, UN Office for the Coordination of Humanitarian Affairs (OCHA) estimated that 61 percent of the population required assistance of some kind. In the month of April alone the number of food insecure Yemenis jumped 12 percent. Meanwhile, the disruption of oil production in tandem with the blockade has caused an acute rise in fuel prices. In some places, gasoline is reportedly $100 for 20 liters (or $19 a gallon). Fuel scarcity has made it difficult to continue running well pumps, limiting access to fresh water, and is hindering operation of Yemen’s hospitals. Indeed, the outlook is so bleak in parts of Yemen that UNHCR expects up to as many as 100,000 Yemenis will flee the country for Somaliland in the next six months, despite the hardships that await them there.

The security climate in Yemen has similarly been devastating and things are likely to get worse before they get better, even with the recent Saudi proposal for a five-day ceasefire. The Saudi-led operation has completely ignored Al-Qaeda in the Arabian Peninsula (AQAP), which has made large strides in Hadramawt province, despite a handful of US drone strikes in recent weeks. AQAP has conquered the provincial capital of Mukalla and forged alliances with some local tribesmen. With the approximate $42 million pilfered from the central bank, arms and equipment raided from local military facilities, and new fighters liberated from prisons, AQAP has entrenched itself so deeply that some have compared its conquest of Mukalla to the Islamic State in Iraq and Syria’s (ISIS) conquest of Mosul.

However, there is a key difference in that comparison: once Mosul was taken, Iraq retained a coherent—though dysfunctional—state. Yemen’s military is completely set against itself, divided between Saleh and Hadi loyalists. A political agreement between these two forces may be nearing, but even if the army reunited, it would remain ineffective with its military bases in tatters due to coalition bombing. While the Yemeni military was somewhat successful in the summer 2014 campaign that uprooted AQAP fighters from strongholds in Abyan and Shabwa, it will be unable to stage such an effort independently in the near future. Similar to Iraq, Yemen’s defense will rely heavily on irregular forces—tribesmen and popular committees—in the short term. As if the Saudi intervention, the Houthis, a deposed president, an exiled president, al-Qaeda, southern separatists, armed tribesmen and militias were not complicating the security sector enough, ISIS has also entered the fray with its trademark combination of carnage and cinema.

Beyond the bleak whirlwind of humanitarian and security challenges, the Saudi campaign has had significant political effects, though none of them intended. Hadi has more support today than he has had in some time, but that is only because he is the uninspiring pillar around which anti-Houthi and anti-Saleh forces begrudgingly coalesce. His newly appointed Vice-President Khaled Bahah has emerged as a likely successor in the event that political negotiations lead to Hadi’s resignation. Yemen’s Foreign Minister Riyadh Yassin is lobbying for an “Arab Marshall plan,” which he claims has already begun with a $274 million donation. However, the plan would unlikely facilitate a political solution with the Houthis, as the donation has come from Saudi Arabia and Houthis have little reason to believe that they would not face continued marginalization under a Saudi-led venture. Even given the generous and commendable Saudi commitment, Yemen’s humanitarian concerns cannot be wholly addressed without easing the blockade that stifles what remains of local markets.

The good news is that few Yemenis appear willing to take sides in the Houthi-Saudi conflict and instead have the wisdom to see all parties as deeply flawed. But the fissures wrought by this war are becoming difficult to avoid and they will become exacerbated by the humanitarian challenges. Some communities are growing more hostile toward Hadi and his allies that believe they can bomb Yemen into a political solution; others focus their antipathy toward Saleh and the Houthis, castigating them as thugs that will not rest until they subjugate all of Yemen. Both are overly simplistic characterizations. The political solution remains embedded in the National Dialogue Conference’s laudable outcomes that were never implemented; federalism remains the antidote to Yemen’s ongoing process of balkanization. The historic marginalization of Houthis must be reversed. Amending the original federal map to favor a region for the Houthis to exercise greater autonomy in the north could be precisely the carrot that returns them to political negotiations. Saudi Arabia will not likely accept a greater role for the Houthis in Yemeni politics, however, without considerable pressure and assurance from its allies. It remains to be seen if Hadi and his government-in-exile has the strength—or will—to defy their hosts.

Image: A man walks to a house that was damaged during an airstrike carried out by the Saudi-led coalition in Faj Attan village, Sanaa, Yemen May 7, 2015. (Reuters)