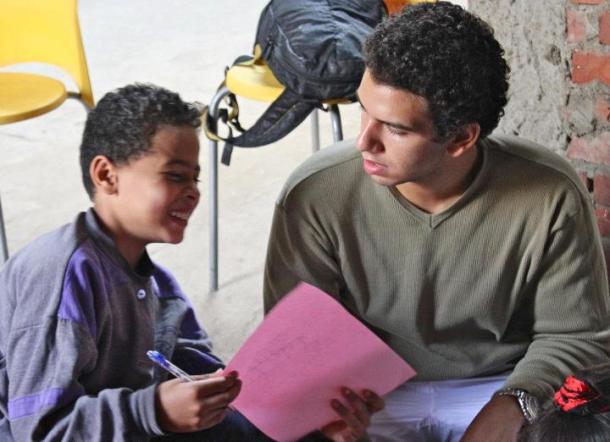 At twenty-two, Amr El Salanekly has won the 2012 Clinton Global Initiative fellowship, co-founded a social incubator and an educational platform for underprivileged kids, turned down a job with Bangladeshi Nobel Laureate Mohammad Yunus’ Grameen Bank, and raised hundreds of thousands of Egyptian pounds for community projects in Egypt, while completing his bachelor’s degree at the German University in Cairo.

The word ‘overachiever’ comes to mind.

At such a young age, El Salanekly is fiercely ambitious and clever, yet instead of breaking into the cut-throat world of corporate investment and private equity, he’s using his BA in business information and job experience in corporate development and finance to give back to his community.

He’s in it for the long run; his ultimate goal is to raise a philanthropic fund for sustainable social micro-projects such as buying and farming land, building arts and crafts centers, financing the education of underprivileged children, and more.

"I want to work with people on the ground," he says, "I want to help them further than just giving a Ramadan bag of food."

El Salanekly talks at the speed of light. Articulate and well-read on motivational and leadership literature, he bursts with infectious, youthful enthusiasm. Aside from being invited to speak at TEDx Tanta last year, he was also the youngest speaker at the Arab League Summit for advocating children’s rights to education during emergency situations. He has been featured on ArabNet’s 2011 list of Arab Pioneers and was profiled by the Brookings Institute as one of the Middle East’s youngest social entrepreneurs in 2010.

Impressive CV aside, it’s his work with ‘Educate Me’, the educational platform he co-founded that is the most commendable.In 2010, he formed Taleeda, an incubator for community projects with his three friends, Yasmine Helal, Mohamed Fawzy and Mohamed Raif, which eventually led to his joining Educate Me.

Helal started Educate Me in 2010, and when El Salanekly joined, he took over the project’s marketing and financing, though his favorite aspect was the hands-on work with the children. Educate Me targets underprivileged kids living in Rashah, a Cairo slum, and has helped finance their education, providing all educational material including uniforms and books. Staying true to El Salanekly’s desire to do more than just give handouts, Educate Me expands the children’s education by holding motivational workshops and teaching arts and crafts, leadership skills and creative thinking. He describes Educate Me as "offering an open space for innovation and self-expression."

"If the kids want to learn how to swim, we teach them commitment to learning," he says. "We helped them work out how much they needed to raise to finance their swimming classes. Then they made arts and crafts, which they exhibited and sold at a gallery. So they bankrolled their swimming classes through their arts and crafts; they learned accounting as well as swimming."

This year, he aims to raise 500,000EGP (over $82,000) to build an enlightenment center for the children that would enable the Educate Me mentors to meet with them on a daily basis instead of once a week.

Having raised 150,000EGP (almost $25,000) in just three months, relying on personal connections, El Salanekly is dissatisfied with the amount, which also includes in-kind donations and the donation of telecomm infrastructure from corporate sponsors.

"I’m not expected to raise a social venture fund at twenty-two," he says. "And when I ask for donations, sponsors ask me ‘Why would I give you money?’ which is a very valid question, and I don’t have the answer to it."

So six months ago, he launched Fathalla, Salanekly & Co, a small consulting firm for commercial entrepreneurs that was recently acquired by Delta Shield, an Egyptian SME fund. Last month, he joined a Swiss-based private investment group as a business development analyst.

"I decided to get a year or two of experience to have the track record I need to go back and raise the money," he says.

He clearly has his eye on the ball, but has a tendency to stretch himself thin. At one point in 2011, he was juggling jobs as an associate at an exotic travel startup company, Wild Guanabana while working at Educate Me as well as completing his university degree.

El Salanekly had a definitive experience on January 28, 2011, when he was shot in his foot during the protests on Kasr El Eini Bridge. He said the incident put things in perspective for him:

"I realized that I didn’t want to spend the rest of my life being part of someone else’s dream, I wanted to create my own," he says. "The revolution helped me become more articulate about what I want to achieve in life and have the guts to go for it."

One year later, he counts the Clinton fellowship as another milestone. After meeting with Bill Clinton in Washington DC, he presented his pitch to the Clinton Initiative Fellows: a social venture fund to work with microenterprises.

"I think they were really surprised that I was Egyptian and that I’d started ventures at such a young age," he says. "They had assumed that Egyptians don’t receive a high education that would enable them to compete internationally."

Ultimately, the experience of meeting 800 bright young people was both empowering and humbling to him, because, as he jokes, "I realized that for once I wasn’t the smartest kid in the room.”

El Salanekly is resilient in his optimism and ambitious, and views his country’s present situation as a great opportunity to give back.

"It’s the time to start up new community projects," he says. "There is so much we can do with the limited resources we have right now to work from the ground up."