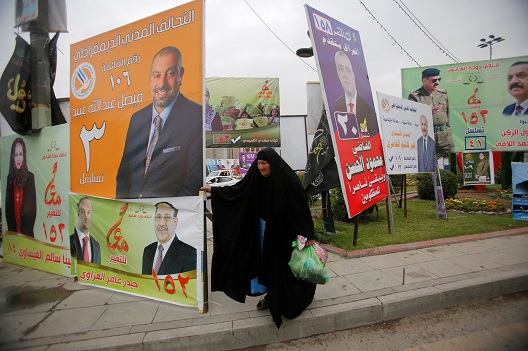 Iraq’s 2018 parliamentary elections, simultaneously embodying continuity and change, will be held in a particularly divisive atmosphere. The elections are taking place in the shadow of the devastation left behind by the conflict with ISIS and serious splits within the governing Shia party. As a result, voting on May 12 will be a litmus test for the mood of the country in the wake of a tumultuous few years.

With few exceptions, electoral coalitions are dominated by the same players who have presided over the political scene since the 2006 elections. While the faces remain the same, there are significant changes to the configurations of coalitions—the most striking of which is the fragmentation of the most dominant force in the political scene: the Shia groups.

There are a few surprises within this new configuration—most significantly, the division of the Dawa Party as a unified electoral entity into the Nasr and State of Law coalitions. Dawa has been the effective ruling party since 2005, with three successive prime ministers. Abadi’s 2014 appointment as prime minister, however, was followed by a power struggle with  his predecessor, Nour al-Maliki. Continued divisions between the pair caused a schism in the party, which came to a head during preparations for an electoral coalition. As a result, Maliki and Abadi formed two separate coalitions, neither of which bears the Dawa name, and Dawa candidates had to choose between the two. The disappearance of a unified Dawa is a major setback for the party, but some members insist that the party will be reunited following the elections. This may be a pious hope: many Shia will not be sorry to see the Dawa Party weaken, and relinquish its grip on power.

ISCI represents another split in the Shia ranks. For decades, the group has been a prominent rival of the Dawa Party, but has weakened considerably over the years. In 2012, the Badr Brigade, ISCI’s military arm, split from the group, and in 2014 joined Dawa’s State of Law coalition during the elections. Tensions between the young heir to the leadership—Ammar al-Hakim—and ISCI’s old guard have led to further rifts. In July 2017, Hakim, perhaps frustrated by pressures from the older generation and wishing to appeal to a younger electorate, broke with ISCI to form the Hikma Current, which is fielding its own coalition in the coming elections;

ISCI’s traditionalists, meanwhile, have joined forces with former bedfellows, the Badr Organization, under the umbrella of the Fatah coalition. Formed by the Popular Mobilization Forces, Fatah is expected to do well in the elections, capitalizing on its popularity as the paramilitary that fought ISIS, liberated, held territory and protected Baghdad, and having sacrificed hundreds of martyrs since 2014. It is expected to draw voters away from the other Shia coalitions and will likely play a decisive role in shaping a new government.

Muqtada Sadr has sprung yet another surprise. He has been leading an anti-corruption campaign—somewhat disingenuously according to his critics—calling for the “uprooting” of ineffective politicians and denouncing sectarianism. His populist message resonates with Iraqis fed up with self-serving politicians.

In an improbable pairing, the Sadr movement has formed a coalition with the Communist Party. The partnership follows two years of coordination between the Sadrists and the Communists in staging anti-corruption, anti-sectarian demonstrations in major cities. Sadr, like the Communists, has emerged as a strong voice against the political status quo. Several small Sunni and secular groups have joined this alliance, giving it a more pronounced trans-religious character than other lists.

What will this dispersed configuration mean in terms of votes? In 2014, the three Shia-led coalitions secured 155 parliamentary seats. State of Law (led by the Dawa Party) gained 92, ISCI 29, and the Sadrists 28, plus six allies. This was short of the 165 required for an overall majority, and they needed the support of the Kurds to reach an overall majority.

In the coming elections, the Shia vote will be split among five rather than three coalitions, none of which is expected to win the large number of seats gained by State of Law in 2014. Most observers expect Nasr, State of Law, and Fatah to achieve roughly similar results, leading to bargaining and jockeying among Shia leaders. This will also make them more dependent on the support of Sunni and Kurdish coalitions to form an alliance.

The traditional Sunni leadership has long been divided—more so than their Shia counterparts—and faces unprecedented challenges to its legitimacy.

The predominantly Sunni provinces hit hardest by ISIS feel abandoned by their politicians. IDP relief and post-ISIS reconstruction have prompted accusations of profiteering. Sunni leader have coalesced around two primary lists. Osama al-Nujaifi, one of Iraq’s three vice presidents, has formed a coalition with his brother, Atheel Nujaifi, governor of Mosul when ISIS stormed the city. Their coalition, Al-Qarar Al-Iraqi, will contest elections in Mosul and other Sunni-dominated provinces, but does not have a national reach.

Selim Jubouri, the current Speaker of Parliament, and Saleh Al-Mutlaq, former Deputy Prime Minister, have joined Ayad Allawi’s secular coalition. Allawi’s coalition, the Wataniya Alliance, with its anti-sectarian, ‘civic’ (a euphemism for secular) banner, has become the haven for prominent Sunnis as it was in 2010 when it won an overall plurality of seats in parliament. Other prominent Sunnis, including the cleric Abdul Latif Humeim, have crossed the sectarian divide and joined Abadi’s Nasr coalition.

Dissatisfaction with traditional politicians, especially in Mosul and Anbar, has also left a leadership vacuum, which is being filled by newcomers from tribal and civic groups. Province-specific coalitions have appeared in the Sunni provinces, some of which are genuinely local.

Following the fragmentation of the Patriotic Union, the growth of the Goran party, and the emergence of new dissident parties, the Kurds no longer present a united front.

The Kurds—unlike the perennially fragmented Sunnis—have hitherto been the decisive weight in the Iraqi political balance, crucial in the appointment of new prime ministers. While the Kurdish Democratic Party (KDP) has remained intact, the Patriotic Union of Kurdistan (PUK) has suffered from internal strife and splintering, spawning a number of smaller parties, the most prominent of which being Goran (Change), and more recently the Democracy and justice Party led by Barham Saleh, a former senior PUK official.  If the Kurds return to a united front after the elections in order to preserve their interests in negotiations with the federal government, they will resume their kingmaker role in the formation of a new government.

Iraq’s parliamentary elections are as much about choosing a prime minister as they are to elect members of parliament, and this unfolds in a process of negotiations, trade-offs, and arm-twisting that takes place after the elections, primarily within the Shia enclave. Multiple scenarios are possible, depending on a number of variables: the number of votes received by individual leaders; Iran’s ability to cajole and pressure Shia coalitions to from alliances; whether the Kurdish groups will come together again to provide the swing factor; and what input the United States may or may not have.

Iran will leverage its considerable influence to unite the Shia-led coalitions. The most ambitious scenario assumes a post-election alliance of at least four coalitions, a large enough number to require minimal support from Sunnis or Kurds to achieve an overall majority in parliament. In 2014, it was not difficult for Iran to persuade the three Shia coalitions to overcome their difference and unite under the banner of “the National Alliance.” In 2018, despite rivalries between Maliki and Amiri, it should be easy to persuade the State of Law and Fatah coalitions—both with close ties to Iran—to form an alliance. Hakim’s Hikma coalition, probably the weakest, may have no choice but to join. Less likely, but possible depending on election results, Abadi may bring his Nasr coalition into the alliance to stay in the game. The least likely to join such an alliance is Muqtada Sadr’s coalition because of its alliance with the Communists and Sadr’s known estrangement from Iran.

If, however, Iran is unable to yoke together Abadi, Maliki, and Amiri in a grand alliance, the result will be two powerful Shia camps, one headed by Abadi, the other by Maliki and Amiri. All three aspire to the post of prime minister for themselves or their surrogates. Muqtada Sadr’s Sairoon may then become an important factor in determining which camp has the greatest opportunity to form a governing alliance. Moreover, each camp will need to woo a sizable number of Sunnis and Kurds to form a parliamentary majority, and the possibilities will be more open-ended.

The Kurds, who played a decisive role in the selection of the prime minister in 2010 and 2014, can still influence the choice. This could spell bad news for several parties. Anger at Abadi for his tough stance following the independence referendum, fear of the PMF’s encroachment into Kurdish-claimed territories, and bitter experiences with Maliki over the course of eight years, could lead to the Kurdish preference for a new candidate. In contrast, the Sunnis view Abadi as less sectarian and more conciliatory and responsive to Sunni needs, than Maliki or Amiri are likely to prove.

Judging by the outcomes of previous elections, there are two constants: the candidate must come from one of the major Shia coalitions; and he must be acceptable both to Iran and to the United States. This was the established pattern in 2010 and 2014, when both Iran and the United States appeared to be in tacit agreement. Several developments serve as incentives to Iran to see a strong ally installed in Baghdad. Ever-rising tensions with the United States and the presence of US troops in Iraq are seen as an existential threat by Iran. Equally, the recently warming relationship between Saudi Arabia and Baghdad can undermine Iranian influence. Iran’s engagement in Syria and its ambition to create an uninterrupted supply route to the Mediterranean render a friendly government in Baghdad a necessity. Iran also needs an ally in Baghdad to secure its economic interests. In contrast, the current US posture in Iraq appears to be focused more on fighting terrorism than on building a long-term alliance, and it is an open question how much influence the US wishes to or can have following the May elections, compared to the influence it wielded in 2010 and 2014.

Prime Minister Abadi has tried to pursue a policy of balance between the United States and Iran over the past four years, declaring repeatedly that Iraq should not become an arena for proxy wars between the pair. The election results and the various scenarios for post-election alliances could lead Iraq in one of two directions: a continuation of this “neutral” road or the adoption of more eastward-looking policies.

Rend Al-Rahim is a former Iraqi ambassador to the United States, served as a senior fellow for Iraq for the US Institute for Peace, and is the co-founder and president of the Iraq Foundation.

Image: A woman walks past campaign posters of candidates ahead of parliamentary election, in Baghdad, Iraq April 22, 2018. REUTERS/Khalid al Mousily