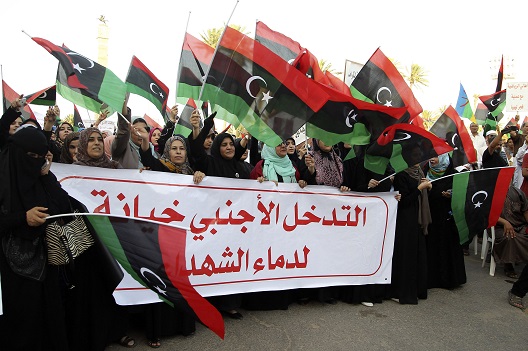 Chaos rules the day in Libya. Since the elections for the House of Representatives in late June, the already unstable transition has fallen further off track. The four major threats to a positive development of Libya are the inability of the government to impose its will and retain the monopoly on violence, the rising influence of radical Islamists, the legacy of the chaotic administration of the state under the Qaddafi regime and the multitude of century-old tribal conflicts in several parts of the country. The rise of federalism coincides with the Qaddafi-regime’s legacy of neglect toward Cyrenaica and the perceived continuation of that policy by the current government. Libya’s international partners must begin to think seriously on the options for direct intervention.

The next government will unlikely muster the forces needed to get the country under control. Each successive government since the end of the Qaddafi regime fell victim to blackmail by various militias in their struggle over power, territory, and economic interests. No parliament or government can function under such circumstances.

A full-fledged civil war is at hand. The international community has several options to prevent a catastrophe on Europe’s doorstep, but longer it waits, the more entrenched warring factions become. An international military intervention in Libya is a last resort measure, but as armed groups threaten to tear Libya’s fragile transition apart, the need for direct intervention grows. The recently elected House of Representatives has already acknowledged this need, calling for greater international support.

A Peace Support Operation (PSO) limited to the greater Tripoli area in order to stabilize the situation in and around the capital could make a significant difference and would be a viable option. The objective should be to allow the government to consolidate itself and to build up reliable security forces able to maintain a safe and secure environment at least in the capital. Having achieved this, the government must expand the security-and-prosperity bubble beyond Tripoli’s borders to help stabilize the whole country.

The preconditions needed for the employment of an International Stabilization Force in Libya include:

Achieving long-term sustainable security across Libya will depend strongly on the ability of the Libyans to build up their own security forces. Therefore, the International Stabilization Force must include a training dimension that utilizes international expertise to assist in developing and building the capacity of Libyan security forces’ training structures and institutions.

The international forces must contain a diverse collection of other experts (or “state-building teams”) to implement a proper international support strategy for building the Libyan state. Libyans should guide these efforts by extending an invitation to the leading nation or organization and having direct input into deciding who should provide the bulk of the International Stabilization Force. In any case, it can be assumed that enabling capabilities will be required from Western countries.

As “all politics is domestic,” the upcoming US presidential elections will undoubtedly affect the feasibility of this venture. President Barack Obama, demonstrably hesitant to intervene in other Middle East conflicts, will not want the Democrats to enter 2016 with a major campaign in Libya, particularly if Hillary Clinton chooses to run. The desired end state of the mission must be within sight in early 2016 if the United States is to play a significant role.

A PSO in Libya will not occur without risks, which the international community must carefully assess. Militias will no doubt feel threatened by the presence of foreign soldiers on Libyan soil and terrorist organizations like Ansar al-Sharia and al-Qaeda in the Islamic Maghreb (AQIM) will use the opportunity to attack peacekeepers and promote their adversity to Western intervention. Depending on the volatility of the developments on the ground, an International Stabilization Force could also be compelled to use force against one or more militia groups. Libyans could perceive such an incident as the end of impartiality and potentially dragging the operation into the civil war.

The House of Representatives and the future Libyan government may also face challenges to their legitimacy from former members of the General National Congress or other parochial interests. The most dangerous challenge to the legitimacy will likely come from moderate Islamists who lost ground in the elections and the radical Islamists who reject Western-style democracy. Government instability could certainly complicate matters for the International Stabilization Force, resulting in a high level of risk for the security of the international personnel. After heavy costs in Afghanistan and elsewhere, the majority of Western nations will not likely intervene unless advocates can clearly articulate vital interests at stake.

With only a narrow window of opportunity for launching a PSO in Libya, partners and allies must act quickly to prevent the country from disintegrating. Given that the political decision-making process and the force-generation for multinational operations takes several months, the urgency of initiating the discussion cannot be underestimated. If the debate starts only when Libya´s next government has failed, it will already be too late.

Wolfgang Pusztai is a freelance security and policy analyst. He was the Austrian Defense Attaché to Libya from 2007 to 2012.

Image: Demonstrators protest against the Libyan Parliament's decision to call on the United Nations and the Security Council to intervene to protect civilians and state institutions in Libya, at Martyrs Square in Tripoli August 15, 2014. Several thousands people rallied in Tripoli, Benghazi, Misrata and other cities against the Congress, which has called on the United Nations to protect civilians. Gunmen attacked protesters in Martyrs Square in downtown Tripoli, and police responded by opening fire, a Reuters reporter said. It was unclear if there were any injuries. The banner reads, "Foreign interference is a betrayal of the blood of the martyrs." (Photo: REUTERS)