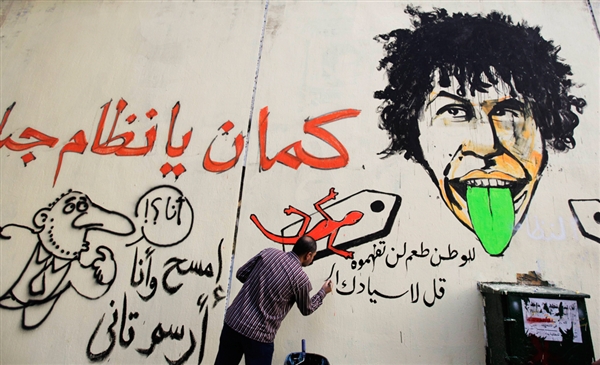 The Arab Network for Human Rights Information (ANHRI) published a report (Arabic) about the current state of freedom of expression in Egypt, under President Mohammed Morsi. In a statement announcing the report, ANHRI pointed to the “absence of the regime’s political will in Egypt, under the rule of the first civilian-elect president, to respect the freedom of opinion, expression and freedom of the press after three months of Morsi’s rule."

The statement goes on to list the various types of violations against freedom of expression that Egypt has witnessed over the past three months – with everything ranging from physical assaults on members of the media, to legal action taken against them, as well as several cases of outright censorship and the most recent surge in blasphemy cases. In total, the report documents 43 violations that have occurred in the past three months.

ANHRI highlights the fact that Morsi made no mention of ensuring freedom of press or expression as part of his 100-day plan, adding that any expectation to see problems of this kind resolved in such a short period of time would be unrealistic. That said, the alarming increase in incidents in which these freedoms have been violated prompted the organization to issue the report.

While Egypt witnessed a crackdown on freedom of expression during its 17 month period of military rule under the Supreme Council of the Armed Forces (SCAF), the attacks on these freedoms have only continued under Muslim Brotherhood rule, particularly in regard to cases brought against actors and artists, including Egyptian actor Adel Imam who won his appeal in a case in which he was accused of defaming Islam.

The report divides the violations in 8 categories:

Censorship: ANHRI has documented 12 cases of censorship, in which articles were prevented from appear in state and independent newspapers and magazines including al-Akhbar (3), Akhbar al-Adab, al-Ahram (3), al-Gomhorreya (2), TV and Radio Magazine (مجلة الإذاعة والتليفزيون), al-Mossawer and Akhbar al-Youm.

The articles were not published either because they contained content critical of the Muslim Brotherhood, of the Shura Council’s control of the press, the Ministry of Information – or simply because the journalist or author had made critical comments of the Brotherhood in the past. In the case of Akhbar al-Youm, the entire opinion section of the newspaper was censored on August 15.

Physical Attacks: ANHRI lists 3 incidents of physical attacks on journalists and critics of the Muslim Brotherhood.

Legal Cases: The Muslim Brotherhood Supreme Guide, Mohamed Badie filed a lawsuit against Adel Hammouda, the editor of al-Fagr and Adel Hanafi, the newspaper’s managing editor, accusing the pair of libel and slander, over an article entitled “Secret Brotherhood documents about confronting Salafis, SCAF and non-Islamist presidential candidates.” ANHRI also lists the cases against Dustour editor, Islam Afifi, and al-Fara’aen owner Tawfiq Okasha, as well as two additional cases. FJP lawyer, Ismail al-Weshahi filed a lawsuit against Abdel Halim Qandil, editor in chief of Sawt al-Umma accusing him of the same charges brought against Afifi: insulting the president, and spreading false news and spreading panic. Lastly, a case has been brought against the team of Naharak Sa’id, a program broadcast on state channel, Nile Life, after a guest criticized the Brotherhood’s Nahda (Renaissance) project.

Hisbah: Seven ‘hisbah’ related cases were documented by ANHRI. According to the hisbah principle, all Muslims have the right to file lawsuits in cases where “an exalted right of God has been violated.”

Blasphemy: ANHRI lists four of the blasphemy cases that have recently come to light in Egypt.

Restrictions on the Arts: Censorship authorities banned Amr Salama’s film Lamo’akhza (Excuse me), claiming that it would sow sectarian strife between Muslims and Christians. After modifying the script and changing the title, despite receiving an award from the Ministry of Culture, censors turned the film down again, this time for allegedly defaming the Ministry of Education.