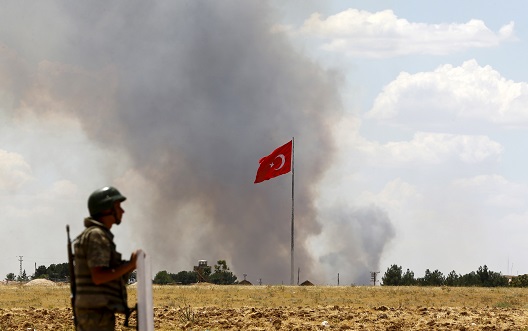 The town was a key transit route for goods smuggled from Turkey to ISIS’ de-facto capital, Raqqa, and into its Sunni-dominated strongholds in Iraq. It also separated the two Kurdish cantons of Kobani and Jazeera. Uniting the two cantons now allows the YPG to move fighters and weapons from areas inside Iraqi Kurdistan (Sinjar) out to the Euphrates River in Syria. The PYD now controls some 385 kilometers of the Turkish border, raising fears in Ankara that the group’s sister party, the Kurdistan Workers’ Party (PKK), could benefit from the establishment of a de-facto Kurdish statelet in Syria, dubbed Rojava.

In as early as March 2011, Turkish policymakers worried that the then nascent Syrian protest movement could threaten the rule of its then close ally, Syrian President Bashar al Assad. Ankara initially chose to try to convince Assad to reform, rather than call for his removal, basing this policy in part on Turkey’s concerns that the overthrow of Assad could empower the PYD and lead to the breakdown of state authority in Kurdish-majority areas. Turkey continued this policy until September 2011, before concluding that Assad’s grip on power had weakened and that popular discontent would force his inevitable ouster. Changing tack, Ankara called on Assad to step down in November, began cultivating the Syrian opposition, and arming its military wing—the then nascent Syrian insurgency.

For Turkey, the nature of the conflict shifted in July 2012 after Assad withdrew his forces from Kurdish majority areas along Turkey’s border. The PYD subsequently took control of government buildings, concluded an uneasy and informal nonaggression pact with the regime, and formed a rudimentary government. Ankara has since followed a dual-pronged strategy, economically isolating the Kurdish controlled areas while pressuring the PYD’s leadership to join the formal Syrian opposition. In certain instances, Turkish-backed rebel groups have clashed with the PYD. Syria’s Al-Qaeda affiliate, the Nusra Front, took part in these clashes. Along with its ally Ahrar al-Sham, Nusra controlled Tel Abyad before ISIS defeated it in 2014.

Turkey’s support for Ahrar al-Sham and, at times, Nusra ultimately birthed the now widely held belief among Kurds that Ankara supported ISIS in its war against the PYD. To date, no evidence supports this claim. While the 2011 decision to allow for the transit of foreign fighters to Syria to aid the rebellion provided ISIS with much of its foreign manpower, the growing perception of Turkish-ISIS cooperation has damaged Ankara’s reputation internationally and undercut the political appeal of the Justice and Development Party (AKP) with Turkey’s Kurdish population.

Since ISIS split from Nusra, its blitzkrieg offensive has worked at cross-purposes with Turkey’s sustained—and continuing—efforts to unite the various insurgent factions in the north. In recent months, Turkey has had some success, particularly in Idlib, after the recent formation of Jaysh al Fateh—an Islamist-heavy umbrella group that has the support of a myriad of nationalist Free Syrian Army brigades.

Turkey shares the US policy objective of ending the conflict in Syria, but both countries differ in how to go about achieving it. Turkey favors the use of air power and ground forces to overthrow Assad, create safe zones for refugees, and empower the Syrian National Coalition to assume governance of a centralized Syrian state. The United States, in contrast, narrowly focuses on targeting ISIS, in order to build up the Iraqi state, while working with regional states and Russia to put pressure on Assad to resign. This divergence in preferred tactics explains Ankara’s hesitance to take kinetic action in conjunction with other anti-ISIS coalition members.

These political differences withstanding, both Ankara and Washington also share a commitment to the maintenance of Syria’s territorial integrity. In recent weeks, the PYD’s gains have raised concern in Ankara about a so-called Kurdish corridor that could cut-off Ankara from the rest of Syria. Turkey has now threatened to intervene in the city of Jarablus, an ISIS stronghold that the PYD has indicated that it will try to take in the near future. A Turkish ground invasion—however unlikely—would theoretically cut off ISIS’s final border stronghold while preventing the PYD from moving further west to link its territories with the Afrin canton.

Like with ISIS, Turkey views the PYD’s tactics in Syria as detrimental to its efforts to unite the Syrian insurgency. Given the PYD’s relationship with the PKK, in certain instances in the Syrian civil war Ankara had an interest in the rebels and the PYD battling against one another in bloody and costly clashes. This tactic, however, eventually displeased the United States and prompted US intervention on the side of the PYD.

During the ISIS led siege of Kobani, for example, the global outcry forced the US to change tactics and create a conduit for the PYD’s militia, the YPG, to direct coalition air strikes. The United States has continued to support the YPG, its air strikes critical for the group’s expansion to areas some 30 miles from ISIS’s de-facto capital city, Raqqa. In western edges of Kurdish held areas, US air strikes have hit ISIS targets in Jarablus.

Turkey, in contrast, now accuses the PYD of working at cross-purposes with the Free Syrian Army and claims that the group actually strengthens Assad’s grip on power. Turkish officials have since claimed that Assad and ISIS work together in certain areas to defeat the FSA—indirectly linking all three groups as loosely cooperating to defeat the rebels that Turkey supports. The United States has yet to comment on the allegations, but its continued support for the YPG suggests that the claims have not altered US policy.

These key divergences foretell continued US-Turkish tensions about how best to execute the war against ISIS in Syria. For now, Washington appears committed to the Syrian Kurds, whereas Ankara contemplates ways to stop their advance. Ankara will adopt different tactics, most probably using overt military support for the Syrian rebels along the border. This support raises the likelihood of Turkish-Kurdish clashes in certain areas at a time when the YPG has made significant gains against ISIS. This divergence will exacerbate US and Turkish differences over the future of Syria and potentially feed more tensions between the two countries.