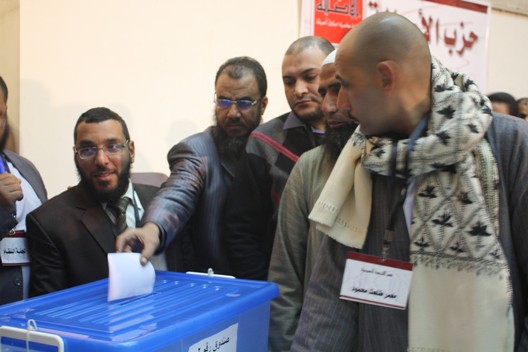 In order to reverse a coup d’état, Egypt needs a coup d’état. This, in brief, is the solution to Egypt’s crisis offered by Hani Fawzi, general secretary of the Cairo-based Salafi Asala Party. It must be prompted, however, by massive protests. No longer simply the domain of the Muslim Brotherhood and Salafis, the anti-coup movement is attracting both professionals and Christians – or so he believes.

Rather, this is what he prays for. A few days prior to the violent dispersal of the pro-Morsi sit-in at Raba’a al-Adaweya, Fawzi suffered a massive heart attack while sleeping in the near-by offices of the Asala Party in Nasr City. Found and hospitalized the next morning, unlike some of his colleagues he avoided the violence and mass arrests, but in his recovery has been reduced mostly to seeking divine intercession.

This, according to Fawzi, can come only through the army, as they are the only ones with the power to bring down Abdel Fattah al-Sisi, the Minister of Defense, and Mohamed Ibrahim, the Minister of the Interior. There have been indications, he hears, that not all generals have been pleased with Sisi’s leadership. The rumor mill has churned with such stories; a bearded taxi driver told me the other day that Sisi had three opposing generals killed.

Fawzi doesn’t want to put stock in rumors, but does notice that several generals have been very quiet. Should one of them undo the coup, it should set in motion what Morsi should have done upon his election. On this he admittedly draws on the rhetoric of Salafi firebrand Hazem Abu Ismail, who argued for a radical cleansing of the state apparatus. Fawzi finds him too divisive a figure, but Morsi could have made it work.

There are four primary sources of power in Egypt, he notes: The army, the police, the judiciary, and the media. Each one needs to be divested and reshaped. But did not Morsi attempt this? He replaced the heads of the army and police with Sisi and Ibrahim; obviously, this did not work out very well for him. Furthermore, he fought the judiciary and brought defamation charges against media figures. In both he failed, resulting only in greater institutional and popular opposition. Where did he go wrong?

With the army, it was in his choice of Sisi. Many analysts believe Morsi had no real influence in the matter, but Fawzi recalled the great popular backing the president won when he sacked Tantawi and Anan. With this approval, Fawzi argues, he should have moved quickly with a reform agenda. Revolutionary tribunals should have been conducted to try the reactionary figures of the old regime. This would have bypassed the judiciary, whose members would also have been evaluated one-by-one to determine their participation in corruption. Tamed, only judges partial to the law would remain.

Reforming the police would require complete initial dissolution. Fawzi admits this would cause social disruption over a period of three to four months, but asks would it have been worse than the security vacuum which existed anyway? Popular committees in each neighborhood could fill the void as they did during the revolution, during which time junior officers would be vetted and placed in positions of authority. Properly empowered, with corrupt leadership removed or tried by tribunal, the rest of the corps would fall in line.

With the media Fawzi was more cautious. They must be free even to criticize, but he finds many invent tales or sensationalize even small missteps. Some sort of censor must be established to review their performance and hold them accountable. No outlet should be closed, however, contrasting the current government’s anti-democratic nature in the shutting of Salafi satellite stations.

Morsi, however, reacted to events rather than directing them – as in his effort to bypass the judiciary during the constitutional crisis. In this he was seen as opportunistic and siding with his supporters alone.

This, Fawzi admits, was Morsi’s key mistake: He failed to keep the people with him, leaning disproportionately on the Brotherhood and allied Salafis. He could have maintained their support, if only he had addressed them all, and governed on behalf of all.

Fawzi’s confidence stems from his belief the popular opposition to Morsi was largely created by military intelligence. They drove the Tamarod Campaign, and on June 30 filled the squares with some discontent Muslims, thousands of Christians – as is their right, he assured – but mostly with army personnel.

But the church did not have the right to interfere as an institution, referring to Pope Tawadros praising Tamarod just before the military intervention. Even so, the subsequent attacks on churches were not from Islamists, as Fawzi gathered from YouTube clips of priests stating as such. It was some combination of state-sponsored thuggery and criminal actions, whereas in reality Islamists defended them. It could not be otherwise, he insisted, with Egypt’s dhimmis – using the word for Jews and Christians under the caliphate – who are entitled to assurances of protection.

Yet despite Fawzi’s comprehensive analysis of what Morsi should have done, Morsi himself was completely absent from his description of events after the reversal of the coup. Here he was unclear on what should happen next, insisting only that the military go back to its barracks and set in motion the process of revolutionary tribunals to institute the above reforms.

But on one point he was absolutely clear: To get there required a peaceful commitment. He knows no fellow Islamist tempted by violence or beginning a path of insurrection. The army, as well, must not be split. The ‘Free Egyptian Army’ scenario as modeled by Syria would be a disaster for Egypt.

In the end, like almost every other political stream in Egypt seems to believe, the answer lies in the military. The people must force them, give them a mandate, but then hope they will be trustworthy to grant their favored outcome.