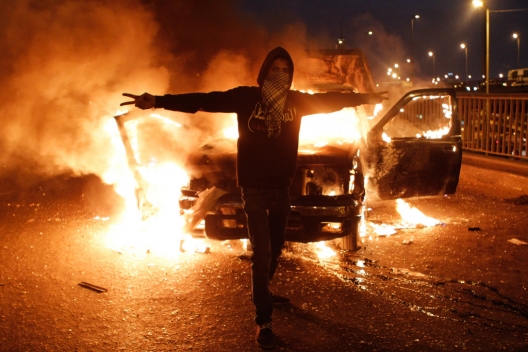 There are two types of terrorism in Egypt today, and neither fits exactly the traditional Western usage. Rather than an indiscriminate violence against innocent civilians, both target almost exclusively the security state.

The first and most public face of terrorism is claimed by groups such as Ansar Bayt al-Maqdis and Ajnad Misr, perpetrating deadly attacks and garish bombings. Authorities link these activities to the Muslim Brotherhood, but have yet to conclusively prove this accusation. In response, the Brotherhood reiterated its commitment to absolute peacefulness.

The second and more nuanced face of terrorism is claimed by groups such as the Execution and Molotov movements, as described by the Washington Institute’s Eric Trager. They are movements whose tactics are closer to vandalism, with some calling for the targeting of police officials, or their property. No matter the degree to which they desire the death of security figures for their role in dispersing the pro-Morsi Raba’a al-Adaweya sit-in, in strategy they seek to employ lower level violence and generally ‘terrorize’.

This second type of terrorism has recently been endorsed by a Muslim Brotherhood-friendly cleric. But strategically, he backs away from the first.

Sheikh Mohamed Abdel Maqsoud Afifi is the deputy head of the Salafi Legitimate Authority for Rights and Reform, of which the Brotherhood’s Khairat al-Shater was a prominent member. He is also the brother of Adel Abdel Maqsoud Afifi, founder of the Salafi Asala Party which ran with Nour in the parliamentary elections but allied closely with Mohamed Morsi during his presidency. In the run-up to the Tamarod protests of June 30, the precursor to Morsi’s removal, the sheikh called these demonstrators ‘unbelievers.’

Recently on the Istanbul-based pro-Brotherhood channel named Raba’a Sheikh Afifi called on Muslims to resist the coup, but not with weapons. “This will enable them to commit their crimes against us with full freedom,” he said.

It is not that the use of weapons is wrong, however. Afifi quotes the 10th Century jurist Ibn Hazm to say that such fighting is prohibited if it will not prove victorious. Since the security forces are better armed, this strategy will backfire, he explains.

“All we can try to do is terrorize them,” Afifi continues, “by burning their cars, threatening them, burning their homes, and other such efforts.” He says this is consistent with peaceful resistance and alleges it is legitimate under sharia law.

The verse he relies on – at least for the latter – is Qur’an 8:60, which states: “And prepare against them whatever you are able of power and of steeds of war, by which you may terrify the enemy of God.” The word for ‘terrify’ in Arabic is the root of the word for ‘terrorism,’ but the context is of war. From Native American war paint to the US ‘Shock and Awe’ campaign in Iraq, the tactic is common. If the enemy can be frightened into submission – by whatever means – the battle is rendered easier, and prolonged fighting might not even be necessary.

Even so, the idea is uncertain to at least one of the sheikh’s followers. “It is a way among many ways to resist the coup,” said Hani Fawzi, general-secretary of the Asala Party, very hesitantly. “But maybe it will work only five or ten percent.”

The idea behind this reasoning, Fawzi explains, is that if enough police officers are scared by such tactics, they will think twice about how they deal with protestors. It may even cause division within the police force and threaten internal collapse.

Fawzi has often been taken to the police, and he goes willingly when they treat him with respect. But recently in accosting political opponents, he says, they barge into homes, destroy property, and generally, well, terrorize. He says they deserve the same.

But Salafism puts a high premium on human life, he assures. What if in setting fire to a car or home an officer was killed unintentionally? God will hold the assailant accountable for this action.

There are other ways that are more effective, believes Fawzi, including continued protest, international arbitration, and the hope of a deteriorating economy. With a frustrated laugh he comments on the multiple hour long power cuts suffered in his Helwan neighborhood and elsewhere in Cairo, and the increased demand of summer has not even started.

Slowly people are turning against the government, Fawzi says, relating an expletive-laden outburst from his neighbor aimed at both Morsi and the coup. The anger is building.

But it is also being channeled. Seven months ago when interviewed, Fawzi knew of no Islamist tempted toward violence. Now he himself is sympathetic, though reluctant.

“They are trying to drive us toward a Syrian scenario,” Fawzi complained, aware of the reinforcing loop of this low level terrorism.

But like Sheikh Afifi, he admitted its license was both peaceful and legitimate. Unfortunately, the inevitable result will only mire Egypt deeper in ongoing retributive violence, risking decent into terrorism more familiar to the West.

Jayson Casper is a writer with Arab West Report, Christianity Today, and Lapido Media. He authors a monthly newsletter on Egyptian politics, religion, and culture through his blog at A Sense of Belonging, and can be found on Twitter at @jnjcasper.