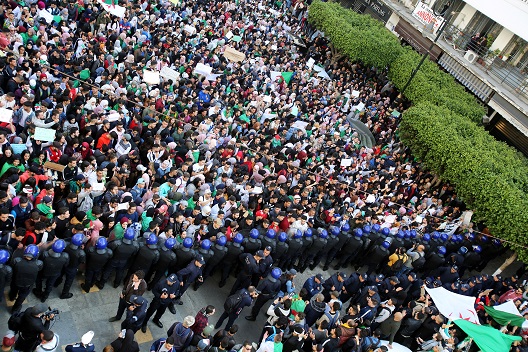 The recent demonstrations in Algeria are the latest indicators of a shifting tide. The majority of the population has become disenchanted with the elite—or the “pouvoir.” In addition to their commitment to old values and unfulfilled promises, they maintain a tight control over the government. Now, younger Algerians are taking to the streets to show their frustration. By doing so, they are breaking the long held regional taboo about debating politics publicly for fear of retribution or getting arrested—and now are going so far as to make demands. “We want [President Abdelaziz] Bouteflika to go, enough, we want change and we want change peacefully,” said Mohamed Aissiou, an avid protestor and engineer.

This comes as a major shift from the decades-long norm of avoiding negative political expression in exchange for continued peace within the country. Bouteflika is credited with ending a bloody civil war that resulted in the deaths of 100,000 people. Post-war, he became president and Algerians have avoided political dissent to maintain stability. Protests in past years, beginning with 2011’s Arab Spring uprisings, show this is changing. These most recent demonstrations, in particular, are seeing the largest crowds to protest in the last decade. They are also coming with a specific demand—for President Bouteflika to not run for a fifth term.

Bouteflika has been in office since 1999, but has made few public appearances since a stroke in 2013. This has not stopped him from winning elections or hiring and firing top government officials. In light of his incapacitation, opposers of Bouteflika charge that he is not running the country. Instead, they believe that his close advisors, including his brother, Said, are ruling. There were rumors that this close circle would replace Bouteflika with another FLN-friendly candidate. However, they were apparently unable to agree on someone and decided to nominate Bouteflika again. Now, Algerians are unhappy that they have not had a say in Bouteflika’s decision to run again. The lack of free elections all but ensures a fifth term for him.

Young Algerians seem to be a driving force behind these protests. The country’s largest population segment is the youth, with 70 percent of Algerians under thirty and half of the population under twenty-five. In light of this, the unemployment rate for Algerians between the ages of 15-24 years is 29 percent and has a negative impact on the country. In addition, the government is heavily reliant on oil for revenue, but recent oil prices dropped leading to decreased revenue and a cut in spending on services. The GDP reflected this drop by decreasing 0.8 percent, exacerbating an already crushing unemployment rate.

As protests gained traction, Bouteflika’s absence was notable. He left Algeria for medical treatment in Switzerland the last week of February. From there on Sunday, March 3, he confirmed his intention to run for a fifth term. The announcement came via a letter submitted by his campaign manager, Abdelghani Zaalane. In an apparent effort to mollify protestors, the letter said that should Bouteflika win this election, he would not run again in the future. Additionally, Bouteflika has pledged to call for early elections, only if he is elected, within the next year. He also plans to organize a national conference “to open the way for a debate to consider proposals to amend the constitution and decide the timing for early elections.” He acknowledged the protestors, writing, “I listened and heard the heartfelt cry of protesters and in particular of the thousands of youth who asked me about the future of our country.”

These promises are unlikely to appease the demonstrators. Many feel they have heard promises of reform before, only for them to remain unfulfilled. They are calling for even more drastic measures than Bouteflika not running again, including scrapping the election altogether and for a complete reform of the country’s government. One parliamentarian, Sidi Farouki, has already resigned in response to Bouteflika’s bid for a fifth term.

In response to the protests, the government has gradually escalated its response. Protests have been banned in the capital since 2001, where the largest protests are taking place and security forces are actively working to contain the demonstrations. Additionally, the government has disrupted access to the internet and state-run media agencies imposed a blackout on coverage of the protests. A leader of Bouteflika’s FLN party, Mouad Bouchareb, “scornfully told the demonstrators: ‘To all those calling for change: I say dream on, and sleep well!’”

“It’s a republic, not a kingdom!” Protestors responded, while others said, “You’ve stolen the country.”

As protests continue, the government security response is to increase its force. Security forces recently beat protestors, fired water cannons, and launched tear gas into crowds. Hundreds were injured and one man died in the protests on Friday, March 1. They spanned over 40 cities, including other major cities such as Annaba, Oran, and Constantine. Solidarity protests are also taking place in London, Berlin, and France, which houses a large Algerian community.

Six candidates have registered for April’s election. Among the candidates are retired general Ali Ghediri and car mechanic Rachid Nekkaz. While two opposition parties announced their intention to boycott the election.

Feb 21-23: Thousands of Algerians march in a peaceful demonstration against the corruption and oppression under the current regime, after president Abdelaziz Bouteflika announced his candidacy to run for a fifth term as president. Meanwhile, Bouteflika, eighty-one years old, travels to Switzerland for routine medical treatment, according to state media.

Feb 24: Protests in Paris, at Place de la Republique, emerge in solidarity with those demonstrating in Algeria against Bouteflika’s fifth term. However, the situation in Alegria escalated when the Algerian police used tear gas in an effort to disperse the crowd, and discourage the protestors.

Feb 25-26: The youth of Alegria mobilized with several student protests and demonstrations in universities across Algeria. Internet outages and disruptions were also reported.

Feb 28: Efforts to discourage the protesters continued when PM Ahmed Ouyahia threatened the demonstrations by indicating how the situation in Syria first escalated, “In Syria protests began with flowers then ended in blood.” Reports also indicated that journalists have faced violent reactions from Algerian officials and many have been detained and arrested.

March 1: Reports of tens of thousands of protesters marched the streets of the capital Algiers, Constantine, and other regions throughout Algeria. The demonstration in Algiers was the largest since 2011’s Arab Spring uprisings. Djamila Bouhired, a famous Algerian activist, stepped out in support of the demonstration. The Algerian Police and the Gendarmerie stayed clear of the demonstrators. These protests gained traction online via social media using the hashtags, #NonAu5emeMandat, لا_للعهدة_الخامسة# (#notoafifthterm), and حراك_1_مارس# (#March1movement) despite the restricted internet usage.

March 3: Protest continue to emerge all over Algeria, including cities such as: Algiers,Skikda, Constantine, Setif, Bejaia, Guelma, Mila and Jijel. People in Berlin show their support for Algerians by joining in protest as well. Abdelghani Zaalane, President Bouteflika’s campaign manager, announced on national television that Bouteflika will run for a fifth term as president, but has promised to organize a national conference to hold early elections to find a new president for Algeria, in which he will not run.

March 4: Sidi Faroukhi, former cabinet member, resigned from parliament, rejecting Bouteflika fifth bid. Continued support for the Algerian protest is seen as people march across the streets of London, crossing paths with Sudanese protesters who are also calling for the resignation of their long serving President, al-Bashir, who has ruled since 1989. Despite Bouteflika’s offer to hold early elections and his assurance that he heard protestors, Algerians still took to the streets to demand the president not run for a fifth term.

Sarah Aljishi and Ellen Jacobs are interns with the Rafik Hariri Center for the Middle East at the Atlantic Council.

Image: Photo: Students take part in a protest to denounce an offer by President Abdelaziz Bouteflika to run in elections next month but not to serve a full term if re-elected, in Algiers, Algeria March 5, 2019. REUTERS/Ramzi Boudina