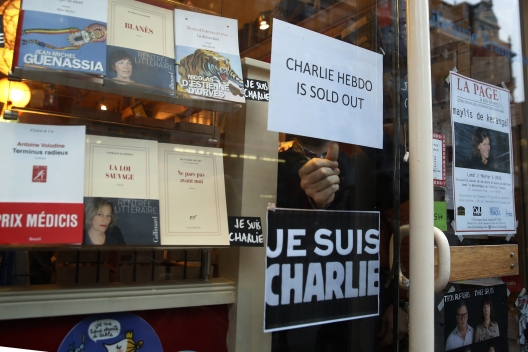 Photo: A sign is fixed into a shop window as copies of Charlie Hebdo sell out in London January 16 (Reuters)

Prime Minister Ibrahim Mahlab was handed the power to outlaw the distribution of foreign publications in Egypt, as per a decree issued by President Abdel Fattah al-Sisi on Tuesday. The order allows Mahlab to ban publications deemed “offensive to religion or publications promoting erotica in a way that can disturb the public peace.” At the time of writing the law has yet to be published in the official gazette.

Egypt, a predominantly Muslim nation, is in the middle of its own struggle for freedom of expression. This latest decree, depending on its application, could threaten that freedom further, but in Egypt many believe there should be a limit to this, especially when it comes to insulting religion.

The decree follows the publication of the latest issue of French satirical magazine Charlie Hebdo, which controversially depicts the Prophet Mohamed in its first issue since last week’s deadly attack by militants on the magazine’s office that killed twelve. The first run sold out in France in hours, prompting the magazine to raise the print run from its usual 60,000 to 5 million.

For this reason Fatma Serag, Legal Unit Director at Association for Freedom of Thought and Expression, believes that the decree was issued to prevent copies of the magazine from coming to Egypt. She added that the government moved to “avoid the outbreak of demonstrations by hardline Islamists, particularly the Salafist movement.”

A similar push has been made from the country’s religious authorities. Al Azhar, Egypt’s leading Islamic authority, called on Muslims to ignore the cartoons, while Ibrahim Negm, Senior Adviser to the Grand Mufti, urged Muslims to “maintain self-control” and “not to engage in the same bad scenario of reactions sparked after publishing Denmark’s cartoons.” In 2005, a Danish newspaper publishing derogatory cartoons of the Prophet Mohamed sparked violent protests in Egypt.

Days before the decree was issued, Egypt’s Foreign Minister travelled to Paris to take part in a unity march condemning the attacks, with an emphasis on freedom of expression. However Egypt itself has been vilified for its attitude towards media and free press. Reporters Without Borders ranked Egypt 159 out of 180 in its 2014 World Press Freedom Index, which much criticism has been leveled at the authorities and judiciary for the jailing of three Al Jazeera journalists last year, as well as the arbitrary detention of dozens of journalists.

Egypt’s cartoonists, however, like many others around the world, sketched in solidarity with Charlie Hebdo, highlighting their support for freedom of expression and the use of satire. Not all Egyptians share this view, with many believing that freedom of expression is a right, this right should end at offending the beliefs of others. Egypt’s journalism syndicate also held a rally in solidarity with the Paris marchers under the banner “in defense of the honor of speech and freedom of expression.” The same syndicate condemned Charlie Hebdo in October last year for publishing another image of the Prophet Mohamed, accusing it of being affiliated with a Zionist lobby.

Egypt is not the only country moving to stifle the distribution of the latest issue of Charlie Hebdo. A Turkish court ordered the blocking of web pages that featured the image and a search was ordered of one newspaper that announced it would publish a supplement featuring a selection from the new issue. The Turkish Prime Minister also took part in the Paris rally.

Serag said that, despite Egypt being a Muslim majority country, “the situation in Egypt is no different [to any other country], but the government took advantage of it.” She stated the government used the Charlie Hebdo controversy “as an excuse to impose government censorship.”

“This decision limits freedom of expression and is certainly contrary to international standards on freedom to express beliefs and freedom of opinion and expression as it is outlined in the Egyptian constitution,” said Serag.

The decree “did not elaborate and did not explain what is considered acts that insult heavenly religions,” said Serag. It will be up to the interpretation of the Prime Minister if a publication is to be banned or not. Ambiguous wording of laws have raised concern in Egypt in the past, a criticism leveled at the country’s restrictive protest law, a law allowing civilians to be tried before military courts, and a new anti-terror law.

Egypt also has a history of banning media related to religion. The censorship board banned in December the showing of Hollywood blockbuster ‘Exodus: Gods and Kings’ due to what was described as “historical inaccuracies,” The film is based on the biblical tale of Moses leading the Jewish people from slavery in Egypt with the help of plagues sent by God. Biblical epic ‘Noah,’ was shown despite condemnation from Al-Azhar, Egypt’s top Islamic body. In the view of Al-Azhar the film, based on the story of Noah’s Ark, “contradicts the stature of prophets and messengers … and antagonizes the faithful.” Both the book and the film ‘The Da Vinci Code’ were also banned for portraying a marriage between Jesus and Mary Magdalene, the decision coming as a result of pressure from the Coptic Orthodox Church. Even Kahlil Gibran’s The Prophet was banned in 1999 (temporarily), while certain translations of the Qur’an have faced a similar fate, for what has been described as inaccuracies.

Beyond the media, Egyptian authorities are also coming down on contempt of religion. In the latest in a string of similar verdicts over the past four years, a student was sentenced this week to three years in prison for Facebook posts in which he allegedly announced he was an atheist, and insulted Islam. In mid-December, police raided an ‘atheist café’ in central Cairo, while Dar al-Ifta expressed concern in December over the number of atheists in Egypt, which according to a regional polling organization are precisely 866.

Religion is an important issue for many Egyptians and has been a major topic of discussion in recent years. The ouster of Muslim Brotherhood President Mohamed Morsi in July 2013 and the ensuing crackdown on Islamists in Egypt made many distrustful of political Islam.

It is unclear how Mahlab will apply the new powers and it is also how much support there will be if implemented. Those in Egypt fighting for greater press freedoms could face opposition from their own countrymen when it comes to the issue of religion in the media.