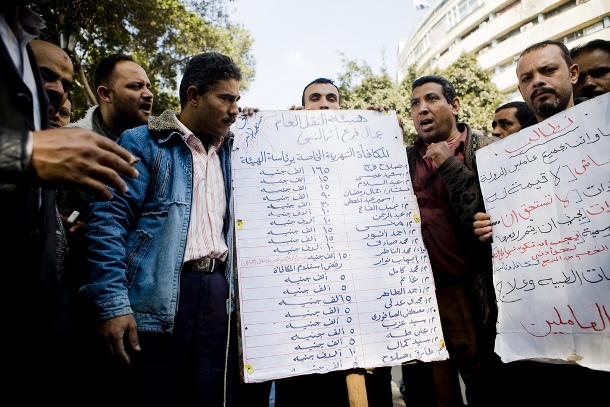 Following the evolution of socio-economic conditions in Egypt, it is evident that the situation has become critical, with social and labor protests increasing significantly over the past year. According to the Children of Earth Foundation for Human Rights  (Moaa’saset Awelad El-Ard le Hokok El-insan), Egypt has witnessed 1,370 protests in the period from May 2011 to April 2012  From 2007 until 2010, the average number of protests did not exceed 700, while in the aftermath of the uprising, that figure has doubled.  This sharp increase should not come as a surprise, in light of the fact that country has enjoyed some relative political gains, while no comparable social gains have been made.

As a result, labor strikes have worked their way into all sectors of the economy, including civil service employees, with tax collectors and public transport employees joining the ranks of striking industrial sector laborers. ‘Bread and butter’ issues are often the driving force behind these strikes, accompanied by demands for the prosecution of corrupt leading figures. Last week, Mahalla El-Kobra, a city in the Gharbeya governorate witnessed a significant strike organized by the workers of Misr Company for Spinning and Weaving, which employs 24,000 workers.

This is the fourth strike organized by Mahalla workers since 2006. The first significant strike took place in December 2006, producing a spillover effect and increasing the number of labor strikes on the national level from 222 protests in 2006, to 614 in 2007, 609 in 2008, and 630 in 2009.  In 2012, the spillover effect was most obvious in the governorate of Gharbeya, where, just after the Mahalla labor strike ended, 3 other strikes were triggered in Samanoud, Tanta and Mahalla El- Kobra, in the textile and petrol sectors. In the meantime, the Misr Company for Spinning and Weaving strikes have been temporarily suspended after worker demands were partially met, with the looming threat of resuming strikes in September if further concessions are not made.

Any public discourse surrounding this, and other strikes throughout the country in the past year, has been punctuated by the fact that the Egyptian Trade Union Federation (ETUF), the official workers’ syndicate, and the country’s political forces have offered no real change for Egypt’s workers. As a result, in this strike, as in those preceding it, workers have refused the intervention of either party. The ETUF’s mediation is seen as meaningless, since the federation does not represent worker interests, and instead focuses on governmental interests. Intervention by figures from the political landscape is also seen as harmful, because the striking workers have rejected the politicization of their strictly economical demands. Workers have always been suspicious of political parties, and perceive them as agents aiming only to exploit workers for their own gain. This situation sheds light on the problems currently plaguing Egypt’s labor movement:  the lack of representation and the inability to address worker demands through political channels.

For this reason, one question needs to be asked: How can the labor movement play a more consistent role in Egypt’s transitional period, a role that can help it achieve its short and long-term interests?

Any labor movement needs to fulfill three conditions if it wants to influence a nation’s economic affairs in a way that serves or favors its own interests.

The first condition relates to the labor movement’s ability to achieve high labor union density in relation to the size of the labor force. According to the Central Agency for Public Mobilization and Statistics (CAPMAS), Egypt‘s labor force is made up of 23.346 million workers, 61.2% of whom are salaried.  Taking into consideration ETUF’s labor unions, as well as the new federations, established after the revolution, the Egyptian Federation for Independent Trade Unions (EFITU) and The Egyptian Democratic Labor congress (EDLC), it becomes evident that 50% of the labor force is not organized. There are two urgent steps that need to be taken:

(1) The Trade Union Freedom Law needs to be issued.  Hindered either by the SCAF or by the now-dissolved -parliament, the issuance of this law is not a luxury but rather is an urgent necessity in order to organize labor unions and ensure reasonable negotiations with their representatives. Otherwise, strikes and disruption remain the only way for workers to express dissatisfaction, as is currently the case.

(2) The ETUF is in need of reform, particularly since some labor leaders, as is the case in Mahalla, still prefer to hold elections within a reformed union rather than to create a new one.

The second condition that needs to be fulfilled relates to the ability to achieve a higher density of union affiliations in key areas of economic activity. New trade unions such as EFITU and EDLC have a relatively strong presence in the civil service and government sectors, enhancing their ability to influence and exercise organized pressure. However, the number of new trade unions among blue collar workers in the manufacturing industries remains very low. More efforts need to be made in organizing this sector, which is often subject to difficult working conditions.

The third condition relates to the ability of the labor movement to open political channels of communication in order to push its demands into the political arena. In several countries trade unions are affiliated with political parties. The latter has the duty of advancing worker interests, ensuring they appear on the government’s agenda. In Egypt, the situation is hindered by worker suspicion of political parties. This position can be understood when bearing in mind that political parties are still weak and bring very little to the labor movement. On the other hand, this perception is in need not only of change, but needs to be replaced with an alliance that could – as much as possible – achieve mutual interest for both parties.

There is still a long way go, but achieving the first step means that we are on the right path.

Nadine Abdalla is a PhD Fellow at the German Institute for International and Security Affairs (SWP) in Berlin and a writer for Egyptian newspaper, Al-Masry Al-Youm. Her research interests include labor movements in the post-Mubarak era and democratic transitions in comparative perspective, with a focus on Egypt and Eastern Europe. She can be reached at [email protected]