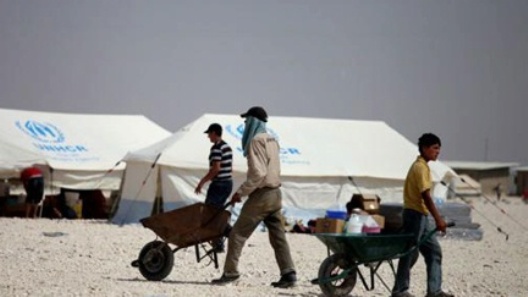 When President Barack Obama announced $1 billion in new loan guarantees to the Hashemite Kingdom of Jordan earlier this month, he reaffirmed what many here in Jordan have long felt: the Kingdom has been “very generous” in accepting nearly 600,000 Syrian refugees, who have placed “a great strain” on Jordan’s resources. While Jordanians have increasingly come to view the refugees as an untenable burden on their country’s economy, the reality is much more complex. Whatever strains Syrians have created in Jordan, they have also brought with them significant investment, and analysts maintain that Jordanian politicians have exaggerated the refugees’ negative impact in an effort to maximize aid dollars and distract from their own economic mismanagement.What is clear, however, is that the refugee presence has created acute tensions in affected areas, and these tensions will only increase as the conflict protracts. The Jordanian government—and its Western backers—are in urgent need of a long-term formula to ease the growing pressure on working class Jordanians and the refugees themselves.

Generally, it is difficult to refute the point that Jordan has been forced to shoulder an outsized portion of the burden from Syria’s spiraling refugee crisis. While difficult to pin down the exact cost of hosting the refugees—Planning Minister Ibrahim Seif’s estimate of $1.7 billion per year is almost certainly hyperbolic—there is no doubt the figure is significant in a country with a GDP of some $38 billion. Moreover,Jordanian politicians maintain that, in addition to the direct costs of hosting, Jordan has suffered from losing a major export market and overland shipping route in Syria.

Jordanian citizens note increasing pressure from the refugee presence, as over 470,000 Syrians—some 82 percent of the total refugee count—are living in Jordanian cities and towns rather than in camps. Jordanians say that this reality has contributed to rising housing prices and an increasingly competitive labor market. “I want to rent a house and the cheapest rent is 400 dinars ($565), when before it was 200 ($282),” says Kareem Madi, a twenty-seven year-old televisionproducer living in Amman. He added, “Companies started employing Syrians because they take lower wages than Jordanians.”

Some analysts insist that complaints about the refugee presence are overblown, and that the Jordanian government has used the refugees as both a means to attract Western aid and to gloss over their own policy blunders, which had contributed to an economic downturn well before the Syrian crisis began. “Every time we have refugees, Jordan tries to make the best out of it,” says Yusuf Mansour, a Jordanian economist. “We did that with the Iraqis before and we’re doing it with the Syrians.”

Such critics note that refugees from the current crisis have brought with them over 500 new companies—and the accompanying jobs. Meanwhile, the Jordanian Investment Board reported over $200 million of Syrian investment in 2012 and the first half of 2013, compared to just $3 million in 2011. Mansour adds that an increase in tax revenue has complemented this investment: “One third of government revenues come from the sales tax. So when the population increases by, say, 10 percent, the government makes more money.”

Moreover, Jordanians themselves often express skepticism regarding the notion that Syrians are stealing jobs from Jordanian citizens, noting that Syrians tend to occupy positions that Jordanians find undesirable. “Only 5 percent of the Jordanian labor force goes to menial jobs,” insists Mansour. “Jordanians like to go work for the government, or in white-collar jobs. They don’t like to take up menial, manual labor.Most likely, the Syrian refugees actually compete with Egyptian workers.”Official Jordanian statistics lend little, if any, support to the notion that Syrians have exacerbated unemployment—the average unemployment rate in 2013 was 12.6 percent, compared with 12.2 in 2012, and 12.9 in 2011.The unemployment rate of 11 percent in the fourth quarter of 2013 was the lowest for any single quarter in the past five years.

Regardless of these fundamental disagreements regarding refugees’ overall impact on the Jordanian economy—and the Jordanian government’s level of culpability for the country’s economic woes—it is undeniable that tensions are mounting between Syrian refugees and their host communities. The strains are particularly acute in poor, underdeveloped northern areas that have been hit hardest by refugee flows. “It happens that refugees are centered in areas such as Irbid and Mafraq where there is high poverty and unemployment,” says Mansour. “In many cases, refugee children in the [UN-funded] camps are getting better schooling than Jordanians. This creates a lot of jealousy.”

A June 2013 survey by the Center for Strategic Studies, a Jordanian think tank, reflected these tensions, finding that 73 percent of Jordanians opposed allowing more refugees into the country. That same summer, the Jordanian government clamped down on refugee flows, closing dozens of illegal border crossings and decreasing entries through the official ones. The move left thousands of Syrians trapped outside the Jordanian border, drawing condemnation from international rights groups. Jordan has admitted only 60,000 refugees in the six months since August 1, 2013; 330,000 have entered Lebanon during the same period, and 400,000 entered Jordan during the seven months before.

Washington thus faces a mounting imperative to help ease these pressures, both to preserve Jordan’s stability and, by extension, encourage the Kingdom to continue accepting Syrians fleeing the violence in their country. The Kingdom has long benefited from US assistance, having received $660 million annually in economic and military aid since 2008; the United States recently renewed this package, in addition to the promised $1 billion in loan guarantees and another $200 million in direct support committed in March of last year. It is critical, however, that Washington work with the Jordanian government—which has a history of economic mismanagement—to ensure that this money is used effectively to alleviate the strains in affected areas. It should also join organizations like Human Rights Watch in calling on the monarchy to keep Jordan’s northern border open.

Ultimately, however, there is a limit to the number of refugees that a resource-strapped country of seven million can possibly host. As Syria’s civil war stretches on, a viable policy toward the refugee crisis will require a loosening of the draconian resettlement standards in the United States and other Western states (as of last September, ninetyof Syria’s more than two million refugees had been resettled in the United States). Regardless of its status as the greatest single donor to humanitarian efforts in and around Syrian, Washington cannot plausibly claim to be doing its best to support Syria’s displacedwhile the number of refugees resettled on US soil continues to be counted in the dozens.