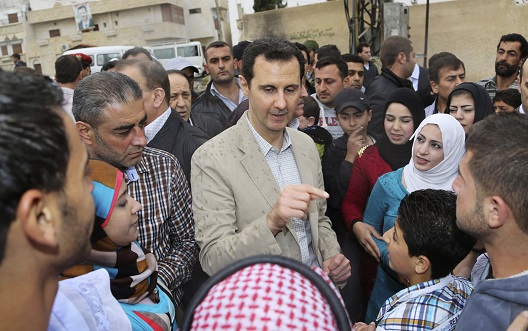 Bashar al-Assad recently announced that his regime is holding an “election” in Syria on June 3. The Syrian Opposition Coalition has responded that this latest move by the regime represents a clear decision by Assad to once and for all forgo any illusion that he is willing to pursue a political solution to the conflict. His attempts to portray his rule as inevitable, however, can only succeed if international partners to Syria’s rebels believe this farcical process changes any facts on the ground. The rebels stand strong against the regime’s killing machine. The question remains: will anyone help?

Monzer Akbik, a senior Coalition official referred to Assad’s announcement as a “state of separation from reality, a state of denial. He didn’t have any legitimacy before this theatrical election and he will not after.” Nonetheless, taking a cue from his North Korean allies, Assad is retreating further into the insular hermit kingdom he has established for himself and his ruling clique while attempting to don a façade of legitimacy.

In early April, the core group of the Friends of the Syria—including Egypt, France, Germany, Italy, Jordan, Qatar, Saudi Arabia, Turkey, the United Arab Emirates, the United Kingdom, and the United States—roundly condemned Assad’s upcoming elections as a “parody of democracy” and declared that holding them “would reveal the regime’s rejection of the basis of the Geneva talks.”

Sadly, the international community has been eloquent in condemnation but impotent in follow-through. Another strongly worded condemnation will not force the regime to the negotiating table. Nor would it stop the regime’s tanks and Iranian backed militias from completing their attempted encirclement of Allepo city, and its remaining 2 million inhabitants—paving the way for another starvation siege on an unprecedented scale.

Indeed, a strong correlation can be made between the lack of robust response to the regime’s flagrant flaunting of international norms and the its brazen continued use of chemical weapons (on at least three separate occasions since the August 21 mass chemical strike).

It is now incumbent upon the Friends of Syria to ask the difficult question: “What next?”

Lessons in state craft can be gleaned from Iran’s strategy in Syria. In 2012, when world leaders actively referred to Assad’s days as being numbered, and when then-Secretary of State Hillary Clinton described Assad as a “dead man walking,” Tehran’s strategic calculus remained steadfast as Iranian Revolutionary Guard Qods Force leaders made the fateful decision to double down on their erstwhile ally.

At the time, Qods Force Commander Qasem Soleimani reportedly told Iraqi politicians that, “We’re not like the Americans. We don’t abandon our friends.” Despite the daunting order of the task at a time when the regime’s forces were steadily crumbling and Iran still reeling from sanctions and economic mismanagement, there were no policy discussions in Tehran on the “limits of Iranian power.” Tehran stood by its ally then, and now the West must take a comparative stand in bolstering their natural allies in the moderate Syrian opposition.

The regime’s Hezbollah allies have also attempted to project an aura of inevitably around Assad’s longevity, as reflected in a seemingly newfound confidence in Assad when Hassan Nasrallah and his deputy called upon the West to accept Assad as a reality. The Russians have also followed suit.

The real pillars for Assad’s support come from Iran, Russia, and the internationally designated terrorist group Hezbollah, not from the Syrian people.

The revolution is not being fought between morally equivalent adversaries with comparable military strength. Despite the vast disparity in resources (with the regime receiving hundreds of tons of military supplies from Iran and Russia on a monthly basis), the Free Syrian Army continues to make impressive gains against all odds.

The balance of power on the ground ebbs and flows, and the assessment by US government agencies that additional US military aid would not have a material impact is fundamentally incorrect. Rebel forces have proven their bona fides, in a matter of weeks pushed al-Qaeda out of multiple strongholds and strategic crossings in the north while fighting the regime simultaneously. Though the regime gains ground, the attrition rate it suffers in both material and men has made the economic cost of such advances prohibitively high.

Members of Assad’s Alawite sect have borne the brunt of the regime’s folly. Villages and towns in regime strongholds on the coast have contributed a disproportionate high number of their sons to fight for Assad’s militias far from their homes. One local from Latakia captured an increasingly prevailing mood, telling Reuters, “We thought that we were somewhat invincible, as if the rebels would never reach us. But that’s not true.” Below the surface, the regime is much more vulnerable than many realize.

The regime’s attempts to shape international opinion and force Western governments to accept—if not duly recognize—Assad’s diktat is founded on the belief that the international community can be lulled into accepting a modus vivendi with the regime based on ostensible mutual interests in fighting terrorism. The regime has even gone so far as to attempt to paint an image of normalcy and calm in the parts of the country still under its control.

But beyond the attempt to project authority and control through a Potemkin Village on display to the world via elections, Assad perpetrates an institutionalized war on civilians—a classic sign of weakness among strongmen who resort to razing land which they cannot hold.

Meanwhile, the opposition has designed an internationally accepted blueprint to end the violence and restore security. The Syrian Opposition Coalition has a cabinet in waiting to govern temporarily as a constitution is written and plans for a true democratic election can be carried out. Elements of existing governmental institutions would be coopted and reformed, and those with no blood on their hands will continue day-to-day operations necessary to rebuild and run the country.

The Syrian Opposition Coalition has established interim Syrian ministries based across the border in Gaziantep, Turkey, while the Free Syrian Army forces and the Syrian Revolutionary Front liberate and hold contiguous territory. In Syria, the opposition is establishing governance on the ground through a network of local councils, which are grassroots self-government bodies within Syria that are helping establish a resurgent civil society after decades of Assad family rule that destroyed any organization it couldn’t control.

The blueprint is there, the Syrian opposition is ready—ironically, it is now the West that seems to have no plan on how to move the transition forward in Syria. The moribund Geneva process can be redeemed ironically enough on the battlefield—by demonstrating to Assad that impunity not only has a price, but that the cost is not manageable. The death knell of the Geneva political process and the regime’s obstinacy must prove to be a trigger point for the US and its allies. As the lives and aspirations of the Syrian people are at stake, so too is the credibility of the international system.

Oubai Shahbandar is a senior advisor to the Syrian Opposition Coalition in Washington D.C.

Image: Syrian President Bashar al-Assad (C) chats with people during his visit to Ein al-Tinah village, northeast of Damascus April 20, 2014, in this handout photograph released by Syria's national news agency SANA. Apart from Ein al-Tinah, Assad on Sunday also visited the nearby ancient Christian town of Maaloula, which was recaptured from rebels last week. Some have debated the authenticity of these photos, arguing that they had been taken at an earlier date. (Photo: REUTERS/SANA/Handout)