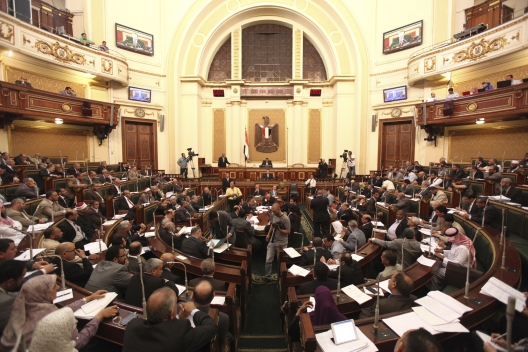 Earlier this week Egyptian President Abdel Fattah al-Sisi approved a law to govern the upcoming parliamentary elections, presently scheduled to occur “before the end of March 2015.” The law creates an electoral system which is overly complex, marginalizes political parties, and allows for easy government manipulation.

In accordance with Article 102 of the Egyptian Constitution, the law calls for the House of Representatives to include 567 members: 120 members chosen from closed party lists, 420 individuals elected by geographic districts, and 27 member appointed by the president. Each elected official will serve a 5-year term.

Regarding the 120 seats chosen from closed party lists, Egypt will be divided into four large geographic regions. Each party will have a separate list with candidates from each region. The final 120 members must include at least 24 Christians, 21 females, 8 Egyptians living abroad, and 8 handicapped persons. Regarding the 420 individuals, they will be elected as independents from 237 electoral districts. Of those districts, 83 will elect a single representative, 123 will elect two, and 30 will elect three representatives. Presidential spokesperson Alaa Youssef stated that each elected member would “represent equal segments of the electorate.”

This electoral system, like others of Egypt’s past, is complicated. The presence of a parallel voting system, similar to that of the 2012 constitution, is not by itself overly complicated. It is used in countries such as Japan and the Philippines. But a parallel voting system which includes new electoral districts of variable district magnitudes (the number of representatives elected in a given district) and four regional party lists is a lot to digest for any political community, especially one which has seen several new constitutions and heads of state within the past four years. The political process, for voters and parties, of learning the incentives of new electoral structure will be gradual, and will be based more on experiences from previous elections than detailed analyses of the current law.

The benefits of the system’s complication, however, are not sufficient. Regarding district magnitude, only 30 districts will elect three candidates and 80 will elect only one, with the majority electing just two. These variations in district magnitude could have different effects on strategic voting, how centrist or extreme the elected representatives are, and to what extent elected officials deviate from the desires of voters. While each elected official will represent about 131,000 voters, Egyptians in different electoral districts will be asked to vote and think in different ways. As such, Egyptian in districts which are physically much smaller in cities like Cairo and Alexandria will vote differently than Egyptians in physically larger districts in the desert and in Upper Egypt. Generally, the simultaneous use of a majoritarian system in parallel with a proportional system is motivated by the desire to mitigate the drawbacks of each. However, it is unclear if this goal is actually achieved in practice.

The marginalization of the political influence of parties by restricting them from participating in the majoritarian contests could be one such goal. Only 120 of 567 members of the legislature are allowed to carry the banner of a party. Even if all 120 proportionally-allotted seats were won by a single party, no governing legislative majority would be possible in order to present a unified voice to challenge the political power of the presidency. This was likely a desired result of those who crafted the electoral law: parties are given far fewer seats than they were during the late-2011 through early-2012 legislative elections which were dominated by the Muslim Brotherhood. The past electoral strength of Muslim Brotherhood has likely turned the present government sour to political parties, thus leading to a conscious decision to marginalize their potential strength within electoral politics. Nonetheless, the Conference Party supports the law, and the Wafd Party, the Reform and ‎Development Party, Egyptian Front, and Democratic Alliance will participate in the election, with many expressing criticism of the law. Both the Egyptian Social Democratic Party and al Dostour Party have opposed the law.

A related, though distinct, decision which strengthens the present government’s hand is the prevalence of geographically-based representatives. Farid Zahran of the Egyptian Social Democratic Party expressed concern the government might gerrymander, engaging in the splintering and packing of opposition-heavy geographic areas. Zahran is right to be concerned: the drawing of electoral districts by a unitary, partisan body is the easiest way to manipulate the results of an election while maintaining the veil of legitimacy. Moreover, these elections are particularly important as the first parliamentary plebiscite under the 2014 constitution, as they will set the precedent of electoral behavior in all future elections.

This law creates the need for both voters and parties to perform complex political calculus, nearly eliminates the ability for any party to form a legislative coalition, and gives the government an unchecked ability to draw electoral lines. In the context of a strong executive as both enshrined in the 2014 constitution and as seen in practice, this law assures that Egypt’s legislature will be too dysfunctional and manipulable to act as a legitimate check on executive power.

Image: Photo: A general view of the session of the upper house of the parliament in Cairo June 10, 2013. (Reuters/Mohamed Abd El Ghany)