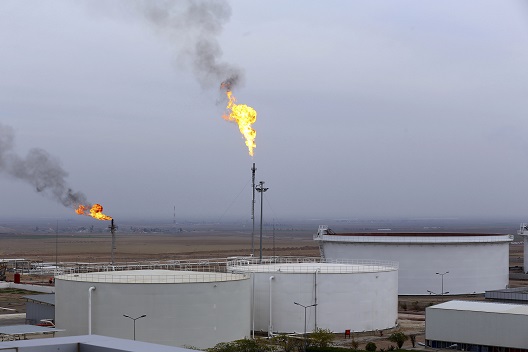 Both Iran and the United States have been pushing Iraq and the KRG to normalize their relationship, but Baghdad’s maximalist approach means the KRG is likely to hold out until after the May 2018 elections to make a deal.

Baghdad is demanding the return of Khurmala oil field from the Kurdistan Regional Government, and is seeking to cut deals with international oil companies operating in the region in a bid to restore Baghdad’s authority over the region’s oil industry.

The Kurdistan Regional Government has been at loggerheads with Baghdad since the dramatic military reversal that saw Baghdad reasserting control over disputed territories—and critical oilfields—following the KRG’s ill-fated independence referendum.

After months of limited contact, based on a decision to play hardball with the Kurds to press Baghdad’s advantage, Iraqi Prime Minister Haider al-Abadi has succumbed to international pressure and finally met with KRG Prime Minister Nechirvan Barzani. In fact, the pair have met twice in the last two weeks, once in Baghdad, and once on the sidelines of the World Economic Forum in Davos. In a policy convergence that is strangely common in Iraq, both Iran and the US had been pushing for the meeting to take place.

In an interview with the author, Iraqi Oil Minister Jabar al-Luaibi, who was part of some of the Iraq-KRG bilateral meetings in Davos, said that the two sides had agreed on “seventy percent of outstanding issues,” but said that the main outstanding issue in negotiations was control of the Khurmala oil field.

The Khurmala oil field, which is situated northwest of the disputed city of Kirkuk, produces some 110,000 barrels of oil a day and is operated by KAR Group. Although Baghdad took control of the city of Kirkuk, and the nearby Havana and Bay Hasan oilfields, in a military offensive in October 2017, it did not take Khurmala—which the KRG claims is within its core territory. Baghdad insists that Khurmala, which was operated by the Iraqi North Oil Company until the KRG seized it and handed it to the Erbil-based KAR Group in July 2008, must be returned to federal government control.

When KAR group refused to hand over Khurmala to the federal government, the Iraqi parliament responded by banning the company from operating in Kirkuk’s oilfields, and authorized the government to take over production.

Baghdad is also seeking to reach agreements with international oil companies operating in the Kurdish region, who have financial agreements that the KRG may not be able to honour. Rosneft, which is majority owned by the Russian government, reportedly paid one billion USD in advance for oil produced by the KRG in February 2017. The oil giant doubled down on its investment in Kurdistan even after the independence referendum, signing a deal to develop five blocks in the region in October.

Oil Minister Luaibi urged Rosneft to make contact with Baghdad, saying there were many possible ways in which Baghdad could reach an agreement with the company. Although Luaibi is due to visit Russia in March, he said Rosneft should come to Baghdad to meet before then. “Rosneft is important because it owns 60% of the Kirkuk-Ceyhan pipeline, and we want to use this pipeline” the oil minister said. Luaibi was open to the possibility of Rosneft cooperation in Kirkuk oil fields, where Baghdad has recently contracted BP to help boost production capacity. BP has an almost 20% stake in Rosneft, which potentially eases the path to collaboration.

With little leverage over Baghdad, the KRG is worried about the possibility of Baghdad striking deals with oil majors over their heads. But with parliamentary elections due in May 2018, all is not lost, as the Kurds may have the opportunity to play king-maker, extracting demands in return for joining a governing coalition. With the elections in sight, the Kurds are unlikely to accede to Baghdad’s demands on Khurmala, and will seek to persuade oil majors to hold off making any big decisions. The political landscape entering the elections is fractured, with Iraqi Shia, Sunnis, and Kurds all running multiple lists. There are many possible coalitions that could form after the elections, but Kurdish participation could be key to giving one Shia leader the edge over another. This scenario will only benefit the KRG, however, if Kurdish parties work together to strengthen their bargaining power. At the moment, Kurdish political parties are locked in mutual recriminations over where the responsibility lies for the fiasco of the independence referendum, which led to the Kurds losing a third of the territory and half of the oil that they once controlled. But, if the prize is big enough, the parties may coalesce once again to make the best possible deal with Baghdad.

Dr. Nussaibah Younis is an Associate Fellow at Chatham House and a Senior Adviser at the European Institute of Peace. Follow her on Twitter @nussaibah.

Image: A view is seen of Khurmala oilfield on the outskirts of the city of Arbil in Iraq's Kurdistan region December 4, 2013. REUTERS/Stringer