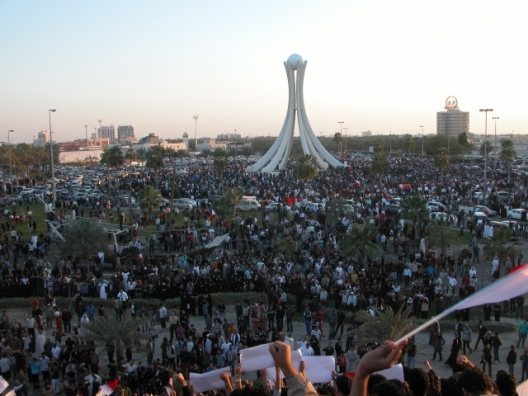 The popular movement to overthrow the Mubarak government in Egypt in 2011 served as motivation for a political uprising in Bahrain. Now, after two and a half years of political unrest and social polarization, another Egypt-inspired campaign—Bahrain’s “Tamarod” (Rebellion)—has unwittingly facilitated the expansion of security measures that threaten to curtail the activities of Bahrain’s main opposition movement, al-Wefaq, as well as those of the influential Shia cleric Sheikh Isa Qassim. This new turn jeopardizes the political engagement needed to stem the distressing rise in crude bomb attacks, exacerbates an already bleak human rights landscape, and threatens to intensify the region-wide growth in sectarian conflict.

The context for the “rebellion”

On July 4, a day after the Tamarod campaign in Egypt prompted a military overthrow of the elected Muslim Brotherhood government in Egypt, a Facebook page was created calling for a Tamarod rebellion in Bahrain. The site accused the ruling Al Khalifa of “undermin(ing) the people’s decisions and sovereignty in favor of their own personal interests,” and set a date of August 14 for protests to achieve self-determination in an independent and democratic state. The site called for peaceful acts of civil resistance including closing shops, boycotting commercial and financial activities, turning out lights after sunset and proclaiming “Allahu Akbar” from rooftops, as well as other actions to be planned in a decentralized fashion.

The desire to capitalize on the June 30 actions in Egypt emerged from the difficult straits in which the opposition found itself. Bahrain’s February 14, 2011 uprising, the ensuing crackdown, and the state campaign to discredit the opposition left the country badly divided along sectarian lines. The political initiatives that followed—the acceptance of the Bahrain Independent Commission of Inquiry (BICI), the initiation of a National Dialogue—did little to heal these divisions and even less to achieve the opposition goals of substantial political reform. A new round of National Dialogue talks begun in February 2013 with the participation of the legal opposition societies was mired in fundamental disagreements about its mechanism and purpose.

Intense security measures by the government largely succeeded in confining political unrest to Shia villages. Many witnessed nightly battles for control as rebellious youth attempting to blockade the entrance of their village to security forces clashed with police. The dearth of political advancement and the siege environment in the villages was thwarting national outreach, encouraging fragmentation, and increasingly, breeding militancy. Tamarod Bahrain, then, was an attempt to reinvigorate the opposition campaign and to surmount these obstacles.

Yet rather than overcome the political fragmentation and worsening security environment, Tamarod Bahrain fell prey to them. In July 2013, Bahrain experienced a rash of crude bomb attacks on police patrols in Shia villages. In a clear escalation, on July 17 a booby-trapped car exploded in a mosque parking lot in Riffa, the traditional seat of power of the ruling Al Khalifa. The following day the government banned political rallies including a pre-August 14 action that was planned by the Tamarod campaign. Demands for a wider crackdown prevailed.

At the behest of the King, the Council of Deputies and Shura Council met in an extraordinary joint session on July 28 to discuss toughening penalties to the 2006 terrorism law. This National Council—devoid of representatives of the legal opposition due to their resignation in protest of the crackdown in March 2011 and their subsequent boycott of parliamentary by elections—called for broad measures to curtail rights and to empower the government to act in the interests of security. The council went so far as to welcome as necessary the reinstatement of a new State of National Safety akin to the Emergency Law put in place after the initial February 2011 uprising.

The King subsequently issued decrees invoking new powers and imposing new penalties in line with the National Council’s summarily issued recommendations. These included tougher punishment for “terror instigators,” among them the revocation of citizenship. Another royal decree amended the law on public gatherings to ban all protests, rallies, and sit-ins in the capital, Manama. Other amendments tightened regulations on social and charitable donations and penalized guardians for the participation of children in protests.

In advance of the August 14 protests, security forces expanded arrests and detentions of activists including a well-known blogger, Mohammed Hassan. The day before the protests Prime Minister Khalifa Bin Salman Al Khalifa issued a sternly worded statement that no protests would be tolerated and that anyone inciting them would be prosecuted. Preemptive security measures were taken, including deploying armored personnel carriers to Shia villages and barricading them with barbed wire.

The extraordinary security measures impeded joint action by the opposition, and the protests that took place on August 14 were confined to multiple small actions in villages. Coordination was likewise hindered by the multiplicity of factions and directives, and by the decision of al-Wefaq to affirm the right to peaceful action, but not formally participate in the Tamarod protests. Nonetheless, the intensified security environment in the country extended past August 14 and beyond the limited reach of Tamarod Bahrain.

While Bahrain political activists failed to appreciate the imperfect parallel of Egypt’s situation with that in Bahrain, the Bahrain government now embraced the new regional security environment heralded by the dark turn of events in Egypt. New directives issued and actions taken in the past few weeks have entangled Bahrain’s opposition in the campaign against terrorism.

The Ministry of Justice and Islamic Affairs banned political societies from meeting foreign diplomats, government representatives, or foreign organizations without prior coordination with the Ministry of Foreign Affairs on September 4. Less than two weeks later, the government arrested Khalil al-Marzouq, al-Wefaq’s Political Director and the primary intermediary between Secretary General Sheikh Ali Salman and Western governments. Al-Marzouq was known to consistently advocate the American position on political participation and engagement with the government. His arrest on charges of “incitement of terrorist crimes,” allegedly due to a speech in which he was passed the flag of the February 14 coalition, indicates a new willingness of the government to target political moderates in a new expansive campaign against terrorism.

The same Ministry of Justice and Islamic Affairs also submitted a lawsuit to disband the Islamic Scholars Council and seize its assets. The council was formed in 2004 by Bahrain’s most influential Shia scholar, Sheikh Isa Qassim, who is close to the political leadership of al-Wefaq. While Sheikh Qassim no longer heads the council, it still is bears his association and commands respect. The fact that the government is also pursuing the deportation of Bahrain’s second Faqih who represents Ayatollah Sistani in Bahrain, Sheikh Hussein Najati, has only intensified the sense that the Shia religious community is under attack.

The danger of escalating sectarianism

The reaction of the United States to the recent rash of new government security measures has been episodic and muted. Statements have been consistent with the standing position that freedom of expression should be protected, violence should be condemned, and all parties should participate in national dialogue to reach a national consensus. Thus when the unified opposition chose to suspend its participation in the National Dialogue talks following the arrest of Khalil al-Marzouq, this drew an American rebuke. However, this reactive policy may not be sufficient to address the significant shift that appears to be taking place in Bahrain’s political landscape, where the very standing of the political opposition appears to be under threat.

There are some factions within the Bahrain leadership who advocate the elimination of Shia from positions of influence. The Tamarod campaign and the tenuous link that has been drawn between it and the rash of crude bombings have provided a favorable environment for an expansion of the campaign against terrorism and political sectarianism. As in Egypt, there is a temptation to push this advantage to eliminate the Islamist party and “eradicate” political Shiism.

Yet, in the context of Bahrain where Shia parties arose to protect a disadvantaged community, most Shia will perceive such a campaign as an attack on them all. It will not achieve the national unity the government claims to seek.  Rather, it will exacerbate the sectarian divide which President Barack Obama mentioned in his speech at the United Nations as being of growing concern to the United States. Policymakers should not lose sight of this broader context in navigating the changing security and political environment in Bahrain.

Kristin Diwan is an Assistant Professor in Comparative and Regional Studies at the American University School of International Service. She works in both comparative politics and international relations, specializing in Arab and Islamist politics.

Image: Protesters gathering at the Pearl roundabout at the start of the Bahraini uprising in February 2011. (Photo: Wikimedia Commons)