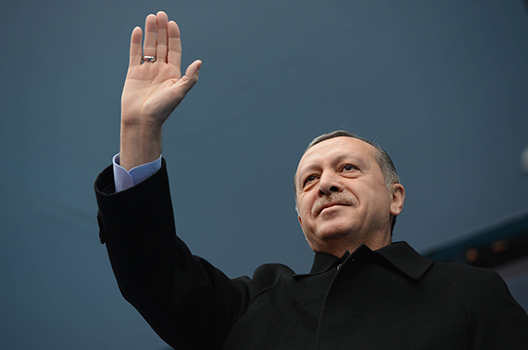 Turkey’s Iraq policy changed considerably in the past half-decade. Turkey has implicitly broken with its “one Iraq” policy and, since 2010, has taken steps to deepen alliances with political actors, committed to the further decentralization—and, in the longer term, break-up—of the Iraqi state. This policy is a sharp departure from Turkey’s history of advocacy for a strong, centralized Iraqi state, without an independent and strong Kurdish region.

Turkey’s implicit advocacy for the further decentralization of the Iraqi state, is demonstrated by alliances with the former governor of Ninewa, Atheel al-Nujaifi, and his brother, Osama. These two men are also close to the President of the Kurdistan Regional Government (KRG), Massoud Barzani, who heads the Kurdistan Democratic Party (KDP) in the Kurdistan region of Iraq. The Nujaifis are working with Turkey to train an independent militia with the immediate goal of participating in the fighting against ISIS, but which may also be used to advance their long-standing proposal to create a federal region in Ninewa, similar to that of the KRG. Turkey’s support for this policy, combined with its relationship with Barzani—who is currently pushing for a referendum on Kurdish independence—has prompted Iraqi politicians to claim Ankara is working to break-up the state.

This narrative, in turn, has helped empower Iraqi nationalist elements from across the political spectrum, including much of the Sunni-majority parties who, for a number of reasons, feel the need to work closely with the Iraqi central government, according to Inside Iraqi Politics.

Turkey’s shift in policy began in 2010, shortly after former prime minister Nuri al-Maliki’s return to power, despite his party winning fewer votes than its main rival at the time, the Sunni majority Iraqiya coalition. Turkey cultivated close ties with Iraqiya leader Tariq al-Hashimi and lent support to the coalition from its inception in 2009. Hashimi fled Iraq in 2012 and now lives in exile, after receiving a death sentence in a politically motivated trial. Iraqiya subsequently fractured. Turkey’s shift in policy is at odds with current US goals to strengthen the Iraqi military and entrench a modicum of political stability in Baghdad, as part of the “day after ISIS” planning for the forthcoming Mosul operation.

This shift in policy is further complicated by a recent controversy over Turkish troops in Northern Iraq. As recently as the beginning of October, the United States indicated that all military operations in Iraq must be conducted with the full consent of the Iraqi government. Ankara, on the other hand, has ignored Iraqi Prime Minister Haider al-Abadi’s calls on the Turkish military to withdraw from a firebase near the town of Bashiqa. First established in early 2015, it is here that the Turkish government is training the contingent of local fighters with the Nujaifis. Dubbed the Hashd al-Watani, the militia is active in territory under KRG control and under an agreement Ankara concluded with Barzani.

Despite Turkish training, the Hashd al-Watani is a weak, poorly armed force that cannot be counted on to do any serious fighting against the Islamic State. The group reportedly has some 4,500 members, but has little access to weapons, and is poorly organized. The forces could be called upon to play a role in holding post-Islamic State Mosul, once ISIS is cleared from the city, but any such decision would probably require political sign-off in Baghdad, something that does not currently seem feasible. For these reasons, both Turkey and Hashd al-Watani are not expected to play a direct role in the forthcoming battle for Mosul, as part of the formal, anti ISIS-coalition, although these actors could choose to act independent of the coalition.

Turkey spearheaded efforts to deepen the Nujaifi-Barazani alliance and, in Ninewa, used its close relations with both actors to circumvent the Iraqi central government, first to reach an agreement about the Bashiqa base, and then to augment forces deployed in early December 2015. Prime Minister Haider al-Abadi has made this deployment an issue, openly criticizing Ankara’s decision-making, for two reasons: First, the deployment is a violation of Iraqi sovereignty. Second, his political opponents have used the base to attack him, in preparation for forthcoming elections. The anti-Abadi factions are, for the most part, sympathetic to Iranian-backed individuals in Iraq, the most prominent of which is former Prime Minister, Nuri al-Maliki.

The United States has sought to mediate the conflict, both to ease tensions before Mosul and, contrary to the narrative in Turkey, to try to mitigate Iranian-backed actors in Baghdad. The US appears to have had some success in reducing the numbers of Turkish soldiers deployed. However, to date, between 600 and 1,000 soldiers remain and artillery and tanks at the base routinely fire on Islamic State (ISIS) positions, either in support of KDP Peshmerga, Hashd al-Watani units, or to protect the base from ISIS rocket attacks.

The Bashiqa issue has also increased populist support for anti-Turkey militias—Hashd al-Sha’abi, or Popular Mobilization Front (PMF)—of which many have links to Iran. Turkey has expressed concerns about Iranian-allied PMF playing a role in the Mosul operation. The United States shares this concern but has sought to integrate all forces involved in the forthcoming operation into the Iraqi military’s chain of command. To “hold” the city, the United States has indicated that it will rely on local volunteers from Mosul, reportedly trained as part of anti-ISIS coalition.

This effort will move in parallel with the empowerment of the local council and current governor Nofal Agoob, now in exile, will be tasked with administering the city with central government support. This plan is at odds with Turkish support for Nujaifi and, again, is another potential fault line that has to be navigated in post-Islamic State Mosul. The risk is also that Iran-allied PMF could use the Bashiqa base as a justification to take a more pronounced role in the operation, risking broader sectarian tensions.

As the leader of the anti-ISIS coalition, the United States can account for the disparate interests of its various coalition partners. The Turkish role in northern Iraq is destabilizing in this regard and could empower the actors Ankara is trying to sideline: Maliki and Iranian-allied militias. In doing so, the policy Turkey is implementing is leading to the outcome it is intended to stop: the further empowerment of Iran in Iraqi politics.  Regardless, Turkish actions suggest an implicit end to its one Iraq policy, a change that will have a short-term impact on military action in Mosul, and longer term implications for a range of issues, like Kurdish independence or post-ISIS stabilization efforts in Ninewa.