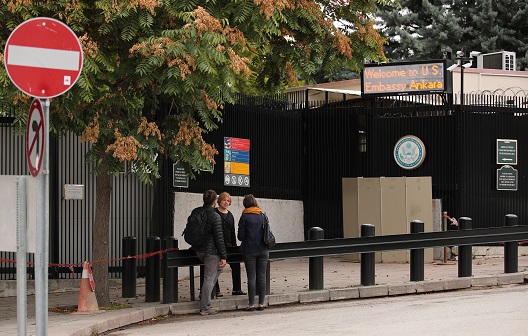 People wait in front of the visa application office entrance of the U.S. Embassy in Ankara, Turkey, October 9, 2017. REUTERS/Umit Bektas

On Sunday, the Trump Administration suspended non-immigrant visas for Turkish citizens. Students, patients seeking American medical treatment, tourists, and business travelers from Turkey will be denied entry until further notice. A previous argument indicated that US President Donald Trump is closing America’s doors to the world—be it with travel bans for mostly Muslim-majority countries, a historically low refugee cap, or ending protections on undocumented young immigrants. The latest move, though, targets a key NATO ally and partner in the fight against terrorism, and undermines an already tense relationship.

On Monday, US Ambassador to Turkey John Bass confirmed that this action was taken in response to Turkey’s arrest last week of a Turkish citizen employed by the US Consulate in Istanbul, adding that this was the second arrest of this nature. The local hire was detained for alleged ties to the Gülen movement, which the Turkish government claims is behind the failed military coup of 2016. Following the State Department’s notification, Turkey’s Ministry of Foreign Affairs issued a suspension in kind on non-immigrant visas for US citizens. Though such an act might seem extreme between two allies, it is not unusual for diplomatic reciprocity, and US-Turkey relations have been struggling for years now.

The State Department stated it will “reassess the commitment of the Government of Turkey to the security of US Mission facilities and personnel.”

‘Commitment’ is an uncanny term to use with a NATO ally that hosts the US Air Force at the Incirlik Air Base near Adana and plays a pivotal role in the fight against the Islamic State (ISIS, ISIL, Daesh) and al-Qaeda in Syria. It is particularly strong language given the history between the two countries: three Turkish police officers were killed while defending against a 2008 assault on the old US Consulate in Istanbul, and a Turkish security guard was killed in a 2013 suicide bombing at the US Embassy in Ankara.

The irony of the ‘commitment’ line is not lost on observers in the region. President Trump inherited a portfolio that suffered under his predecessor. The current low point in US-Turkey relations is the result of a seven year slide following former President Barack Obama’s Syria policy, particularly his focus on ISIS and tepid support for the anti-Assad opposition, which opened Turkey’s southern flank to a myriad of destabilizing forces, including ISIS and the strengthening of the Kurds in northern Syria—the latter which Turkey sees as an existential threat. Turkey—hosting the largest number of Syrian refugees—is also the frontline for today’s global refugee crisis, for which the Syrian government and its main backers (Russia, Iran, and Hezbollah) are the main drivers. By focusing on ISIS, using the Kurds as the main proxy force against ISIS, and taking a comparatively low share of Syrian refugees, the United States has been unresponsive to Turkey’s need, making it feel isolated.

The Syrian war and refugee crisis have played a significant role in disrupting Turkey’s internal affairs, which erupted violently with the failed 2016 coup. President Obama’s tepid response to the coup attempt drew many questions from allies and foes about the United States’ commitment to NATO allies and fellow democratically elected governments.

Turkey and the United States have enjoyed strong relations in the past, particularly since the end of the Second World War. Turkey was a frontline of the Cold War, joining NATO in 1952. Despite upsets, Turkey’s strategic importance to the United States has always kept relations strong. The US has multiple military installations in Turkey, and Turkey has been a key military partner in the region, supporting a no-fly zone in northern Iraq in 1991, for instance, as well as aiding the global fight against extremism following the September 11, 2001 attacks. A Muslim-majority country, Turkey stands out in the region as a modern, developed, democratic society embracing faith and tradition. Turkey is also the US’s fifth largest trading partner, and there are over 1,700 American companies with investments in Turkey. The past years’ disagreements, culminating in the visa war, shows a short-term change in US priorities—defeating ISIS—having long term costs. Turkey’s recent purchase of Russian S-400 anti-defense system has been viewed as another knock in a cooling relationship.

In the immediate term, the United States has the most to lose in this face-off. While this recent development will further isolate Turkey from a media standpoint, the United States will continue to accrue bruises on its credibility in the international community. Trump’s general isolationist stance and undiplomatic approach to international relations, coupled with his cutting of support to the anti-Assad opposition and ramping up the support for anti-ISIS forces, will only further aggravate the situation on the ground.

The visa suspension alienates a key market from the United States’ soft power assets and business community. Trump’s decision aggravates a friendly Muslim-majority population, a cost the United States cannot afford in its engagement with the global Muslim community. Above all, this scuffle dampens focus on shared security and political interests in the region. In the long term, to continue the fight against ISIS and al-Qaeda, and to work towards a sustainable solution to the Syrian crisis, the United States will have to remedy ties with Turkey.

Adham Sahloul is a program assistant at the Rafik Hariri Center for the Middle East.