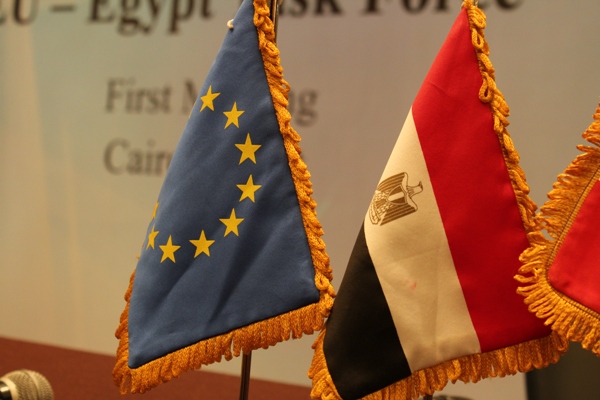 Europe offers Egypt €5 billion of loans and grants to mark the end of its 20-month-long wait and see approach to the North African country, but fundamental changes in policy beyond finances are yet to materialize.

On  November 14, the European Union High Representative Catherine Ashton announced a package of staggered grants and loans to “support Egypt through its political transition and economic development.”

In addition to the €449-million-commitment to Egypt under the 2011-2013 action plan, the EU will pump about €800 million into the country over the next two years, €303 million of which will be in the form of grants. The European Investment Bank and the European Bank for Reconstruction and Development have each pledged to offer €1 billion in loans annually for two years.

The package was announced following the two-day EU-Egypt Task Force in Cairo, which was described as the biggest ever meeting in the history of Egypt-European relations. It included business delegations, MPs and officials from both sides of the Mediterranean, signaling a new era of cooperation across different fields.

The Task Force, which culminated in a press conference delayed for over an hour as officials were still ironing out the details, marked the end of stagnant relations that suffered during an elongated and bumpy transition in Egypt and a contagious financial crisis and unrest in Europe. Flowery EU statements about major policy shifts in the wake of the so called Arab Spring quickly fizzled into no tangible action as uncertainty continued to cloud Egypt’s political future, weathering military rule and repeated cabinet reshuffles.

Last May, European officials were hopeful that presidential elections would bring stability and long-term vision to the relations, but warned against expecting a “miracle.” Two months after taking office, President Mohamed Morsi visited Brussels and emphasized interest in strengthening relations with Egypt’s biggest trade partner. The already planned Task Force was announced as a brand new page of cooperation. Two weeks ago, Hannes Swoboda, the President of the Group of the Progressive Alliance of Socialists and Democrats in the European Parliament, told a group of Cairo reporters that there was a growing interest in ending the “wait and see” policy.

But between May 2011 and November 2012, Egyptian officials expressed frustration with the delay in promised funds that were desperately needed to aid Egypt’s plummeting economy. The emphasis on finances before, during and after the Task Force was strong.

This Wednesday, when I asked several European officials about their assessment of the Task Force, all answers featured numbers with triumphant smiles.

“We did not just come with promises, but with real commitments,” Ashton told reporters on Wednesday.

This week’s meetings also addressed trade, education, agriculture, transportation, mobility and migration, and science and technology. The agenda and the conclusion showed a will to foster cooperation in different fields, yet the political pretext stood out in the background.

The driving force behind fresh grants and the promised loans that would move cooperation forward was the change in political discourse. The protests that forced regime change in Egypt and elsewhere in the Arab World pushed the EU to review its foreign policies, gearing them more towards democracy and people’s needs. The May 2011 review introduced new terminology and sets of measuring tools and benchmarks grounded in the concept of “mutual accountability”. The aim was to keep the integrity and the motives of the cooperation in check and to avoid the embarrassing accusation many world leaders faced that they supported authoritarian regimes in pursuit of pseudo-stability.

The delay in negotiations and delivering funds was in fact due to lack of information on the political direction Egypt was taking. Debates about the ideological and conceptual principles that would guide the new chapter in south-north relations, and Egypt’s uncertainty about its potential benefit of the “mutual accountability” deal compounded the confusion.

Patricia Bauer, professor of political science at European Peace University, noted the challenge to get the European Neighborhood Policy to “support democracy as well as stability for Egypt at the same time.”

“In order to reach an – in any case limited – impact on the democratization process, the EU should substantiate the conditionality approach with principles of cooperation and link these to support instruments for the democratic transition,” she wrote in a paper as a visiting professor at Cairo University.

Bernardino Leon, EU Special representative to the Southern Mediterranean, told me last May that new tools have been created and that “there’s a clear shift from stability to democracy.”

For starters, some of the funds allocated to Egypt are directly linked to its commitment to reform.

“The SPRING money, this part of the resources are clearly conditioned to the democratic process,” Stefan Fule, the European Commissioner for Enlargement and European Neighborhood Policy, told me after the press conference on Wednesday in reference to a €90-million grant scheduled for 2012.

A representative constitution, commitment to protecting rights, and gender equality were mentioned in the meetings. Yet, there is no clear mechanism to asses this reform and what could be considered a setback in these areas or if other funds would be stalled as well.

Prior to the Task Force, 21 rights groups said their invitation to the meeting was withdrawn at the last minute. In Egypt’s parliamentary and presidential elections, no invitation was extended to the EU to monitor the vote. Fule said election monitoring isn’t a precursor to measuring commitment to democratic transition.

The lack of clarity about the assessment process at such a delicate stage — where the relationship is being redefined by both sides — opens the door to speculation about reverting to the pre-2011 phase of the relations.

This current phase is already laden with a new set of questions that citizens on either side of the Mediterranean are struggling to answer. The uprisings, the Occupy movement and the unrest in the north and south presented governments with numerous ideological challenges about governance, economy and citizenship. One such issue is the International Monetary Fund.

Part of the new funds promised to Egypt will be channeled with the IMF loan — a €50-million grant and €450 million in concessional loans. Opposition to the loan, the attached conditions and the spending process is already growing in Egypt. It mirrors similar voices critical of IMF plans for countries like Greece, where austerity measures led to violent protests.

Swobado, who had previously spoken against the IMF program for Greece, said the worries about the IMF packages are “an ongoing debate in Europe itself.” For Egypt, “we will insist thatit gives much more importance to social justice and education.”

Sarah Sirgany is a Cairo-based independent journalist. She contributes to Al-Akhbar in Lebanon and CNN among other regional and international publications and networks.