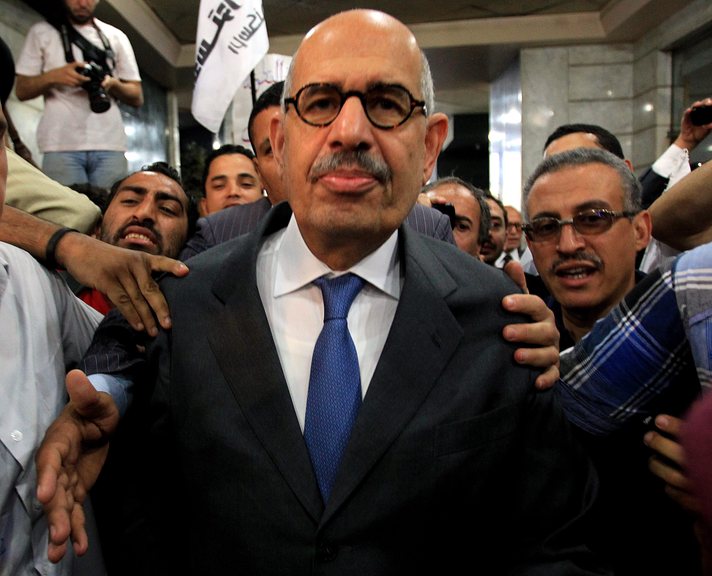 Despite his decision to withdraw from the presidential race, Mohamed ElBaradei still represents the values and aspirations of a generation of Egyptians seeking political change, dignity and justice. Before and during the revolution, ElBaradei was one of the few liberal opposition figures embraced by Egyptians as a viable alternative to the ruling regime. Thousands of youth joined ElBaradei’s campaign and gathered signatures for his 7-point petition for change, demonstrating an unprecedented level of political consciousness, despite the risks of engaging in activism against an authoritarian regime. The question now, is whether Mohamed ElBaradei and other leading liberals will be able to revitalize non-Islamist political forces by building organizations capable of competing successfully in the next parliamentary elections.

ElBaradei’s newly formed "Dostour" (Constitution) Party, if successful, could help strengthen liberal and non-Islamist political forces and facilitate their cooperation in future elections.  The new party, co-founded by ElBaradei, will have no difficulty attracting supporters in a political climate in which frustrated liberals and revolutionary forces are in need of leadership. Nevertheless, the party will need to confront three major challenges in order to succeed.

First, the party will need to clarify its ambiguous platform and ideology. During the press conference announcing the launch of the Dostour Party, ElBardei said the party’s agenda was to unite all Egyptians and provide an umbrella for revolutionary’ forces, enabling them to compete more effectively in future elections.

However, this platform has already come under criticism for its lack of specificity. Without a clear vision and concrete strategy, the party’s credibility will be in question. Furthermore, the party will have difficulty maintaining internal cohesion and unity, in the face of anticipated conflicts between members of different political and ideological affiliations. The Dostour Party seems to be following in the footsteps of other non-Islamist parties adopting “soft ideologies” rather than rigid platforms. This can be an effective strategy for unifying diverse supporters; however, there is a fine line between a “flexible” platform and an incoherent one.  The Dostour Party could fall victim to the latter if it does not succeed in refining its vague message.

The second challenge relates to the organization of the party. A large membership without sufficient organizational capacity could lead to the party’s disintegration. How will large numbers of new supporters be integrated into the new party? If new party members do not feel that their input is valued and that their talents are being utilized, their commitment to the party will be limited, and the potential for internal divisions and resentment will increase. This has been a problem for many post-revolutionary parties in Egypt, as party members have few opportunities to influence the leadership’s decisions, and are thus less motivated to adhere to high-level decisions that are made without their input.

The third challenge is related to the ability of the party to build grassroots support. Most of Egypt’s civil parties have been built from the top-down, meaning that they were conceived by elites and intellectuals as a means of effecting political change. Because these parties did not develop from the bottom-up, they lack the diverse, broad-based constituency that is needed to perform effectively in elections. However, the poor performance of civil parties in the parliamentary elections does not mean that support for civil values is lacking in Egyptian society, but that, until now, non-Islamist parties have failed to effectively penetrate grassroots networks to mobilize and build their constituencies. Whether or not the Dostour Party can leverage social networks to build a strong support base will determine its success or failure.

Despite these formidable challenges, the launch of the party presents at least two opportunities. First, it offers the youth a way to get involved again in the political arena, an important achievement at a time when many are feeling excluded from the political process despite their centrality in organizing the revolutionary protests last year. Second, the new party could inspire “civil forces” to unify and overcome their rivalries and fragmentation. The stakes of these opportunities are high: If the Dostour Party fails in its objectives, it could push non-Islamists who have already lost confidence in political parties to abandon the political process as a whole. Civil and liberal forces still have a chance to build effective political parties, but only if they can avoid repeating their past mistakes.

Nadine Abdalla is a Research Fellow at the Arab Forum for Alternative Studies (AFA) in Cairo and Ph.D. candidate at the Institute of Political Studies (IEP) in Grenoble, France. Her research interests include labor movements in the post-Mubarak era and democratic transitions in comparative perspective, with a focus on Egypt and Eastern Europe. She can be reached at [email protected]