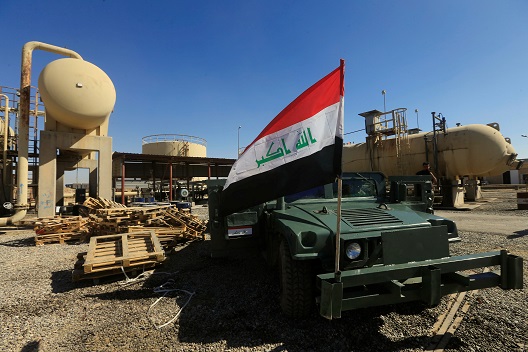 One of the main disputes behind tensions between the Iraqi federal government and Kurdistan Regional Government (KRG) includes disagreement over budget allocation. This month, the Iraqi government approved the proposed budget for 2018 and sent it to the parliament for debate in the coming weeks. The draft budget, strongly criticized by the KRG, is the latest episode in the contention between Baghdad’s vision of a strong center and KRG’s preference of strong regions. It also highlights a fundamental problem: the actual meaning of Iraqi federalism, which still lacks a clear institutional framework.

In the last five years, the KRG used economic policy to further its strategy of securing more autonomy from Iraq, even by increasing the region’s dependency on Turkey. The strategy worked so long as the KRG could expand its control over oil fields and widen its economic relations with foreign countries and companies, largely encouraged by high expectations over Kurdistan’s oil reserves and, since 2014, the sustainability of KRG’s control over Kirkuk’s oil fields. Now, by reclaiming those very oil fields, the federal government forces the KRG to choose between two difficult options: either continue relying on its shrinking and insufficient resources, or undo a great deal of its constitutionally dubious economic autonomy and accept more supervision and intervention from the federal government.

The proposed 2018 budget reduces the KRG’s share from 17 percent to 12.67 percent. KRG Prime Minister Nechirvan Barzani described it as the worst budget proposal, urging Baghdad to restore the previous share agreed upon with the Iraqi interim government in 2004. The disagreement began during former prime minister Nouri al-Maliki’s second term. Intertwined with the discord over managing oil resources and disputed territories, the budget clash was exacerbated by conflicting interpretations of the constitution regarding oil exports and revenue management. At the time, PM Haider al-Abadi headed parliament’s financial committee and took the side of Iraqi government, arguing that the KRG claimed more than its fair share of the state budget if allocated based on demographic percentage. The problem, of course, is that Iraq has not conducted a census since 1987. The KRG argues that the 17 percent must continue until a new census takes place.

The proposed 2018 budget also demands that the KRG exports no less than 250,000 barrels of oil per day and hand over the revenue to the federal Ministry of Oil. In other words, Baghdad is directly challenging the KRG’s autonomous oil policy and attempting to impose federal authority, at least when it comes to the management of oil exports and its revenue. With no specifications regarding the contracts already signed and debt obligations between the KRG and international oil companies, it is difficult to envision a smooth implementation of this item. Baghdad and Erbil will need to negotiate these details before the parliament votes on it. Without clarity on such minutiae, it will plant the seeds of future tension and obstruct budget implementation.

The draft budget also implicitly discredits the KRG by using the term “Kurdistan region governorates” in a way that implies plurality of Kurdish actors. The change in language sparked outrage from the KRG’s Council of Ministers and PM Barzani accused the federal government of aiming to abolish the KRG as a constitutional entity. Although the budget’s text does not mention it explicitly, Baghdad seems willing to deal directly with governorates if the KRG does not cooperate. Abadi previously rejected calls to divide the Kurdistan region, but he also argues that the KRG, controlled by the Kurdistan Democratic Party (KDP), violates the constitution and challenges federal authority. By directly dealing with the KDP’s main rivals—the Patriotic Union of Kurdistan (PUK) and Goran movement, both of whom share influence in Sulaimaniyya—Abadi could further delegitimize the KRG and undermine the KDP.

While Kurdish parties reject any policy aiming to delegitimize the status of Kurdistan as a unified federal region, they have also proved willing to strike separate deals with Baghdad when required. The obvious example was the PUK-Baghdad deal which facilitated the redeployment of federal forces in Kirkuk. More recently, however, the PUK and Goran also came to a separate deal—excluding the KDP—with Iraqi parties over the formation of the Independent High Electoral Commission’s board members. The deal provided each Kurdish party with a representative on the nine-member board, depriving KDP from having its own affiliate on the electoral commission. Despite complaints of disunity, the PUK and Goran may argue that they have simply followed the KDP’s example when it unilaterally controlled the region’s policy.

Some unconfirmed reports claim that Baghdad made any future negotiation—about key issues such as budgets, autonomy, and the nature of Baghdad-KRG relations—conditional on engagement with a KRG delegation that includes all major Kurdish factions. Whether true or not, it seems that Baghdad shares a common interest with the PUK and Goran in reducing the KDP’s influence in the region and at the federal level. This policy appears to capitalize on a weakened Masoud Barzani and his son, Masrur, who are blamed for the ill-fated referendum and increasing authoritarianism in Erbil. Nonetheless, these expedient alliances will likely change in Iraq’s fluid political context where ideological leanings fall secondary to familial and patrimonial considerations. It would not be surprising if the KDP, internally divided and increasingly isolated, focused on consolidating its power in its traditional strongholds in Duhok and Erbil, rather than championing the cause of Kurdish independence. In fact, the attacks at the PUK’s and Goran’s offices in some KDP-controlled areas after Masoud Barzani’s announcement that he is stepping aside as a president suggest a growing intolerance among Kurdish parties that might intensify geographic segregation.

Lastly, the KRG welcomed Abadi’s statement expressing his willingness to pay the salaries of the region’s public servants, saying it would provide Baghdad with the required information about its employees. But again, the devil is in the details. The federal government has long suspected that Kurdish parties exaggerate their number of employees to award their loyalists, given that Kurdistan has more public employees per capita than Baghdad. Abadi demanded that his own auditors verify the lists provided by the KRG and floated placing a possible ceiling on the number of civil employees and peshmerga.

In this and other issues, Iraq’s federal government has taken a more assertive posture, seizing the moment to gain more control and limit Kurdistan’s autonomy. But this policy requires strategic vision that addresses the long-term relations between the KRG and the federal government and the scope, nature, and feasibility of federalism in Iraq. This conversation has yet to begin, but the longer it takes, the more likely short-term calculations and de facto politics will impose their own unpredictable realities.

Image: Photo: An Iraqi flag is seen on a military vehicle at an oil field in Dibis area on the outskirts of Kirkuk following the Iraqi government takeover of the province from Kurdish control. Photo taken October 17, 2017. Taken by Alaa Al-Marjani.