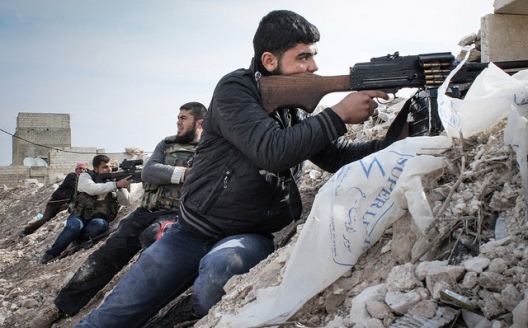 The Obama administration’s request for $500 million in fiscal year 2015 money to arm and equip elements of the Syrian opposition has generated confusion and skepticism. A recent (July 16) report in The Wall Street Journal suggested that 2,300 fighters—perhaps more—would be trained over an eighteen month period beginning sometime in 2015. If true, this would be the functional equivalent of doing nothing. The challenge for the United States and its partners presented by the metastasizing crisis in Syria is twofold: first, to expedite meaningful lethal assistance to Syrian nationalist elements fighting both the Assad regime and the Islamic State in Iraq and Syria (ISIS); and second, to build, outside of Syria, a large, combat-effective Syrian National Stabilization Force—a peace-enforcing army of Syrian officers and enlisted men that would eventually deploy to Syria to restore law-and-order in the entire country. The $500 million requested—ideally to be supplemented exponentially by contributions from partners—and the efforts of the US Department of Defense can be focused on the Stabilization Force.

The Assad regime’s nationalist opposition now finds itself targeted for destruction by both the regime and ISIS: putative enemies who have their own reasons for de facto collaboration. That opposition is currently trying to survive a brutal, two-front war. Aiding it is obviously the top priority.

Many of the Iraqi Shia militiamen raised by Iran and deployed to Syria to fight the regime’s nationalist opponents are now back in Iraq, confronting the ISIS threat there: not in Syria. The Assad regime’s exhausted army is not doing much in terms of fire and maneuver on the ground: the shelling, bombing, and starving of populated areas sums up its work; activities designed to pressure rebels into surrender. Were this not enough, nationalist rebels face ground assaults from ISIS fighters. Fully in accordance with organized crime practice around the world, the two biggest gangs—the regime and ISIS—fight one another over money (in this case oil fields) while simultaneously collaborating against common enemies. If they succeed in removing Syrian nationalists from the battlefield, it is more likely than not that they will arrive at an unstable live-and-let live arrangement whereby the regime can serve Iran and Hezbollah in the west and the ersatz caliphate can consolidate its domination of the east.

Even if the Syrian opposition is driven from Aleppo and other populated areas by the combined pressure of the regime and ISIS, the country will likely continue to disgorge refugees as a result of a thoroughly dysfunctional, totally impoverished, chronically uneasy partition of the country between two sets of violent, unrestrained criminals. State failure in Syria is already a profound threat to regional peace. If ISIS and the regime successfully divide the country that threat may manifest itself in ways far transcending the recent ISIS excursion into Iraq.

No doubt, valuable time has been lost in terms of responding effectively to Syria’s crisis. Clearly, nationalist elements on the ground need emergency support, including the ability to bring down regime helicopters murdering randomly though barrel bombs. Longer term, however, Syria will need to be stabilized by a military force capable not only of suppressing criminals and terrorists, but of attracting from the regime patriotic Syrian officers and soldiers open to a respectable, professional, non-sectarian, Syrian nationalist alternative.

What is envisioned is a ground force of approximately 100,000, featuring mechanized infantry, armor, and artillery capabilities. The mission of the Syrian National Stabilization Force would be to restore law-and-order to all of Syria, under the command and guidance of proper civilian authority. The assistance of external intelligence, logistical, and perhaps combat air capabilities may be required. But the stabilization of Syria must be a Syrian enterprise.

Indeed, no outside power or combination of powers wishes to undertake such a “boots on the ground” mission inside Syria The role of outside powers—led by the United States—would be to assemble, finance, train, and equip such a force outside Syria for eventual deployment inside Syria.

The core of the Syrian National Stabilization Force would be officers and soldiers who have recently served or currently serve in the Syrian Army. With three million refugees—to say nothing of nearly seven million internally displaced—a manpower pool sufficiently large to build a force of 100,000 should be available, but this is a proposition to be tested. If the “Friends of the Syrian People” supporting such an enterprise were to provide funding adequate to pay soldiers a living wage, recruitment should not be an onerous task. Indeed, pay, support for families, and the promise of saving Syria might well draw many recruits away from the regime and ISIS.

Armed nationalist elements inside Syria require urgent and robust assistance right now. They simply must be kept alive and fighting—ideally gaining ground in two directions—until properly relieved by a Stabilization Force. Indeed, it might be possible to introduce elements of this Force piecemeal to support and lead ongoing operations, particularly if the opposition’s Istanbul-based Interim government establishes itself inside Syria. Yet time is of the essence. A painstakingly glacial “vetting” process focused on those now carrying the fight against forces threatening US national security interests will not yield perfection. Yet it may well help kill the nationalist opposition by slowing to a crawl decisions on who gets trained and armed.

There are important questions to be answered for an initiative of this nature to get off the ground:

One hopes that these and other questions form the basis of planning presumably taking place in the US Central Command. There is no doubt that Syria ultimately will have to be pacified and stabilized by a force willing and able to restore order, enforce peace, protect civilians, and respond to proper civil authority. Inevitably, there are discussions of roles involving the United Nations, NATO, the Arab League, and perhaps others. Yet this is a job for Syrians. The United States, its allies, and its partners should help build and shape the requisite capabilities. The time to get started is now.