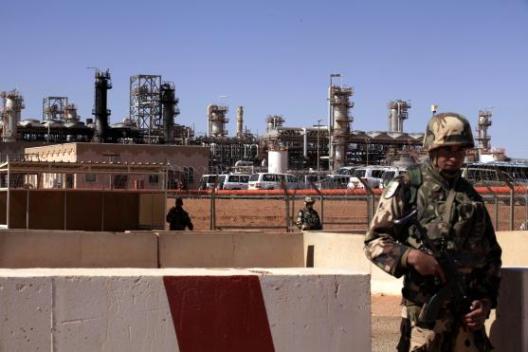 A year after forty workers were killed in a terrorist attack against one of Algeria’s largest gas facilities on January 16, 2013, serious reservations remain about the provision of security at the site. The government’s partners on the project, the UK’s BP and Norway’s Statoil, have not yet received the necessary assurances that they can safely return expatriate staff to the In Amenas facility, deep in the Algerian Sahara near the border with Libya. There is still no clarity on how the attack was allowed to happen, and how a repetition can be avoided.

The In Amenas attack was the only one on an Algerian oil and gas plant in the country’s history and arguably the most devastating act of terrorism against the state since it gained independence from France in 1962. Responsibility for the attack was claimed by Mokhtar Belmokhtar and his jihadist group Those who sign in blood, a splinter group from al-Qaeda in the Islamic Maghreb (AQIM), the organization’s North Africa wing. But there is still no clarity on where the attack was organized, or how the terrorists were able to evade security personnel at the Algeria-Libya border and around the site itself.

Against this background of ongoing uncertainty, long negotiations between the Algerian government and its foreign partners on the project, the UK’s BP and Norway’s Statoil, have failed to convince the companies that it is safe to return expatriate workers to the plant. Several investigations into the attack are under way, but the state has shrouded its investigations in a cloak of secrecy. Into the void, a range of theories have been put forward as to how such a catastrophic attack can have been allowed to take place. At the extreme, some security analysts have alleged that Algerian security services themselves planned the attack as a way of highlighting to its western allies that a very real terrorist threat persists in Algeria. If there was, in fact, a DRS plan to kidnap In Amenas staff and then ‘rescue’ them, it backfired spectacularly.

A more widely accepted argument is that the terrorist attack on In Amenas was a failure of Algerian intelligence, of its army and security services, and of security at the In Amenas site itself. The threat to southern Algeria was already known. Insecurity in the Sahel—the region just south of the Sahara that includes several of Algeria’s neighbors, among them Mauritania, Mali and Niger—has deteriorated in recent years, accelerated by the collapse of the Libyan state following the fall of the Qadhafi regime in 2011 and by the successful insurgency in northern Mali the following year. Days before the In Amenas attacks, the Algerian government raised the stakes in its fight against militant Islam by allowing jets supporting the French intervention in northern Mali to use Algerian airspace.

There were also more specific indications of a direct terrorist threat to Algeria in the weeks preceding the attack. An article in a government-run Algerian newspaper in November 2012 claimed that security services had uncovered a plot by a twelve-member cell to bomb “gas pipelines, oil installations and foreign companies operating in the field” to promote the aim of the secession of the Algerian Sahara from the rest of Algeria. One French counterintelligence specialist says that authorities failed to realize that a confrontation between Algerian security forces and Islamic militants coming from Libya on January 13 was part of wider terrorist plot. At the In Amenas site itself, Paul Morgan, the Briton charged with the security of expatriate workers and one of the victims of the attacks, warned in the weeks leading up to the attacks that he could no longer guarantee the safety of workers in the wake of a wave of strikes by local drivers and a breakdown in his relationship with local guards.

The In Amenas incident highlights the Algerian government’s inability to ensure effective security in the future to a multitude of foreign oil and gas installations spread across a vast area of desert in an unstable region. A report published by a security expert on behalf of Statoil in September 2013 concluded that “security measures at the site were not constructed to withstand or delay an attack of this scale, and relied on military protection working effectively.” Whether these shortcoming can be addressed remains open to question.

A key sticking point in the negotiations between BP and Statoil and the Algerian government is the provision of onsite security. At the moment, Algerian law prohibits foreign companies from providing their own armed security to protect its facilities. This leaves oil and gas operators with no choice but to employ local security firms. These are often used as little more than a retirement plan for former security service officials and their effectiveness is varied at best. The Algerian government shows no sign of backing down on the issue, which may explain the impasse that has prevented the return of expatriate workers to In Amenas despite twelve months of talks.

Alternative solutions are being considered. Construction has resumed of an airstrip at the plant that was begun in 2012 but interrupted by the attacks. This would allow for expatriate workers to commute for the day to the In Amenas facility from Algeria’s main oil hub, Hassi Massoud, without involving an hour drive in each direction to the nearest airport. But such an arrangement, involving a three-hour flight in each direction, is surely unsustainable in the long term, and presumes that terrorist attacks can only take place at night.

Beyond the perimeter of the plant, there are problems too. The government has pledged to improve coordination between the army and the gendarmerie, and to provide additional forces to the south of the country, but the real extent of the changes is difficult to quantify. In the meantime, signs indicate that a long-running power struggle between the security services and President Abdelaziz Bouteflika has recently swung in Bouteflika’s favor. Key DRS directorates have been moved into the purview of the army, and senior officials removed from their posts. Whether or not this denotes a loss of DRS power, and it likely does, the changes themselves could have a destabilizing effect on the effectiveness of the organization.

The longer the problems at In Amenas remain unsettled, the greater the fallout. Output from In Amenas remains substantially below capacity, with only two of the field’s three processing units back in production. In the absence of expatriate workers, planned development projects at both In Amenas and In Salah to ensure the longevity of production from the fields have been suspended, suggesting long-term consequences.

Algeria suffers increasing damage to its reputation as a country that can provide physical security to its investors. Always crucial, this is paramount in a country where the terms of business for foreign firms are among the toughest in the Middle East and Africa region. If security concerns cannot be allayed, investors may be deterred from bringing their business to Algeria, which could have critical consequences for a country whose oil and gas sector has been in a slump for almost ten years.

Richard Nield is a journalist, photographer, and filmmaker based in London focused on political and security developments in the Middle East & Africa.