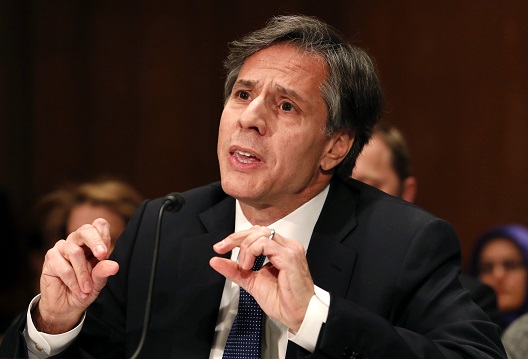 In his January 27, 2015 statement before the Senate Committee on Banking, Housing, and Urban Affairs, Deputy Secretary of State Anthony Blinken made a cogent case for Congress dropping the threat of new sanctions on Iran while nuclear talks are ongoing and while the interim Joint Plan of Action (which freezes certain Iranian nuclear activities) remains in effect. At the same time, however, he claimed that the administration would “also continue to hold [Iran] accountable for its actions on other fronts.” After going down an impressive list of Iranian transgressions, Blinken noted, “Similarly, we have called out Iran for its support of the brutal regime of Bashar al-Assad in Syria.”

“Calling out” someone is a staple of the American schoolyard. Although there is something to be said for publicly condemning the murderous Syria policies of Iran’s Supreme Leader, Russia’s president, and the like, words unaccompanied by action often fail to produce desired policy results. After mentioning the “call out,” Blinken observed, “We hope that Iran soon recognizes that there is much more to be gained through constructive engagement in the region and promotion of inclusivity than through disruptive policies.”

“Disruptive policies” indeed. When Syria’s Bashar al-Assad decided, in March 2011, that peaceful protest should be put down with lethal violence, he signed death warrants for over 200,000 Syrians. He set in motion a process that would stampede 3.5 million people out of the country, drive another 7 million from their homes within Syria, and incarcerate tens of thousands under conditions featuring torture, starvation, and sexual abuse. His over-the-top repression, replete with strong sectarian overtones, helped to resurrect al-Qaeda in Iraq from the dead and brought it to Syria in the forms of the so-called Islamic State (ISIL or ISIS) and the Nusra Front. In all of this, Assad has had the unflinching and regime-saving support of Iran, which views him as an irreplaceable asset fully in the service of Hezbollah: Iran’s Lebanese missile and rocket pressure point on Israel.

Yes, Iran’s support of Assad has been “disruptive.” Tehran has helped to create the signature humanitarian abomination of the twenty-first century. The costs to the people of Syria have been unspeakable. The prices being paid by Syria’s neighbors—all friends of the United States—are dangerously out of control. Iran’s supporting role in this travesty has also burdened a humane and thoughtful US president with the prospect of a legacy tarnished forever with a Levantine Rwanda: in this case a multi-year program of mass murder whose Iranian facet may account in large measure for the failure of that president to stop or at least mitigate the slaughter.

Evidently, the Obama administration believes that “calling out” Iran and counseling it on the merits of “constructive engagement in the region” are all that can reasonably be expected of the United States so long as nuclear discussions are ongoing. Presumably, the throwing of a spanner into the Assad regime’s ability to unload barrel bombs and chlorine canisters onto residential neighborhoods with absolute impunity would upset Iran, perhaps inspiring the Supreme Leader to abandon the nuclear talks and opt instead for a new wave of economic sanctions while oil prices plunge. Seen from this don’t-rock-the-boat-with-Tehran point of view, the suffering of Syrians merits a “call out” and nothing more.

Perhaps there is also a sense inside the administration that a successful nuclear negotiation will persuade Iran that its penetration of the Arab east should be abandoned: that “constructive engagement in the region and promotion of inclusivity” will be the wave of the future. Leave aside estimates of the numbers of Syrian children yet to be sacrificed before this hypothesis is sufficiently tested. Is there any evidence at all that Iran’s “disruptive” policies in Syria, Lebanon, Iraq, and Yemen are somehow linked to the absence of a nuclear understanding with the P5+1? Is there any evidence that the activities of General Suleimani and his Quds Force operatives do not represent a carefully calculated conclusion about Iran’s regional interests, one easily (and perhaps best) pursued without the impediment of destabilizing nuclear weapons? Is all of this some kind of cosmic misunderstanding to be cleared up by arriving at a nuclear agreement?

President Obama has credited himself with “strategic patience.” It is indeed a worthy attribute. But it has nothing to do with doing nothing in the face of mass murder, particularly when doing something—causing, for example, regime helicopters loaded with barrel bombs to fall from the sky—need not involve invasion, occupation, or even a slippery slope. Yes, the Supreme Leader will not like it. He would prefer to be called out. He has no trouble being on the receiving end of earnest, Dutch Uncle advice about avoiding disruptive policies. In the end, however, he has no problem negotiating with the P5+1 while facilitating mass murder in Syria. The United States should not have a problem negotiating with Iran while making impunity more difficult for the murderers.