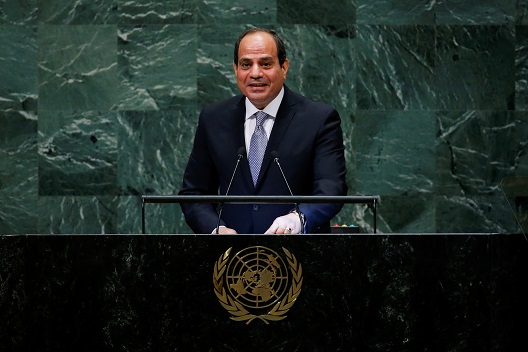 It can be easy to read this dramatic event as the ideal conclusion of the democratic aspirations that guided the 2011 uprising and therefore the final stage of the political counter-revolutionary process that began with his arrest in 2013. However, it is more difficult to understand what political reverberations this event may have: indeed, there are a plurality of reasons, beyond Morsi’s premature death, which make today’s Egypt a more fragile country than it appears at first sight, clenched in the fist of strongman politics, military supremacy, and widespread repression.

Economy, security, and democratic processes are the main challenges on the long road to 2030—the new presidential term established through the constitutional referendum in April 2019—and maybe it will define the success of Abdel Fattah al-Sisi’s policies. A challenging scenario that the Egyptian authorities have decided to approach through a doctrine that makes stabilizing internal plans a matter of national security that sees consolidating the economy as a fundamental tool to reach this goal; and above all at the expense of democracy. Is Egypt truly a stable and secure state? Maybe an in-depth understanding of the current political, economic, and security frameworks could be the real legacy of Morsi’s dramatic death.

Since the election of Abdel Fattah al-Sisi as president in 2014, Egypt’s political stabilization process has passed through a mix of police/military and legislative repression, which has led to a new autocratic government, in which the state has reaffirmed its control over all sectors of society without resolving the existing structural problems.

Through a strategic clampdown in the last two years, Sisi eliminated potential competitors, created a small circle of loyalists within the army, and appointing them to key positions of the state. He sought a sort of dynastic regime. Sisi tightened his grip on the Egyptian intelligence apparatus by appointing his sons to high-ranking, influential positions within various security agencies. The approval of controversial constitutional amendments held through a referendum last April represented the crowning of this strategy: the constitutional amendments extended Sisi’s term in office until 2030, limited the judiciary’s autonomy, and locked the military’s political and economic power in place. In this way, the already omnipotent armed forces would thereby formally be above the constitution accelerating the militarization of the state.

On the other side, the extensive use of social control and the brutal police-state repression directed against all types of opposition is a clear sign of the regime’s need to carry out strong securitization of the state’s institutions, branching out into all social sectors. At least 60,000 political antagonists, social activists, and members of the banned Muslim Brotherhood are currently in jail awaiting hearings (according to Human Rights Watch and Amnesty International data), and more than 1,891 people have been sentenced to death since 2014.

The opposition is silenced and the media and Internet are controlled and restricted by state censorship. Sisi is a candidate to go down in Egyptian history as one of its most autocratic rulers, however, at the same time his moves can hardly hide the inner structural fragility of the system.

At the same time, the economy is experiencing a condition of gradual development. A positive trend that originated in the second half of 2017, thanks also to the IMF’s three-year Extended Fund Facility program (a 12-billion-dollar loan agreement, which could be further renewed) aimed to ensure new socio-economic measures in terms of justice, public administration, and transparency. Moreover, the energy sector (thanks to the launch of Zohr—a giant reservoir gas field discovered in the Egypt offshore by Eni in 2015—and other discoveries in western Egypt and offshore), tourism (11.3 million visitors in 2018, the best performance since 2012) and the construction sector once again confirmed themselves as the driving forces of Egypt’s economy. At the same time, the pick-up in private consumption (+4.2 percent in 2018) and the growth of GDP (+5.3 percent in 2018) are the greatest results of Sisi’s first presidential term.

Nevertheless, the positive changes in the macro-economic framework have no significant effects for the millions of Egyptians who continue to suffer from long-term structural problems, many of which remain unresolved and closely related to each other. The state still remains exposed to chronic problems (such as dirigisme or the strong presence of the military in the economy. Unofficially the military enterprises may account for up to 20-60 percent of total national GDP; 3 percent of the GDP according to the state’s available data. Additionally, the 61 percent of the population under age 30 searching for jobs prevents consolidation of the economic structure and the revival of social reforms. In fact, it is important to keep in mind that development and stability are highly volatile elements in Egypt today. Political tensions and economic unsustainability are closely linked to issues related to internal security and borders, and therefore any negative signal to that effect would inevitably spill over into the country’s economic and political dimension. In addition, political violence and terrorism still represent two important threats that can impact and undermine the path of national recovery.

Also, in light of this, there is a worrisome lack of interest among Egyptian authorities to consider unresolved economic problems as a great danger for national stability. Anger, frustration, and discontent are widespread feelings among broad sections of the population. If neglected these elements could favour the emergence of new violence, which can also be exploited by terrorist groups. Revolts and strikes due to increases in fuel and bread prices—caused by cutbacks in the subsidy system (accounting for some 10 percent of the annual national budget) and to currency devaluation (the Egyptian pound devalued by 32.3 percent and continues to lose value)—have shown an increasing level of dissatisfaction and resentment among the poorest sections of the population towards the authorities.

The economic reforms, even though necessary, have contributed to defining the current social discontent in which reformism is misused by government as a functional instrument of the power to sweep the country’s great problems under the carpet. For example, the propagandistic use of mega projects (such as the expansion of the Suez Canal or the new administrative capital 45 km from Cairo) is a constant in the presidential narrative and these often represent a litmus test to divert attention from serious and unresolved problems: runaway unemployment (9.9 percent, but this rate is much higher among young people—32.6 percent), the increase in energy and transport prices, a low private entrepreneurial capacity, corruption, and lack of transparency in the bureaucracy are just a few of the daily problems afflicting the Egyptian population.

In conclusion, solutions to the chronic problems of the Egyptian economy and society, as well as his abilities to manipulate the “deep state” will define Sisi’s place in the country’s history.

Alessia Melcangi PhD is an assistant professor of Contemporary History of North Africa and Middle East, at Sapienza University of Rome in the Department of Social Sciences and Economics (DiSSE).

Giuseppe Dentice is an associate research fellow at Middle East and North Africa Centre, Italian Institute for International Political Studies (ISPI) and a PhD Candidate at the Catholic University of the Sacred Heart, Milan.