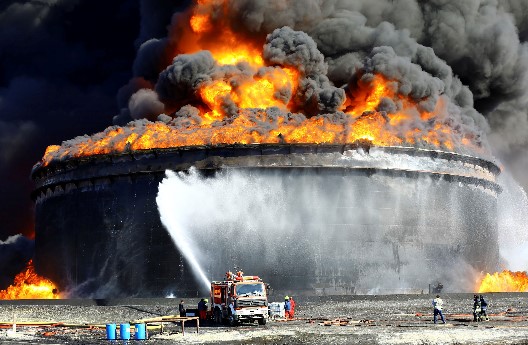 Over the last 100 years, the Arab world has been shaped and defined more by its oil resources and revenues than any other factor. From the early twentieth century up until the present time, the region has both breathed and bled oil. It has been responsible for almost all aspects of its social, economic, and political life. Both its international and domestic public policies have been singularly determined by the reserves, exports, and revenues of oil.

Economists have long known that natural resources have far more often been a curse than a blessing, particularly for the places that have discovered large reserves of oil. “The Dutch Disease,” as it has been called, refers to the distortive effects of natural resources, primarily oil. These resources create an artificial bubble of prosperity through over-valued currencies and cheaper imports, driving out the local traditional industries and agriculture and focusing economic activity on exploiting natural resources, all of which makes diversifying the economy difficult.

Worse still, the state uses these revenues to subsidize basic foods, goods, and public services and to finance public expenditures, turning the entire economic system into a welfare and entitlement state. This practice distorts the real value of work, products, and services. When states provide medical care, education, food, and electricity for free or at extremely low costs to all citizens, rich and poor alike, this creates an artificial system of costs and values. It turns the entire population into dependents who become entangled in an artificial, fairytale economy, where goods and services do not meet their true costs. These misrepresentations distort the foundations and incentives of public, and even private, institutions and turn them into empty shells dependent on largesse from above to survive, rather than providing real value and earning the public’s trust.

Sadly, this bubble economy has largely plagued the Arab World to various degrees for at least sixty years. Even countries that do not have large reserves of oil, such as Egypt, Syria, and Yemen, have succumbed to the oil curse through low cost oil imports, grants, aid, and remittances from their own labor working in nearby, oil-rich countries.

Governments have so far followed only two real models through which they have managed to develop public policies that have mitigated the negative effects of the natural resource curse. Norway, for example, has developed a model of managing its oil revenues through an independent authority, tasked with collecting and managing the funds generated from oil sales in a transparent and well-governed manner with specific objectives, such as investing the bulk of it in a “future generation fund” and financing the government budget for specific items. Alaska adopted the second model, whereby citizens of the state receive direct payments for part of the revenues that the state government receives from oil concessions. The remainder goes towards funding specific local government programs, which turns these funds into a taxable and spendable income for citizens rather than a tool to distort costs and values.

The Arab world, however, has neither adopted such examples nor developed a working model of its own. So far, most of the Arab countries provide guarantees for public employment and untargeted universal subsidies for a host of public services, such as education, medical care, electricity, and basic foodstuff. This is an unsustainable fiscal position in the long run, creating a grossly distorted, uncompetitive, wasteful, and corrupt economic dynamic, where the privileged and well-connected benefit excessively while the rest live on ever-decreasing opportunities and scrap.

Although many reasons drive the evolution of this economic structure, laced with its negative impact on the social and political frameworks in the region, the reasons behind the lack of serious reforms remain simply and purely political.

The region views tampering with the status quo as political suicide. Any attempt to affect meaningful change can potentially trigger widespread anger and protests, leading to political revolutions that can topple governments. The widening circle of dependence by large segments of the population on cheaper albeit low quality food, energy, education, and medicine, coupled with a narrower and shallower pool of opportunities in the private sector for job prospects, has placed the political leadership between a rock and a hard place.

Of course, in addition to the Norwegian and Alaskan models, a number of well-tested policy options could deal with these issues in a measured, sequential, and peaceful way: targeted cash-transfer subsidy programs, creating better business environments, improving educational systems to meet the demands of the private sector, more innovative human capacity building and youth employment programs, better resource management, transparent wealth distribution mechanisms, deeper economic integration among the Arab countries, and more efficient and targeted public expenditure and investment strategies. Unfortunately, the region still lacks the political courage to take advantage of them.

One possible policy option to test, at least, is to turn part of the oil revenues into income for citizens through direct cash transfer instead of masking it as subsidies. This policy would put individuals in charge of their own money and reduce waste, corruption, and cost and value distortions in the economy. Carefully and strategically targeting such cash transfers to address specific sectors, economic activities, and income groups would create positive momentum that can have a multiplier effect across the whole economy.

The key to all of this entails enabling the political leadership to choose the right set of policies and enhancing their ability to communicate them effectively to their population in a credible and transparent manner, thereby generating the public trust needed to implement them.

In other words, there is an urgent need for strategic vision on the side of both the political leadership and the public at large. Each must realize the urgency of these issues and the need to implement economic policy to get ahead of the curve. Ignoring these systemic economic problems for much longer would only fuel frustration—particularly among the large youth population in the Arab world, estimated at nearly 65 percent of the population and who played key role in the Arab uprisings of 2011—and result in having to deal with them as political revolutions or extremism.

Despite the political and academic considerations and debate, the Arab economic framework as a whole and on the level of each country separately as it stands today needs a serious overhaul with dramatic reforms sooner rather than later. As countries like the United States move closer towards energy independence and as climate change concerns become more urgent in policy circles, the dramatic changes to the oil age will reduce the ability of Arab countries to continue their total and blind dependence on the revenues it generates. The choice before them is to adapt now on their own or be forced to later in spite of themselves.

The elastic band, between the economic reality of the region and its socio-political governance frameworks is reaching a breaking point. The added pressure of delayed reform, lower and lower oil revenues, and the lack of economic diversification and opportunity can only ensure that it will snap in violent and unpredictable ways sooner rather than later.

Hafed Al-Ghwell is a senior non-resident Fellow with the Rafik Hariri Center at the Atlantic Council in Washington DC and former adviser to the Dean of the Board of Executive Directors of the World Bank Group.

Image: Firefighters work to put out the fire of a storage oil tank at the port of Es Sider in Ras Lanuf December 29, 2014. (Photo: Reuters)