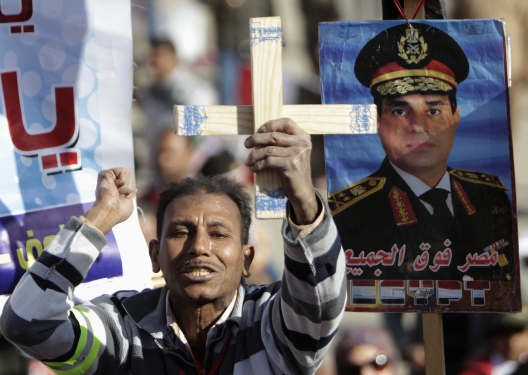 Ultimately, the formation of a new government in Egypt should be about one word: Competency. But the current nature of politics substitutes another word entirely: Sisi. Local analysis revolves around the question of what the development means in terms of the defense minister’s anticipated candidacy for president, and when he will take off his uniform to announce it.

Egyptians have been waiting for some time to know the answer, and Coptic Christians are among the most expectant.

“If Sisi is a candidate I will definitely support him,” said Naguib Abadir, a Coptic founding member of the secular Free Egyptians Party. “Egypt needs a president with charisma and who commands the respect of the people.”

Abadir admitted a heavy handedness in the current resigning cabinet, but says these are not normal times. He referred to local allegations tying Sinai militants to Khairat al-Shater, the Brotherhood’s now imprisoned second-in-command, and noted that in the Hamas Charter, the group refers to itself as a wing of the Muslim Brotherhood. “This is not a competition between political factions,” he said. “Millions of Egyptians feel they are in a war.”

Such an existential crisis provides the raw material for a new autocrat, as many fear in the West. But Abadir, who served as a reserve member on the constitutional amendment committee tasked with revising the 2012 constitution, believes the new document passed in a January referendum is sufficiently crafted with checks and balances. The new president will be forced to work closely with a prime minister approved by the parliament, which can place an impeachment referendum before the people.

Beyond the person of Sisi, Christians celebrate their own victories in the constitutional text. While sharia remains the main source of legislation, interpretation of sharia is removed from the religious body of the Azhar to the more civically minded Supreme Constitutional Court. The charter also obliges the issuance of laws to ensure both that Copts achieve ‘appropriate representation’ in parliament and can regulate the building of churches outside the vagaries of presidential and security will. The state has often been negligent on this as well as with the prosecution of crimes against Coptic citizens. Now, Copts like Abadir are confident the new constitution will empower the rule of law for all citizens on the basis of equality.

It is, however, not a unanimous sense of confidence. There is an undercurrent that is not so sure. Mina Magdy, general coordinator of the mostly Coptic Maspero Youth Union, believes the government is using both Copts and ordinary Muslims under a guise of fighting terrorism. He divides the community into those active in civil society and those accustomed over decades of authoritarianism to entrust their politics to the church. Both groups, he said, voted yes for the constitution, but their rationale was quite different.

“Many Copts in the second group didn’t read the constitution,” he said. “For them a ‘yes’ to the constitution meant a ‘no’ to the Muslim Brotherhood and an endorsement of the June 30 revolution.”

This endorsement extended to the person of Sisi, celebrated in posters plastered everywhere on Egyptian streets. “They come to the streets and make a festival, carrying Sisi pictures and saying to him, ‘Come and rule Egypt.’” But while Madgy admitted many Coptic civil society leaders will likely vote for Sisi, some in the Maspero Youth Union are offended at the billing of Sisi as a revolutionary candidate. The goals of the revolution – bread, freedom, and social justice – have not yet been achieved, he explained, so how can we celebrate?

So while many Copts and Egyptians in general urge on the government to stamp out the Muslim Brotherhood, Magdy and others sense danger. He opposes the protest law used to clamp down on unauthorized rallies, and frets at the violations of press freedom. But while he views the Brotherhood as an organization with a violent ideology, this does not make every individual member a terrorist. Magdy is appalled at the police response to his political enemy, enacted by an interior minister whose men previously lobbed tear gas into the papal cathedral. “They are going crazy and using extreme force,” he said. “We want the Brotherhood to fall, but by law, not by violence.”

If there is a segment of Coptic population similarly troubled by the actions of the current government, they tend to hem and haw in resigned support. An even smaller contingent explains it this way: “The Coptic community has taken the wrong direction, but they had no alternatives,” said Magdy Samaan, a Coptic journalist with the UK’s Telegraph. “Their mistake is they went too far in supporting the military with such enthusiasm. They should have been wise and not put themselves in the front lines.”

Samaan also supported the removal of Morsi, but finds the actions of the military amount to a coup. Sisi is not to be trusted, he believes. The constitution is good, but Samaan questions whether or not it will be applied. The military establishment poised to run the country once again is the same body that served under Mubarak, he said, and that regime was no friend of Copts, nor honored the constitution.

“I am afraid once the military achieves its goals the Copts will be left behind to feed the Islamist anger,” said Samaan. Brotherhood websites in Arabic have been filled with vile polemic against the Coptic stand against Morsi, even labeling Egypt now to be a Christian nation ruled by Coptic business tycoon Naguib Sawiris.

Christians lent their support to the nation’s roadmap, and by all appearances the majority stands with Sisi. But Samaan worries that as under Mubarak, full Coptic rights as citizens will remain in doubt. “They already didn’t protect the churches after dispersing the Islamist sit-in [in August]. I’m afraid the future will not just be attacking buildings.”

But these are worries for another day. Copts, like most Egyptians, long for stability and have placed their hope in the military to see the country through these troubled times. If initial signs are worrisome to those in the West, Egyptians plead for patience. The nation has changed after January 25, they say, and cannot go back to the status quo.

In the meanwhile, yet another post-revolutionary government is asked to prove it. A Sisi presidency will likely settle the question either way, but for the most part, Copts have embraced the optimism.

Image: Photo: A supporter of Egypt's army chief General Abdel Fattah al-Sisi holds a cross, next to a poster of Sisi, in front of Abdeen Presidential Palace in downtown Cairo, January 24, 2014. A wave of bomb attacks targeting police hit Cairo on Friday, killing six people on the eve of the third anniversary of the uprising that toppled autocrat Hosni Mubarak and raising fears that an Islamist insurgency is gaining pace in Egypt. REUTERS/Mohamed Abd El Ghany