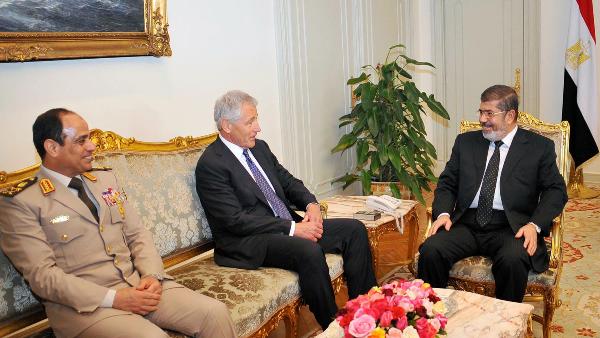 In his civilian black suit and blue tie, US Secretary of Defense Chuck Hagel landed in Egypt last week saluted by numerous military officials in uniform. After talking to his Egyptian counterpart, General Abd Al-Fattah al-Sisi, Hagel met with President Mohammed Morsi.  In a short visit of only a few hours, Hagel commended the “responsible” role that the military played in Egypt’s revolution, and expressed US support for “political and economic reforms” in the country. While the security situation in Sinai has been troublesome as of late, Hagel spoke of the continuity of strategic partnership and cooperation in anti-terrorism efforts. Interestingly, both the Egyptian Ministry of Defense and president kept most of the details of the visit out of the press, issuing only abrupt statements about it.

Beyond Hagel’s positive rhetoric, everything he hurriedly saw in Egypt stands in stark contrast with American military protocol. First of all, as opposed to American tradition where the military has long subjected itself to the control of civilian institutions, the Egyptian military is above civilian rule and scrutiny. According to the new constitution— drafted by a body dominated by the Muslim Brothers and other Islamists— the minister of defense must be an officer, and the parliament does not enjoy access to military financial affairs.

Hagel arrived in Cairo amidst tense negotiations between the IMF and the Muslim Brotherhood government over a $4.8 billion loan. On the sidelines of Hagel’s visit, himself a seasoned corporate manager and republican who would believe in transparent and competitive markets, the military and the Muslim Brotherhood continue to collaborate to manipulate the Egyptian market for their own benefit. While negotiating about the loan’s strict requirements of economic reform, the military and the Muslim Brothers both take an active role in making the Egyptian economy function on patronage, lack of transparency, and corruption.

For example, the current legislature,  largely dominated by the Muslim Brotherhood, recently helped the military expand its unaudited, untaxed business empire.  Last month, the Shura Council’s Committee of Human Development transferred the property rights of a state-owned car factory to the Ministry of Military Production. After visiting the factory along with the Islamist head of this committee, the minister announced that he is seeking foreign partnership to renovate it. In another incident, the websites of the brotherhood and its Freedom and Justice Party (FJP) were the first to post the news about the same ministry proudly receiving orders to assemble and sell a million tablets to government bodies, including the ministries of education and religious endowments, both headed by members of the Muslim Brotherhood. None of the above transactions took place based on fair and competitive public tenders.

On a parallel front, the Muslim Brotherhood manipulates the market for its own benefit. While arguing with the IMF against eliminating subsidizes as part of an economic reform plan, FJP officials use state subsidized goods for electoral purposes. The Minister of Supply has granted the FJP, his party, a monopoly over the distribution of bread and butane gas cylinders, the main two items of consumption for Egypt’s poor. The FJP then delivers the goods to poor urban districts, for a small monthly fee. In previous elections, the Muslim Brothers distributed charitable items in rural and poor urban areas, asking for votes in return. At that time, the Brotherhood businessmen carried the costs. Now, they are deploying state resources to collect future votes, and the taxpayers are footing the bill.

In another example, rumors spread in the private business community that Hassan Malik, a brotherhood business tycoon, targets enterprises whose profits declined after the revolution in order to establish market monopolies. When the rumors became widespread, with some press reports supporting them with alleged evidence, an anchor from al-Jazeera, a channel known for its Muslim Brotherhood leanings, published a long article in an Egyptian newspaper defending Malik. Whether the rumors and supporting news reports were true, they left local and foreign investors skeptical about a less corrupt market in post-revolutionary Egypt.

While Chuck Hagel’s main concerns were related to security, regional issues and Egypt’s transition to democracy, these recent developments in the economy only add to the country’s woes. Whether there is a fair or distorted market, stability does not seem to be an achievable goal in Egypt anytime soon.

Historically, the Pentagon is partially responsible for Egypt’s current quagmire. Since the 1980s, the Pentagon aided the Egyptian military in forming business ties with the American military-industrial complex and other corporations, turning a blind eye to the lack of transparency and accountability in such ties. In addition, a considerable number of Egyptians today buy into the conspiracy theory that the Muslim Brothers are in power only because the US invested in a relation with them, so the US turns a blind eye to the current regime’s violence against protesters and human rights violations.

In his very short visit to Egypt, Chuck Hagel stated, “I wanted to stop in Egypt to reaffirm American commitment to Egypt’s emerging democracy [and] encourage the democratic and economic reforms that are under way.” In today’s chaotic Egypt, there are no reforms. There are only illicit alliances and endless discontent.

Zeinab Abul-Magd is an Assistant professor of Middle Eastern history at Oberlin College and the American University in Cairo.