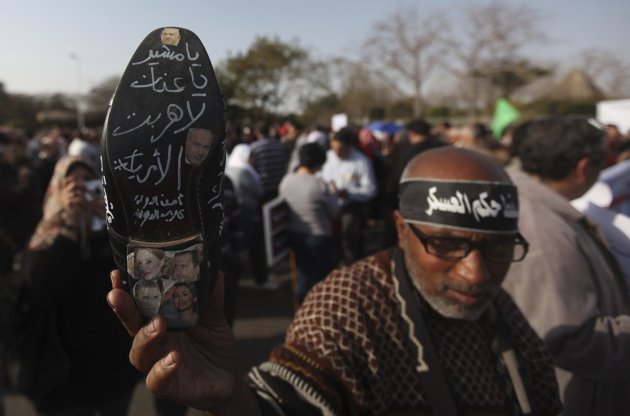 Political conflict is brewing as Islamist and liberal political forces face off over the formation of the 100 member constituent assembly that will write Egypt’s next constitution. But only a few days after its formation, the committee’s legitimacy is already wearing paper-thin, with at least twelve prominent liberal, leftist and female members resigning in protest of Islamists’ domination of the constitutional process.

After heated debates, a joint session of People’s Assembly and Shura Council convened on March 24 to choose the members of the assembly and agreed to implement the Freedom and Justice Party’s proposal for allocating 50 of the assembly seats to current MPs and the other 50 to representatives chosen from outside parliament. Liberal and leftist political forces are increasingly opposed to this formula, over concerns that the high threshold for MPs will enable Islamists to dominate the constitutional process. And the list of 100 members chosen by parliament confirms the worst fears of the liberal minority: Islamists hold at least 65 of the 100 seats, while women and Christians hold a combined 9 seats (three of the members of female Copts).
Critics of the constituent assembly have already mobilized protests outside of Mandinat Nasr hall, where the joint session to elect members was held.  The assembly’s legitimacy is also weakened by the absence of key revolutionary and liberal figures – such as Mohamed ElBaradei, Alaa al-Aswany or Hamdy Andeel – whose stature and reputation for integrity would have leant credibility to the constitutional process.
Another key concern for critics of the constitutional process was the total lack of clarity and transparency regarding guidelines for the selection of the committee. The parliamentary committee tasked with devising criteria did not adequately publicize or explain the selection process. Even members of the assembly itself were outraged by the opacity of the criteria, with prominent members including the liberal independent Amr Hamzawy, Lawyers Syndicate President Sameh Ashour, Mona Makreim Ebeid (a leading Coptic politician) and Ahmed Harrara (the activist who lost both eyes in anti-military protests) resigned on March 27, taking much of the assembly’s perceived legitimacy and revolutionary credentials with them. The marginalization of liberals, Copts and women from the constitutional process will likely be compounded by this wave of resignations, because the vacant positions will be filled from a list of alternates whose top ten slots are held by FJP members – meaning that Islamists could see their majority on the assembly increase significantly as replacements are appointed.
Pressure for transparency is rising, as leading liberal public figures and representatives of trade movements and political movements urged the SCAF to issue an addendum to the March 30 Constitutional Declaration specifying clear standards for selecting the constituent assembly. The Wafd Party’s executive bureau may soon recommend that its members boycott the assembly.
Liberals and leftists who feel they are underrepresented in the Islamist-parliament are now overwhelmingly boycotting and opting out of the constitutional process, leaving the Salafi Nour Party and Muslim Brotherhood ample room to shape the future of Egypt’s legal framework. Liberals are accusing Islamists of inheriting the authoritarian legacy of the former ruling National Democratic Party and are determined to vote down the new constitution in a popular referendum later this spring. While the Islamists dominating the constituent assembly would be wise to respond to public pressures for transparency and provide assurances of their commitment to an inclusive and transparent process, unfortunately they are likely to brush off the wave of resignations and rising opposition and persevere with their illiberal agenda.
Failure to form a committee that is sufficiently representative of all political and social forces will likely provoke another round of mass protests against Islamists (and their perceived cooperation with the military). Major political forces are already calling for a million man demonstration on Friday, March 30 to denounce the constituent assembly and demand representation.  If Islamists do not yield to these demands for adequate representation of minority political and social forces on the committee, there is no hope that Egypt’s next constitution will be perceived as a legitimate foundation for the post-Mubarak system.