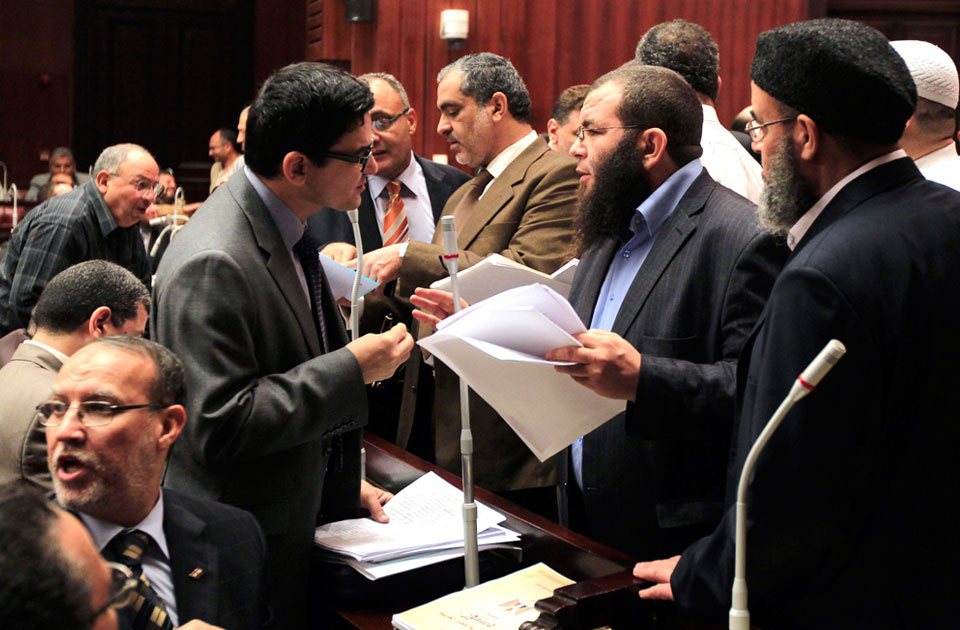 Not only did the Constituent Assembly rush suddenly into a voting session on Thursday, it also appears to be rushing through the voting process itself, aiming to place the draft constitution on President Mohamed Morsi’s desk by nightfall. The vote is taking place so quickly, that at least on one occasion, Hossam al-Gheriani, Constituent Assembly president, missed the fact that two members had objected to a specific article. Coincidentally, the Muslim Brotherhood has also started drumming up support in favor of the final draft. Islamists seem locked into an existential race that leaves little doubt that the assembly will approve a final document within hours.

Walking out on the Constituent Assembly did not provide the leverage secular members expected, with the walkouts replaced with 11 reserve members. Freedom and Justice Party’s Azza Garf, known best for her controversial statements on women’s rights, provides a glimpse the kind of substitute to which the assembly is resorting. As the Constituent Assembly speeds through each article, members appear to agree upon most of them unanimously. Classic sticking points, such as over Article 5 that states, “Sovereignty is for the people…” saw rare disagreement, but the Assembly plowed ahead anyway.

The latest draft of the constitution continues in the tradition of its predecessors. Plagued with ambiguous wording and contradictions, it does even less to guarantee the rights of Egypt’s citizens. Among the most glaring contradictions comes in the form of three consecutive articles. Article 43 guarantees freedom of belief, while Article 45 guarantees freedom of thought and opinion. Sandwiched between the two, article 44 prohibits insulting prophets. In other words, Egypt’s constitution now contains a blasphemy clause, inherently contradictory to the rights guaranteed by its adjacent articles. In the context of countless blasphemy trials emerging in Egypt over the past few months, this article sparks particular concern.

Another contradiction comes in the form of Article 2 when compared to 219. Article 2, voted upon unanimously, declares the principles of Islamic Sharia as the main source of legislation. Later in the constitution, Article 219 elaborates on the “principles of Sharia,” equating it with Sunni jurisprudence. Not only do these two articles contradict each other, but as pointed out by Ragab Saad the addition of this article, if passed through in the referendum, would mean this is Egypt’s first constitution to adopt a specific religious doctrine for the state. The debate over the inclusion of article 219 partly motivated many of the secular minded members to walk out of the assembly. At the time of this writing, however, the body had not yet voted on whether or not to include this article.

While women did not fare very well in the previous drafts, this most recent draft removes any mention of articles guaranteeing women’s rights. Only four references remain to women (mar’a or nisa’) in the constitution. The introduction states that honoring women is essential to a dignified nation, and refers to women as sisters and mothers, speaking of them purely within the framework of family. The new draft of the constitution merges Articles 9 and 68 – creating Article 10, which states that family is the basis of society, and is founded on religion, ethics (morality) and patriotism. It adds that the state provides mother and child services for free, and guarantees women access to health, social, economic care, inheritance rights, and harmony between her family duties and public life. Previous concerns over an article that placed women’s rights within the framework of Islamic law have been replaced with concerns over no mention of women’s rights at all.

While freedom of the press and media is “guaranteed” by the constitution, Article 48 on press freedom goes on to state that monitoring of the press is prohibited except in times of war and national mobilization, the latter a brand new addition to the draft. The drafting committee, however, defined neither war nor national mobilization within the clause, leaving far too much room for interpretation and could easily allow for a clamp down on Egypt’s press at times of national unrest. When taken within the context of current affairs in Egypt, with the press coming under constant fire – whether in the form of dismissals, convictions or more – the enshrinement of judicial or governmental control over the press does not bode well.

The article has also been amended to once again state that media outlets cannot be shutdown, nor their publications confiscated, unless with a court order. This is yet another example of a contradiction with the constitution’s guarantees for freedom of expression in Article 45. Journalist Syndicate head, Mamdouh al-Wali had pushed for the adoption of an article stating that the media would be governed by popular authority. His suggestion was rejected by the assembly on the pretext that the only authorities recognized by the state are the legislative, judicial, and executive. Al-Wali’s efforts were likely an attempt to maintain press freedom in the face of the repressive draft.

As the Brotherhood initiates early mobilization for a vote in favor of the draft, the secular movement is focused on its fight against President Mohamed Morsi’s controversial decree. In March 2011, similar Islamist efforts to mobilize votes in their favor succeeded in pushing the constitutional amendments through with 77% of the vote. A secular movement often criticized for its lack of focus and unity has recently found common cause, setting aside differences and working together to fight. The constitutional referendum may prove to be an even bigger test than Morsi’s decree.