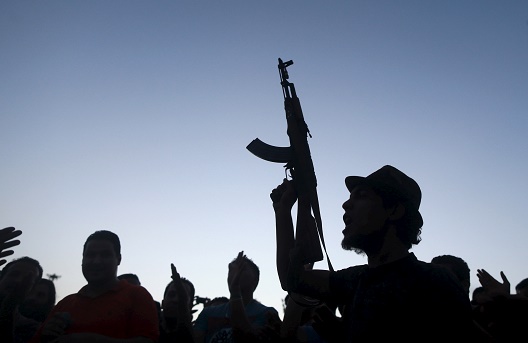 People take part in a protest against candidates for a national unity government proposed by U.N. envoy for Libya Bernardino Leon, in Benghazi, Libya October 9, 2015. (Reuters)

The UN Special Envoy for Libya Bernardino Leon announced his final proposals for Libya’s national unity government on October 8, after more than a year of negotiations between the country’s rival factions. Both of Libya’s rival parliaments, however, remain split on whether to accept or reject the proposed agreement. Agilah Saleh, the President of Libya’s internationally recognized House of Representatives (HoR) in Tobruk, claimed on October 18 that members had reached consensus to reject Leon’s latest version of the agreement—despite the utter lack of a vote on the matter.

More than sixty HoR members protested Saleh’s conduct when he abruptly interrupted the session, read out the statement of rejection, announced the session closed, then left the parliament building. Members were still discussing the final position of the HoR that would have included support for the Government of National Accord (GNA), but with key conditions before endorsing the final agreement. These conditions included a return to the initially signed version agreed to back in July, implying that the last minute changes that Leon made to the so-called final text would not pass a vote in Tobruk.

One of Leon’s key changes included the distribution of power in the Executive Council (the proposed interim body with presidential powers) to include a third deputy from the city of Misrata. According to the July agreement, the Executive Council would consist of a Prime Minister and two deputies who would represent Libya’s three historic regions: Tripolitania (West), Barqa (East) and Fezzan (South). Given the candidacy of Fayez Sarraj from Tripoli for Prime Minister, the two deputies would have been from the Barqa and Fezzan. The addition of a third deputy from Misrata has angered many in eastern Libya in addition to the powerful town of Zintan in the west whose forces have battled Misrata militias for political and territorial control over the past four years. Representatives of Benghazi and Zintan have now demanded the inclusion of their own deputies—with veto powers—in the Executive Council.

Leon’s last minute changes to the initialed agreement in Skhirat upended the political negotiations, made no less difficult by his insistence that Libyan factions may only accept or reject this final version—a stance seemingly contradictory to his own eleventh-hour alterations.

Leon also failed to address questions surrounding the Libyan National Army (LNA) and its General Commander Khalifa Haftar, deferring the matter to the future GNA. Yet Leon’s paradoxical sidestepping of this key issue diminishes hopes for the formation of a unity government at all. Hardline supporters of the LNA and General Haftar have always argued that the dialogue process is only meant to undermine the Army and empower militias, a position reinforced by Leon’s unfortunate endorsement of figures such as Abdulrahman al-Swehli and Fathi Bashagha (both from Misrata) to the key posts of President of the State Council and the Chairman of the National Security and Defense Council, respectively. As a result, hardliners in Tobruk saw the perfect opportunity to mobilize parliamentarians, local municipal councils in eastern Libya, and key tribes against the latest peace proposals.

For any peace proposal to work in Libya it must carefully weigh any potential candidate and his or her impact on the peace process and a future unity government. Endorsing Swehli and Bashagha for such sensitive posts without providing guarantees for the LNA, its leadership, and their supporters was a miscalculation on Leon’s part. Without a military balance between formerly warring factions, a unity government could not succeed. A more delicate course would have included the preservation of the LNA and its leadership for the duration of the peace agreement or securing a key post for Haftar within the GNA (other than the General Commander of the Armed Forces) such as Chairman of the Defense and National Security Council or the Minister of Defense.

Relying on the relative consensus achieved through the yearlong dialogue process to birth a new unity government in Libya has become an increasingly difficult if not an impossible task. Yet the lack of agreement threatens a complete power vacuum in Libya, given the expiration of internationally recognized House of Representatives on October 21. Without a unity government, it is likely that Libya would lose control over its assets abroad and raise the potential for an international ban on oil sales due to the lack of a legitimate government that can handle oil revenues. The failure to agree a unity government would result in increased hostilities, the collapse of local ceasefires, and the failure of reconciliation initiatives. Such an environment provides fertile ground for groups such as the Islamic State (ISIS or ISIL) to expand and operate with impunity.

If this scenario becomes reality, it would leave the international community with limited options on how to handle the situation in Libya. Countries could choose to adopt a containment approach, managing the flow of migrants and the expansion of ISIS through limited and targeted intervention such as naval blockade and air strikes. But a military approach risks the involvement of regional players such as Egypt, Algeria, the EU, and the United States acting unilaterally inside Libya to protect their own national security interests. Alternatively, the international community could choose to deal with two different Libyas: one in the east supported and dominated by the LNA and one in the west supported and dominated primarily by Misratan and Islamist armed groups. Yet this approach would mean a de facto partition of the country, paving the way for disintegration of Libya into smaller pieces, especially in the western and southern regions.

The unity government proposal represent an opportunity that must not be missed by Libyans and the international community to get their war-torn country back on track—and prevent a Somalia-like fragmentation from unfolding on the Mediterranean.