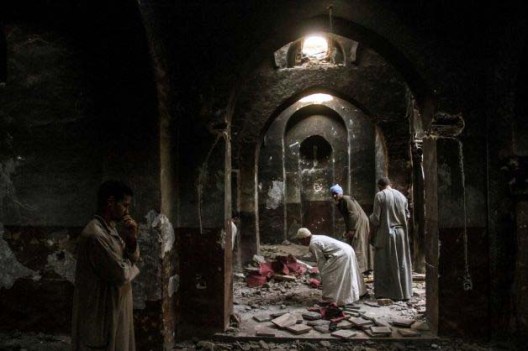 The Brotherhood’s penchant for doublespeak is nothing new. In April 2013, in the aftermath of the Boston Bombings, and in September 2012, in the wake of the attack on the US embassies in Libya and Egypt, the Brotherhood and its political arm, the Freedom and Justice Party, were quick to condemn the attacks, in English. In Arabic, however, they often take a much less conciliatory and more aggressive tone. The armed forces’ raid on Dalga, a town in the Upper Egyptian governorate of Minya, has proved to be yet another example in how the Brotherhood is presenting two different narratives.

Since the ouster of former president, Mohamed Morsi on July 3, the situation in Dalga has continued to deteriorate. Islamist extremists were reported to have taken control of the town for almost seventy-six days. During that time, a fourth century church was burned down, and Christian homes and businesses targeted. Christian residents had to pay neighbors for protection, while some 100 families have since fled the area.

Dalga is one of the worst examples of retaliation against Egypt’s Copts since Morsi’s removal, accused of playing a dominant role in engineering his ouster. At the pro-Morsi sit-ins in Raba’a al-Adaweya and Nahda, the stage was witness to blatant incitement against Christians, leading to unprecedented sectarian violence in Egypt’s modern history, with over 100 churches attacked.

Rights groups condemned the authorities’ slow response to the ongoing crisis in Dalga, and on September 16, security forces moved into Dalga in an attempt to regain control of the town. Explaining the delay, however, Minya Governor Salah Ziada said, “”We were late because we were worried for people’s lives.”  While there were reports of an exchange of gunfire, and the use of teargas and birdshot by security forces, the raid ended with no reported casualties and fifty-six arrests.

The Muslim Brotherhood has been quick to roll the Dalga raid into an on-going crackdown on the organization and its supporters, but has once again offered different reactions in English and in Arabic. Arabic Brotherhood media outlets make no mention of the sectarian violence that Christians in Dalga faced. In fact, they have gone so far as to accuse Copts in Dalga of lying to gain the sympathy of the world.

On the Freedom and Justice Party’s official website, they write: “A number of Christian families started to spread false news about being detained by locals of the village as hostages and claimed that some of the village residents burned their churches. The Coptic Diaspora exploited the news to prepare the international community, particularly, American politicians for a new massacre in Dalga.

Not only has the Muslim Brotherhood denied the violence Copts faced, they have also accused them of spreading false news and colluding with the authorities, in order to give cover to an impending massacre of Morsi supporters, which never happened.

In contrast in English, the Muslim Brotherhood’s London office sent a statement to journalists condemning the attacks on Dalga’s Copts, expressing “solidarity” with their “Christian brothers and sisters.”

The Brotherhood’s official website, Ikhwanweb, similarly condemned the attacks on Christians, expressing solidarity with Dalga’s Copts, and called on authorities to “protect all citizens and places of worship.”At the same time, however, the statement placed the blame of the sectarian attacks on the military and ‘thugs’. The official statement read:

In 2012, the Brotherhood’s doublespeak resulted in a tense online exchange between the US Embassy and the official English language Brotherhood on Twitter.  After the attack on the US embassy in Libya, in Arabic the Brotherhood called for more marches and protests at the embassy and in Tahrir Square, while in English deplored the incident.

At the time, the US Embassy in Cairo publicly called them out, responding to the official English language Twitter account Ikhwanweb’s condemning the attacks on the embassy with this:

This duality of language can be seen throughout the Muslim Brotherhood’s discourse, even in the narrative following Morsi’s ouster. While in English they define themselves as pro-democracy and anti-coup protesters, in Arabic they cling to the language of martyrs and, at times, violence. When Morsi’s wife took the stage in Raba’a al-Adaweya in August, she called not for a democratic Egypt but for an Islamic one.

Despite the duality in their discourse being highlighted time and again, and a website, mbinenglish, dedicated entirely to translating Arabic press that contradicts their English narrative, the Brotherhood continues to soldier on, with two completely different approaches in each language.