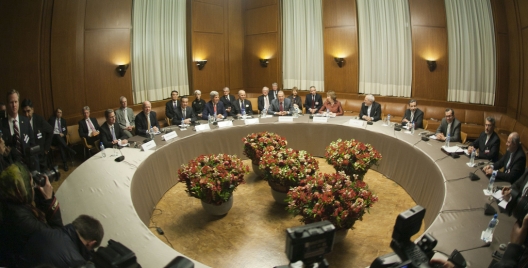 In the abstract and in isolation, a US-Iranian nuclear deal is a welcome development. While it does not eliminate Iran’s nuclear program, it does complicate any future Iranian efforts to develop a robust nuclear military capability. It also shows that the United States and Iran, two sworn enemies, are capable of rationally pursuing their interests through negotiation. It may bother Israel and the Gulf Arab states, but that does not mean, a priori, that it does not serve US interests. In any case, the United States’ military presence and commitment to the security of its allies in the region remain intact.

Leaving aside debate regarding its fairness, a nuclear deal in the absence of a broader US-Iranian regional settlement is merely a short-term arms control agreement. Like the chemical weapons deal with the Syrian regime, it betrays a lack of US appetite for tackling the more challenging and arguably more urgent issues of regional security and stability: the civil war in Syria, sectarian violence and terrorism in Lebanon, Iran’s conflict with Israel and the Gulf states, and Iraq’s descent into chaos. Just as the chemical weapons agreement effectively freed the United States from having to punish Syria for violating US red lines, the nuclear agreement allows it to avoid tackling its thornier issues with Iran including Syria, Hezbollah, and its long-standing aggression towards US allies.

Admittedly, the nuclear deal could conceivably pave the way for a broader US-Iranian regional settlement over these issues. Under the current US administration however, this is highly unlikely. For one, the United States does not appear overly concerned with the catastrophes in the Levant or Iraq, at least outside of a narrow security prism focused exclusively on the jihadist presence in Syria. Secondly, Iran’s proxies in Syria and Lebanon are performing relatively well on the battlefield, and have absolutely no incentive to make concessions to their opponents in the absence of military pressure from the United States or support for its supposed allies in the opposition.

It is therefore not the specifics of the US-Iran deal that are troubling but its narrow scope, in the complete absence of a US regional strategy other than willful neglect. This approach clearly serves Iran’s interest, by allowing it to sustain its total commitment to a regime victory in Syria, its strategic relationship with Hezbollah, and its aggressive regional posture. Given that Iran’s economic and diplomatic weakness under US sanctions compelled it to make a deal, it would appear that the weaker party to these negotiations was rewarded quite handsomely and will be encouraged to persist with its ruinous policies in Syria and Lebanon.

Why the United States would see an equal interest in such a deal is less clear. Obviously, however, it drew no linkage between Iran’s regional behavior and the nuclear agreement. It is indeed difficult to shake the notion that the United States made a deal not as an attempt to bring greater stability to the Middle East but as quite the opposite: an attempt to further distance itself from the region’s more urgent and demanding crises. For despite its complexities, an arms control agreement with Iran is far easier than meaningful engagement with the deep-rooted problems of the Middle East.