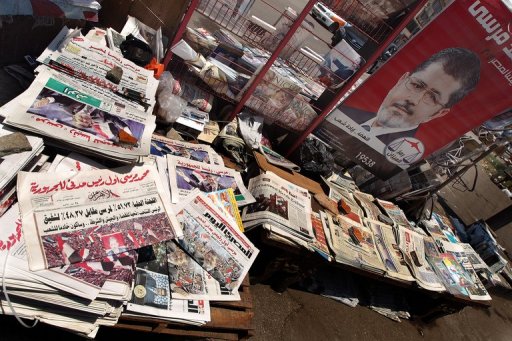 Initial concerns over media restrictions in Egypt have not subsided with two new incidents surfacing in the past two weeks indicating a continued clamp down on freedom of the press. Paired together with a draft constitution that does not go far enough to guarantee a free media, the outlook remains bleak.

Al-Gomhoreya editor in chief, Gamal Abdel Rehim, appointed a few months ago by the Shura Council, was dismissed last week after an article published in the state newspaper falsely stated that former Supreme Council of the Armed Forces (SCAF) leaders, Hussein Tantawi and Sami Anan were facing a travel ban. This move follows two earlier instances of censorship at al-Gomhorreya, as reported by the Arab Network for Human Rights Information.

The dismissal was also accompanied by a statement by President Mohamed Morsi, in which he went to great pains to defend the former SCAF leaders. “As president of the republic and as commander-in-chief of the Armed Forces, I stress my full respect for current and former military leaders,” he said.

Morsi went out of his way to speak out in Tantawi and Anan’s defense – a move which was not lost on many. Egyptian journalists were quick to lash out at Morsi’s defense of the very SCAF members who were at the helm of the country during some of the bloodiest crackdowns on street protests. Morsi’s statement sent a message that the SCAF, even its former members whom he edged out, rank far higher than those who lost their lives in the Egyptian revolution.

Abdel Rehim will have a chance to present his case before the State Council Administrative Court on October 30. In his complaint, he called his suspension at the hands of the Shura Council an “unprecedented” move in the history of Egypt’s press, adding that this kind of interference was not seen under the deposed Hosni Mubarak. Mubarak’s restrictive penal code states that journalists who do not publish retractions or corrections of false information could face at least 3 months in prison. However, according to Abdel Rehim, he was not given the opportunity to print a retraction.

Abdel Rehim’s recent appointment as al-Gomhorreya Editor in Chief by the Shura Council was met with its own fair share of criticism. In 2009, Abdel Rehim was accused of inciting sectarian strife against Egypt’s Baha’i minority. While the Shura Council’s appointments were met with an outcry from the Journalist’s Syndicate, Abdel Rehim’s dismissal triggered a similar reaction. The Syndicate released a statement saying that the dismissal violates Egypt’s Press Law, which states the syndicate alone is authorized to investigate its members.

More recently, one of many cases brought against TV presenter and owner of al-Faraeen satellite channel ended with a guilty verdict, carrying with it a four month prison sentence and a 100EGP ($16) fine. The case is one of many in which Okasha faces charges of insulting the president. Openly critical of both the Muslim Brotherhood and the January 2011 uprising, Okasha was a vocal supporter of former regime member and presidential candidate Ahmed Shafik.

Reporters Without Borders issued a statement following Okasha’s conviction, saying “Such a conviction and sentence based on the criminal code sends out a highly negative message for freedom of information in Egypt.” The conviction also comes after al-Faraeen was temporarily taken off the air.

Okasha faces additional charges including incitement to assassinate the president and overthrow the government. The cases brought against Okasha are made possible by Egypt’s current media laws which remain the same as they were under Mubarak, with the exception of one small change made by Morsi. In August, he issued a law preventing the pre-trial detention of journalists. Egyptian lawyer and human rights activist Gamel Eid is currently in the process of working on amendments to several of the articles in the penal code relating to press freedom in preparation for the next elected parliament. There are currently 32 articles in the penal code related to publishing crimes, more than half of which carry with them imprisonment as a possible punishment for journalists.

These recent cases are not the only cause for concern in regards to press freedom in Egypt. Articles relating to the media in the draft constitution could also allow for censorship. While Article 42 (previously Article 10) prohibits press monitoring, it goes on to say that newspapers, publications and media channels will “be subjected to limited monitoring” at times of war. Critics of the draft constitution point to this as particularly problematic, as it opens up Egypt’s media to becoming a propaganda tool, as was the case during the 1973 War.

Article 216 of the draft constitution also sees the creation of two new bodies – the National Council for Audio and Visual Media will oversee radio and television broadcasts, and the National Council for Press will oversee the printed and digital press. The bodies are intended to “ensure the freedom of media” and will “protect the interests of the public, the media, and ensure media institutions’ commitment to ethics.” Article 217 stipulates that the National Bureau for Press and Media will manage state media – including its assets.

In theory while the creation of independent bodies to oversee state media can be viewed as a positive step, the constitution does not indicate how its members will be appointed – with earlier reports indicating the selection would be left to the elected president and Shura Council. Depending on the selection process, as was the case with state editors, these monitoring bodies could be handed over to people sympathetic with the Brotherhood president. Worse still, their powers could simply be overridden as the Journalist’s Syndicate has accused the Shura Council of doing with its dismissal of Abdel Rehim.