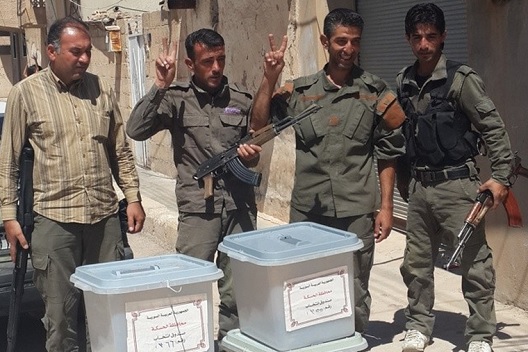 On June 3, the Assad regime held presidential elections in the parts of Syria it still controls. In Northern Syria, however, Kurdish security forces confiscated the ballot boxes. Serbest Rezan, responsible for the Kurdish security police in the city of Qamishli, said they confiscated at least 120 polling stations. The Kurds plan to continue disruption of the Syrian government’s plans so long as it does not recognize the Kurdish administrations created in northern Syria by the Democratic Union Party (PYD).

“One day before the election, we spoke with some people from the regime. We told them that we did not want any election boxes in our Kurdish neighborhoods. They sent us a message, that they just want to have ballot boxes in the security triangle,” Rezan said.

Kurdish security forces nonetheless decided to confiscate the ballot boxes; the Kurdish administration said that they would not hold Syrian presidential elections under these war conditions, while the Assad regime slaughtered thousands of people. Given the regime’s recent attacks against Kurdish positions in Hasakah city and Aleppo, the Kurdish administration also feels that the regime would not accept any form of Kurdish autonomy, further exacerbating tensions and disincentivizing any cooperation.

The Kurdish administration did not prevent residents in its jurisdiction from voting, but confiscated election boxes in Kurdish neighborhoods of Hasakah and Qamishli, where there is still a regime presence and where the regime held elections in the neighborhoods inhabited by Arabs and Christians.

Many Syrians felt forced to vote. Their reliance on government salaries or the need to continue their education at state schools made them vulnerable to government retaliation. Despite the confiscation of ballot boxes in Kurdish controlled areas and relative independence from the state, Kurdish officials still believe that the predetermined outcome makes such efforts irrelevant.

“It is just a show,” said Rezan, who noted that the ballot boxes confiscated by the Kurdish security officials found the boxes prefilled with votes for Bashar al-Assad. “They already took all the votes.”

Interestingly, the Syrian government did not react aggressively against the Kurdish obstruction of the vote in Northern Syria. The Assad regime clearly does not want to open another front in the city of Qamishli where the Kurds are strong, nor in Hasakah, where clashes ended after the main Kurdish militia, the People´s Defense Units (YPG) managed to push the regime back after it attacked the YPG in the Kurdish mufti neighborhood of Hasakah city.

The Kurds will now prepare their own elections on September 21. The administration has already assigned elections committees to prepare for a less farcical process. The presidential elections in Syria only serve to reinforce the sense that the only solution for the Kurds is autonomy. The Kurdish administration will continue to focus on establishing their own territorial jurisdiction, refusing to recognize the government in Syria so long as the Assad regime does not reciprocate.

Wladimir van Wilgenburg is an analyst of Kurdish politics for the Jamestown Foundation and a contributing writer for Al-Monitor. He is currently reporting from Northern Syria.