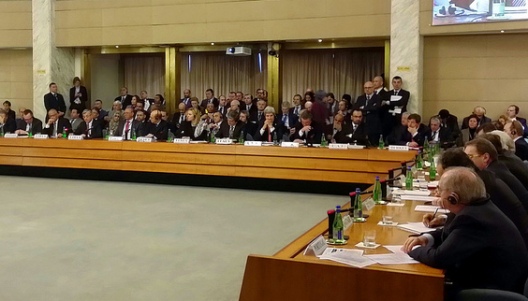 Libya’s international partners and allies gathered in Rome yesterday in a show of support for the North African country’s transition to democracy since Qaddafi’s ouster in 2011. Overshadowed by the growing crisis in Ukraine, as evidenced by the questions put forth to US Secretary of State John Kerry, the Friends of Libya conference nevertheless gathered high-level diplomatic leadership in a symbolic gesture of the international community’s commitment to stand by Libya as it faces the challenges of a post-conflict, post-revolutionary state. In terms of outcome, however, the conference produced a mixed bag illustrating divisions within the Libyan government and confusion among its international partners.

The conference was a success insofar as it demonstrated a marked shift in the discourse on Libya away from a narrow security framework to a more political one. Based on the remarks and communiqués, it appears the international community has finally understood that Libya’s challenges are rooted in political paralysis. In Paris last year, diplomats focused entirely on the deteriorating security situation and emphasized a need to build up Libya’s national security apparatus, which has driven efforts to train Libyan soldiers. Over the last several months, policymakers have learned that the growing insecurity is a consequence of Libya’s problems—not the source—and that centrifugal forces exploit the weaknesses and questionable legitimacy of state institutions to advance their own parochial agendas. As such, statements issued yesterday by everyone from Under-Secretary-General for Political Affairs Jeffrey Feltman to Russian Foreign Minister Sergei Lavrov placed particular emphasis on the democratization process, the necessity to empower Libya’s institutions, and the importance of consensus-building through the national dialogue to resolve the political crisis.

These statements, however, lacked a nuanced or analytical approach to Libya’s internal developments and needs, reflecting a feeble attempt at reaffirming support while maintaining enough distance to avoid any criticism of interference. International partners indeed want to help Libya, but do not know where to begin. In her opening remarks, Italian Foreign Minister Federica Mogherini asserted that Europe stands ready to help Libya if it could demonstrate the capacity to absorb the assistance, citing frankly that divisions within Libya hindered development. Overall the message to Libya seemed to be: we want to help, but not without guarantees from the Libyan government that assistance would make a difference. The Libyans did not exactly deliver.

The conference reflected the political paralysis and polarization gripping Libya in all its glory. Over the last several months, political bickering between the General National Congress (GNC) and Prime Minister Ali Zidan’s government escalated, characterized by the legislature’s threats to force Zidan from office and Zidan’s manipulation of the GNC’s internal divisions to stay in place. As a result of the endemic rivalry, Libya sent two delegations to Rome; in addition to the one formally headed by GNC President Nuri Abu Sahmain, Zidan led his own team, undermining any semblance of a unified Libya with which the international community could engage.

Originally, organizers intended for the conference to provide a platform where Libya could present its proposals for assistance in an effort to demonstrate ownership over their transition process. Instead, the international community received a range of asks as expressed by Abu Sahmain and Zidan, who each delivered remarks, citing priorities that highlighted the growing chasm between the camps. Abu Sahmain devoted most of his attention to presenting the GNC as a legitimate entity and fiercely defended the legislature as tensions grow over its dissolution since its mandate expired on February 7. He pointed to the formation of the February Committee, which will craft proposals to amend the Transitional Constitutional Declaration to pave the way for possible elections that would replace the current GNC, depending on progress on constitution drafting. Abu Sahmain also called for Libyan unity, making a reference to the historical figure Omar Mukhtar, but notably left out any reference to the national dialogue process—an initiative endorsed by Zidan and which the prime minister stressed could serve as a basis to unify Libyans around a common identity. In his speech, Zidan discussed in unspecific terms the importance of developing Libya’s private sector and implementing a weapons collection program. The contrasting emphases highlighted the fragmentation of Libyan state, its divergent interests underscoring the international community’s predicament in wanting to provide assistance but scrambling to find reliable and collaborative partners among Libyan authorities.

Despite its mixed scorecard, the Rome conference was no small feat in an environment of competing political priorities and constrained resources. In the third year since the NATO-supported revolution, the Friends of Libya meeting demonstrated that Libya remains on the foreign policy agenda. Such symbolic gestures can generate momentum for action if the stakeholders commit to the principles outlined in the concluding communiqué issued by the Italian foreign ministry. Most notably, “participants agreed to assess all capacity and institutional building, training, equipment and procurement needs and activities on a regular basis in cooperation with the international partners. Participants agreed to establish an international partnership for Libya to monitor progress in the implementation of the Compacts,” referring to the two-pronged political and security tracks for which the conference delineated pertinent areas of responsibility for the Libyan authorities and their partners around the world.

The stakeholders’ commitment to these pledges as yet remains unknown. The absence of Libyan government cohesion could further wear on the patience of world leaders who might abandon the long-term goal of bolstering Libya’s political institutions, opting instead for short-term containment of the growing destabilization. Abandoning the political question for security, however, would bring the country back where it started—an option both Libya and its partners should avoid at all costs.

Image: US Secretary of State John Kerry joins other participants during the plenary session at the International Conference on Libya in Rome, Italy on March 6, 2014. (Photo: US State Department)