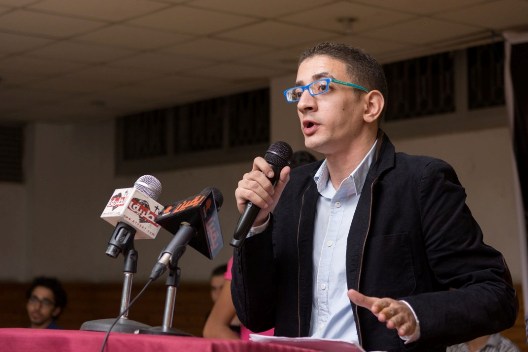 Maryam Milad disappeared in 2012. Last seen in the church of St. Anthony in Shubra, her father believes his now eighteen year old daughter has been kidnapped and perhaps married off to a Salafi Muslim somewhere. Police, he says, have been uncooperative.

“I plead with all the authorities in Egypt,” he said at a prayer meeting highlighting more than a dozen similar cases. “Put yourselves in the place of us parents.” According to Ebram Louis (pictured above), founder of the Association for the Victims of Abductions and Enforced Disappearances (AVAED), this is just the tip of the iceberg. He has documented 500 such cases since the revolution.

Louis has testified to the Egyptian public prosecutor, the police, the parliament, and the National Council for Human Rights. Having gotten nowhere, he turned to God. He organized the prayer event bringing together Egypt’s three Christian denominations, but made sure media was present as well.

He also made sure it was not simply a Coptic event. An Azhar affiliated imam, Sheikh Ahmed Saber spoke and insisted this was an Egyptian issue. “I comfort the families who have lost their children,” he said. “God will repay them for this evil, because ‘God is present,’” deliberately quoting the famous expression of the late Pope Shenouda.

Only twenty-six years old, Louis is already a seasoned activist, having worked with the April 6 Movement and the National Association for Change. But it is his Coptic work which has brought him the most trouble. He says his name was included on an Iraqi al-Qaeda list of 200 Coptic personalities who should be killed. He says also Abu Islam, the firebrand Salafi preacher sentenced to prison last June for insulting Christianity, has filed four complaints about him for causing social strife.

Helping the families of disappeared children does not sound like controversial territory. Louis, however, places blame very squarely. “There are cases which have been planned abductions,” he says, “by a group trying to Islamicize Christian girls, which has been operating since the time of Sadat.”

Fr. Athanasious of the Baramous Monastery in Wadi Natroun agrees. He has been investigating such cases for twenty years. “This is a complex crime, but when it is motivated from faith and belief sometimes it finds support from the police,” he said. “Sometimes thugs do the work, but usually they are tied to fundamentalist religious groups.”

The complexity of the crime is what often offends Salafi Muslims, even Muslims in general, who find terms often used like ‘kidnapping’ do not represent reality and are used to tarnish their reputation.  “We defend the true Islam and the true Christianity, for there are no religions in the world from which people have not gone astray,” said Sheikh Saber. “The problem is not with Islam, it is with people who use the Qur’an in improper ways.”

The social reality of such disappearances is where human nature meets latent sectarianism. A Muslim young man and a Christian young woman, even underage, can meet and fall in love all over the world. But where these relationships are frowned upon in conservative Egyptian society, things often go wrong.

“Once a girl loses her virginity it is a shame and she can’t return to her family,” said Mira Salama, a journalist with the government newspaper Rose al-Yusuf, who assisted at the prayer event.  “Men think they are the owner of their wives and daughters, and such an assault on a female will cause him to lose his honor. Many times the family will leave their community and go to live elsewhere.”

Things are complicated further by the complicity of the police, according to Fr. Athanasius. Whether through bribery, sectarianism, or simple indifference, security often does not concern itself with the return of Coptic girls. “We file an official police report, though it is often ignored,” said Louis. “There are a million girls missing, they say, why should we go after yours?” So when a girl disappears and the police are not helpful, a combination of all these factors leads to the explosive word – kidnapping. It hides the shame of the community and is consistent with the inaction of the police.

But what if the girl went willingly? Louis formed AVAED in 2010 around the time of the Camilia Shehata controversy. The wife of a priest, she disappeared suddenly one day and her family held demonstrations claiming she was kidnapped. Salafi Muslims, meanwhile, filled the streets of Cairo claiming she had converted to Islam, and the church was the kidnapper to force her back.

The story is contested but it appears she simply ran away from a difficult home situation. Rumors circulated about lovers and head coverings, but in the end, she released a video – with her husband – saying she was safe and still a Christian.

Shehata is an example of a disappearance unrelated to love. But according to AVAED chief field researcher George Nushi, up to 60 percent of all cases are. Most of these, he said, involve Muslims of bad intention. The girl becomes infatuated, but then she is told she cannot go home again.

“Not all examples are forced,” said Louis. “Some begin as love affairs but then spiral into warnings. ‘What will your family do to you if you go home? Convert to Islam so we can be together.’ But afterwards she is told if you go back you will be killed as an apostate.”

The girl is pressured, threatened, and oftentimes used. The relationship began on false pretenses, and the girl winds up being held for ransom, or worse, placed in a brothel. AVAED has received testimony from escaped Coptic girls who say several others were there with them. If not a brothel, they are housed in a Salafi ‘safe house.’ Louis relates the testimony of one girl who was running wildly through the streets of Shubra, calling out for anyone to take her to a church. He met her there, and she told him her young Muslim friend turned her over to be kept in the guesthouse of a local Muslim charity organization. There were twenty other Copts still inside.

According to Louis, Shubra priests are aware of the reputation of this charity as a place of extremism. But when they convinced security to check out the premises, they found nothing amiss.  Such events lend credence to observers who suspect that activists and families exaggerate their claims. Issues of honor and shame make it easier to blame an already suspected ‘other.’ Additionally, in an overpopulated country with weak rule of law, one must often scream louder than anyone else simply to gain attention.

Louis’ screaming may be such, but though the name of his organization implies it, he does not want to exaggerate by using loaded terms. “We do not say ‘kidnapping’ in the beginning,” he said, “We say ‘disappearance.’” Nushi says only 5 percent of girls suffered violent kidnappings in the traditional sense.

How does he then have such certainty that malevolent, organized Salafi groups are involved? Of their 500 cases, ten have escaped to tell their story. These stories reveal patterns which indicate similar activity, locations, and even phone numbers.

When a girl is reported missing, AVAED conducts a careful investigation to determine the facts. They ask the family to introduce them to the girl’s friends, Muslim and Christian, so they can interview them and learn all they can. They provide a volunteer lawyer if the family cannot afford one, and they will assist in conducting a demonstration if they believe it is necessary to draw attention to the case.

Regardless of the reality of these disappearances, the rule of law must hold. In Egypt, the age of consent for both marriage and conversion is eighteen. “It does not matter if there was a love relation or interest in another faith,” said Rifaat Fekry, a Protestant pastor participating in the prayer evening. “As long as they are minors the state must investigate with complete neutrality.”

Paradoxically, this is why some Copts believe they should not involve the Ministry of the Interior. Its role is simply to enforce security, and issues of human rights are not their priority. And as the Camilia Shehata case proved, this issue can be explosive.

Kamal Zakher, a Coptic intellectual, suggests instead that Copts go to the newly created Ministry of Transitional Justice. Perhaps there, under the new regime, this issue might find resolution.

“We are not weak, we have not come to cry, nor do we call for Coptic rights,” he said amid the tears of many. “We demand our rights as Egyptian citizens.” But it is the inattention of most Coptic intellectuals, as well as the church, that drove Louis to create AVAED in the first place. After one mother’s particularly moving testimony he jumped to the stage.

“We will stay with you,” he promised. “We will continue until these girls come home.”

Jayson Casper is a writer with Arab West Report, Christianity Today, and Lapido Media. He blogs on Egyptian politics, religion, and culture at A Sense of Belonging, and can be found on Twitter at @jnjcasper
North Africa