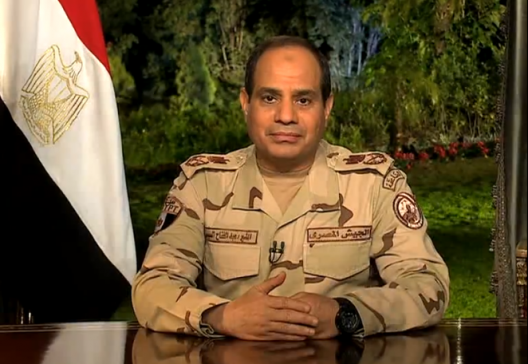 There is a myth now being promoted by intellectual, political and media groups who favor the regime that followed the July 3 2013 overthrow of Mohamed Morsi, and support former Defense Minister Field Marshal Abdel Fattah al-Sisi’s run for president. While this myth deals with Egypt’s current situation, its structure is far from new. In fact, consecutive ruling elites have relied on this myth since the 1950s to justify oppression, human rights violations, restriction of freedoms, autocracy, and lack of democracy and sustainable development.

The “candidate of necessity” myth reduces Egypt and its issues to one person, the hero-savior, being introduced to the public before the presidential elections as “the only candidate” capable of “rescuing the nation from the current danger” and “the last hope” for “saving the nation from the evils and harms of the enemies, inside and out” and achieving its greater goals and objectives.

Here, the pro-Sisi intellectuals, cultural elite, politicians and journalists are using his affiliation with the military, the great respect that Egypt’s men and women have for the regular, historic role played by this institution in safeguarding the cohesion, sovereignty and security of the state. They intentionally conflate this military role with involvement in politics and rule, and in doing so, lay the foundations for the “candidate of necessity” myth. The pro-Sisi messages, now heard widely on public and private media outlets, invoke a litany of slogans and stereotypes to imply the former defense minister is the only one who is able to “save the ship of state, battered by storms of internal and external conspiracies;” “confront and defeat terrorism;” “guarantee efficient state institutions and vital services because his career is rooted right at the heart of the military institution;” “achieve a cohesive state and society following the chaos of the past few years;” “implement a real reform program adopted by state institutions and backed by a popular majority yearning for a strong president;” “transcend the current exceptional situation of danger and crisis,” and many others. It is worth mentioning that private media outlets are identifying with the ruling power either because they are under the control of public media, or because of the organic bond between the economic and financial interests of the private press and influential departments, institutions and services of the state.

The “candidate of necessity” myth stifles the people’s preferences by eliminating in practice the right of Egyptians to cast their vote freely among diverse presidential candidates, and excludes any real chances of competition outside the electoral process. If we take these facts into consideration, in light of Egypt’s current situation of military–security dominance, decay of politics, prevalence of one voice, compounding violations of human rights, freedoms and the constitution, and oppressive, undemocratic laws passed in recent months, the “candidate of necessity” myth becomes a new step in a series of acts diverging from the course of democracy. This myth reintegrates tyranny and autocracy. It is a new step, but one that, left up to the ruling powers, will be followed by others. In fact, other myths will be established and promoted such as the “inspiring leader,” “eternal leader,” “president’s party,” “president’s achievements,” “the need for the president to stay in his position because there’s no alternative,” and others.

After the events of July 2013, some intellectuals, cultural elite and the press have been trying to turn back the hands of time. Voices, that in the 1950s, 60s and following decades promoted the myth of the “president of necessity” and “eternal leader,” are resurfacing today to play the same role through the “candidate of necessity” myth. Remarkably, this has occurred even after the January 2011 revolution that sought to keep pace with modernity, seeking justice, rights, freedom, rule of law and rotation of power, then democracy and development. It’s as if the results of the 1960s, 70s and later decades were not catastrophic for Egypt and did not lead to autocracy, and the lack of justice, rights, freedom and development that ignited the January 2011 revolution. It’s as if autocracy and the accompanying myths did not testify to the experience of countries near and far that failed to overcome their own crises. These countries failed to safeguard the cohesion of the state and communities whose sovereignty, stability, security, civil peace and coexistence are threatened by unjust, violent and oppressive autocratic rulers, far more than internal and external conspiracies, whether real or fabricated.

This prevalence of one voice overwhelming rationality, knowledge and science paves the way for the suppression of opposing visions and ideas. But what is also striking is that some intellectuals, cultural elite, politicians and media outlets, in justifying the myth of the “candidate of necessity,” argue that this is no contradiction with real competition in presidential elections and do not strip them of their credibility by calling them a mere spectacle the contains some democratic and pluralistic elements. Rather, they argue that there is a link between them and democracy, rule of law, rotation in power, guarantees of human rights and freedoms, and pro-reform sentiments. In complete disregard for human history, these arguments suppose that authoritarianism will lead to a democratic outcome, and that it is possible for tyranny to establish these myths, and then to confine them to a set period of time.