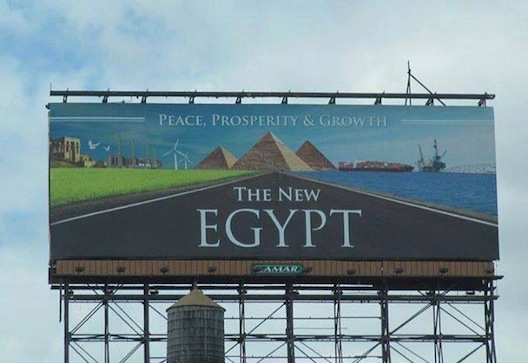 As President Abdel Fattah al-Sisi headed to New York at the end of September to attend the United Nations 69th General Assembly, an advertising campaign was simultaneously launched in the city. Large billboards popped up across New York promoting ‘The New Egypt,’ featuring the tagline, ‘Peace, Prosperity and Growth.’ The source of funding for the campaign remains unknown, but according to local reports, it was funded by an Egyptian businessman who accompanied Sisi during his first US visit. During the same week, an image of another billboard made the rounds on social networks. The billboard, in Cairo, received attention not because of an advertisement, but because Farag Rizk Farag, a 48-year-old Egyptian truck driver had taken his life by hanging himself from its scaffolding.  According to reports, he was facing financial difficulties, struggling to support his family.

His first and last name, Farag, in Arabic mean relief, while his middle name Rizk means livelihood. However, contrary to what the meaning of his name, Rizk found neither relief nor a livelihood in the ‘prosperous and peaceful’ Egypt, as depicted in the New York billboards.

The contradiction of a billboard in New York promoting Egypt’s prosperity, and a billboard in Cairo, capturing the despair of its people, is not the only inconsistency in the country today. The majority of political talk shows today glorify Sisi, defend the regime, and turn a blind eye to corruption and state abuses. Meanwhile, Egyptians continue to face daily hardships: power cuts, inflation, poor public services, and more.

One of the billboards featured an image of Sisi’s flagship project: the Suez Canal megaproject. Local Egyptian media has portrayed the project as a miraculous solution to all of Egypt’s economic problems, one which will secure prosperity, and more importantly jobs, for its citizens. The image slapped on a giant billboard in New York City ignores the repercussions felt back at home by Egyptian residents living in the vicinity of the megaproject. At least 1,500 homes have been destroyed, their owners or residents given no compensation, in order to make way for a bypass to the new canal. This treatment is reminiscent of the displacement of Egypt’s Nubians as a result of another megaproject – Gamal Abdel Nasser’s Aswan Dam. Fifty years have passed and for the first time Egypt’s constitution promises Nubian repatriation within the next ten years, but little if nothing has been done in working towards this goal.

The Mediterranean Sea is the world’s deadliest migrant crossing, and, knowing the risks, Egyptian youth increasingly take the risk of trying to illegally immigrate to Europe. The unemployment rate jumped from 10 percent in 2008 to 16.6 percent this year, likely pushing many to put their life on the line looking for job opportunities and better wages. Consequently, an Italian delegation arrived in Egypt to discuss ways to limit illegal immigration. One of many of these attempts revealed a heartbreaking handwritten note found on a beach in Sicily last month, after a boat carrying illegal immigrants sunk in the Mediterranean Sea. The note read, “I wanted to be with you. Don’t you dare forget me.” The most recent disaster saw 500 migrants, among them Egyptians, drown when their boat sank as they tried to make their way from Egypt to Malta.

Before his UNGA speech, Sisi, representing the UN’s Arab countries, delivered another speech at the UN Climate Summit. In it, he stressed the importance of joining efforts to combat global warning and climate change. This comes less than six months after the Egyptian cabinet approved the use of coal to generate power in order to avoid public unrest over continuous blackouts and only two weeks after the government offered bids to generate 8GW of electricity from coal. Next November, cement factories will start operating on coal to generate energy for production.

According the World Health Organization, the average Cairene inhales more than twenty times the acceptable air pollution on a daily basis. While the government has taken steps attempting to mitigate the negative impact the use of coal will have on Egyptians, the likelihood of a truly regulated coal industry is slim, and Egyptians will face the consequences. Sisi’s statement during the climate change summit was largely inconsistent with what the Egyptian government’s own plans.

At this point of history, Egypt is living a moment of cognitive dissonance clearly demonstrated in the contradiction between reality and false depiction. The reality is full of sorrows and pains and the faster we realize this, the sooner we can defeat it.

Mina Fayek is a Cairo-based blogger and activist. He can be found on Twitter:@minafayek or his blog: http://minafayek.blogspot.com