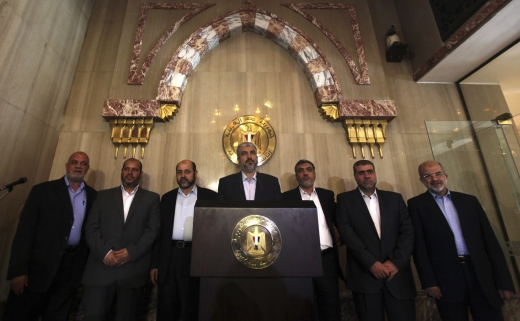 With Egypt spearheading the creation of a unified pan-Arab military force and lending air and naval support to efforts by the Saudi-led coalition in Yemen, it appears that the current government is making strides to restore Egypt’s image as a regional leader. The country’s role in the Middle East Peace Process has, however, been impacted by a concerted campaign against the Islamist Palestinian group, Hamas, over the past year and a half, culminating in a court verdict designating the group as a terror organization. With relations between Hamas and Egypt reaching an all-time low, it would appear that Egypt is now in the process of backtracking, with the government’s State Lawsuits Authority appealing the verdict.

Hamas, the Palestinian branch of the Muslim Brotherhood, is among those who have paid a heavy price following the removal of former President, and Brotherhood leader, Mohamed Morsi. Amid increasingly anti-Muslim Brotherhood sentiment, local private and state media has hammered Hamas. The group has been accused of providing armed support and training to members of the Brotherhood and other Islamists allegedly involved in terrorist attacks, and of using tunnels dug along the border between Egypt and Gaza in the attacks. Hamas has vehemently denied the charges, but its close connections with the main headquarters of the Brotherhood in Cairo cannot be questioned.

The lawsuit against Hamas was first filed by Samir Sabri, a lawyer who has brought multiple issues before the courts, including a case charging that Qatar and Turkey should be listed as countries “backing and financing terrorism.” He was also behind cases calling for the April 6 movement and the Brotherhood to be labeled as terrorist organizations, and also successfully had the Qassam Brigades, Hamas’ armed wing, listed as a terrorist organization in January.

In this instance, Sabri asked the Cairo Court for Urgent Matters to force the government to add Hamas to the list of “terrorist organizations,” alleging that, since the January 25 revolution, it has been involved in illegal activities in Egypt. According to Sabri, this included armed attacks on several prisons to free Hamas and Brotherhood prisoners, and cooperating with terrorist groups to attack the army in Sinai. On February 22, the State Lawsuits Authority announced that it was joining Sabri’s case against Hamas, as well as his two other cases against Qatar and Turkey. This confirmed the impression that the government was fed up with the Palestinian movement, and opted to escalate the confrontation.

The verdict in Sabri’s favor raised eyebrows as it signaled an unprecedented deterioration in relations between the two sides. Hamas described the ruling as “dangerous and shocking,” adding that it amounted to “a coup against Palestinian resistance.” In a statement, Hamas alleged the ruling contradicted the wider support it enjoys among Egyptians as a movement fighting against Israel to restore occupied Palestinian land.

Under former President Hosni Mubarak, Egypt backed Palestine’s Fatah faction led by President Mahmoud Abbas, and refused to deal with Hamas. With Mubarak never personally agreeing to receive Hamas leaders, their main channel of communication with Egypt was instead through the late Intelligence Chief, Omar Suleiman. There has, however, always been a need for an open channel of communication between the two sides for several reasons:  Egypt’s joint border with the Gaza Strip, controlled by Hamas since it ousted forces loyal to Fatah in 2006; its control of Rafah-based Palestinians’ main crossing point to the outside world; and its former active role in the Middle East peace process.

The strained relations witnessed an unprecedented change when Morsi became president in June 2012 after winning the first democratic presidential elections in Egypt in the wake of the 25 January Revolution. Hamas leader, Khaled Mishaal, and other top figures were warmly welcomed several times by Morsi at the presidential palace. Reports also emerged claiming that top Brotherhood leaders, such as Deputy General Guide, Khairat al-Shater, were using bodyguards trained by Hamas.

The government’s sudden change of heart, and its decision a few weeks later to appeal the ruling against Hamas, however, indicated that Cairo had reconsidered its decision to push relations with the Palestinian group toward a dead end. The state lawyers noted in their appeal that a decision to consider Hamas a terrorist organization was “an act of sovereignty,” that should be decided by the government in light of the country’s interests. The lawyers added that the ruling contradicts a decree issued by President Abdel-Fatah al-Sisi in late 2014. The Terrorist Entities law outlines the legal steps required when listing organizations and individuals as “terrorists.”

Several columnists known for their support for Sisi, among them Abdullah al-Sinawi, warned of the consequences of the verdict, saying that Cairo needs to have open channels with all Palestinian factions, considering its regional role in the peace process. Additionally, Sinawi notes that no other Arab country has gone so far as to dub Hamas a “terrorist organization,” as Israel, the United States and the European Union, have done.

Reports in the local press also note that the new Saudi King, Salman bin Abdulaziz, was seeking to calm tensions between Egypt and Hamas as part of an overall effort to build a united Arab front against Iran, Riyadh’s main enemy at this stage. Reports add that a top Hamas delegation was preparing to visit Riyadh, with Saudi-Hamas relations having deteriorated in solidarity with Cairo after Morsi’s removal.

In a surprise move, Sabri announced in front of the Appeals Court on Saturday that he was dropping his case following the government’s appeal. He told reporters he took his decision “in order to allow Egypt to continue playing a role in the Palestinian cause, and not to leave it to Qatar and Turkey alone.” He added, “Personally, I have no doubt that Hamas is a terrorist organization, but I took my decision to give the Egyptian government a chance to continue playing its role in reaching reconciliation between Palestinians.”

However, another lawyer who had joined Sabri in his case against Hamas, Ashraf Farahat, told the Appeals Court on Saturday that he insists on pressing the charges, and demanded that the court back the earlier ruling issued in February considering Hamas a terrorist group. The Cairo Appeals Court for Urgent Matters announced on March 28 it will deliver a verdict on May 10.

Hamas Spokesman, Sami Zohri, had welcomed the Egyptian government’s decision to appeal the ruling, saying it was “recognition that a mistake was made against the Palestinian cause.” He added that the movement was “hoping that this step will help in developing relations between the two sides to serve the interests of the Egyptian and Palestinian peoples.”