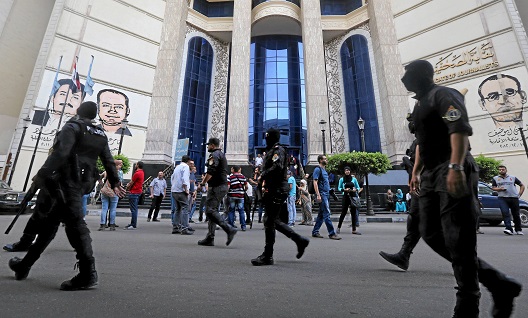 Internet censorship around the world, including in the Middle East, is not a new phenomenon. Freedom of expression facilitated by the internet can pose a threat to authoritarian leaders around the world who seek to maintain strict control over both the content their citizens consume and the content they post. A clear pattern of authoritarian use of the internet to limit citizens’ freedoms can be viewed across the Middle East. Yet most recently, it is in Egypt in particular that this practice appears to be most egregious.

In Turkey, Wikipedia has been blocked for over a year. In announcing the restriction of Wikipedia, Turkish authorities cited the government’s authority to block access to web pages or entire websites as deemed necessary for national security and protecting public order. Social media platforms including Twitter, Facebook, and Instagram, and messaging services like WhatsApp, have also been periodically restricted in Turkey over the last several years, particularly in the wake of the failed 2016 coup, while the overall number of blocked websites has increased. According to the Committee to Protect Journalists, in the second half of 2017 in Turkey, more Twitter accounts were withheld and Facebook content restricted than in any other country.

In Bahrain, the Interior Ministry warned in March that it would be taking new measures to crack down on activists who criticize the government on social media. Saudi Arabia has taken a hard stance against activists using social media who are perceived as threatening to the state. Riyadh is seeking the death penalty for Israa al-Ghomgham, whose charges include filming and publishing protests on social media and encouraging protests and statements hostile to the Saudi regime. And in Iran, where protestors use the internet and social media to organize and spread information about protests, the government has blocked a number of social media sites and messaging services in order to clamp down on public dissent.

Surveillance is also widespread in the Gulf, particularly in the United Arab Emirates. An investigation last year found that the UK’s BAE Systems made large-scale sales of sophisticated surveillance technology to Arab states, including the UAE, underscoring the growing trend of state repression and control of the internet through surveillance. Authorities say surveillance is necessary to keep citizens safe.

In recent weeks, however, the starkest example of internet censorship in the region is Egypt’s passage of a new cybercrime law that infringes on citizens’ rights in the name of national security. Egyptian President Abdel Fattah al-Sisi ratified the law, officially called the Anti-Cyber and Information Technology Crimes Law, on August 18. The law, which ostensibly aims to combat extremism and terrorism, allows authorities to block websites that are considered “a threat to national security” or to the “national economy.” Individuals who visit these websites can face steep fines and penalties. Other measures of the law impose strict penalties for hacking government systems, prohibit the publishing of information on movements of the military or police, and require internet service providers to save and release personal information to security services upon their request.

Under Sisi, Egypt has been steadily restricting the space for online freedom, regularly targeting journalists, bloggers, and media organizations. In May 2017, the government blocked access to twenty-one news websites, accusing them of supporting terrorism and spreading false news. Since then, according to the Association for Freedom of Thought and Expression (AFTE), Cairo has blocked access to almost five hundred websites, most of them belonging to media organizations. Moreover, at least thirty-five journalists, citizen-journalists, and bloggers are believed to be currently detained in Egypt. Recent examples include the arrest in May of blogger and journalist Wael Abbas, a prominent critic of the government. Also that month, Egyptian activist Amal Fathy was arrested for posting a video online criticizing Sisi’s government for failing to protect women from sexual harassment. And just weeks before the cybercrime law was ratified, Egypt’s parliament passed a law that would treat social media accounts and blogs with more than 5,000 followers as media outlets, which would make them vulnerable to prosecution for publishing fake news or “incitement to break the law.” Finally, like other countries in the region, Egypt has sought to acquire surveillance technology that allows authorities to block, monitor, and redirect internet traffic, allowing for a significant measure of state control over the internet.

The significance of this latest legislation, the cybercrime law, is the extent to which it demonstrates the Egyptian government’s effort to institutionalize online repression and restrict internet freedoms through legislation. The Egyptian government has described the law as necessary to tackle instability and protect the Egyptian state while also protecting citizens’ and companies’ data. Dr. Mohamed Hegazy, the head of the legislation committee at the Ministry of Communications and Information Technology, has also emphasized the law’s stated role in protecting the rights of citizens and companies in Egypt. In an interview with Ahram Online, Hegazy said the law was not about censorship, but about data protection. “There is no text in the law speaking about internet censorship or any text that limits the freedom of expression or opinion…We issued this law in order to encourage people to go for digital transformation, and not to put barriers on the internet,” Hegazy said.

However, the stated aims of the law, according to the government, are at odds with the law’s actual impact. The law ultimately boosts the government’s ability to conduct surveillance on its citizens and facilitates the banning of websites. The law’s focus on national security invokes a pattern of repression justified by labeling dissent or criticism as threatening to state stability. According to AFTE, the law’s broad definition of national security covers “all that is related to the independence, stability, and security of the homeland and its unity and territorial integrity,” as well as anything related to Sisi and the state’s defense and security apparatus. The broad definition of national security is in keeping with other measures put in place in recent years by Sisi’s government, including a draconian NGO law, a law that gives senior military personnel immunity from prosecution for abuses, and anti-terror provisions that contribute to the weakening of freedom of expression and civil society. And the so-called protections on user data in the law may actually infringe on citizens’ freedom, as security services will have increased access to user data that can be used to target those who violate the legislation.

There exists a clear trend in Egypt and the wider region of governments seeking to control the internet and online media in order to shut out content deemed threatening to the state. Measures such as Egypt’s cybercrime law offer an avenue for the government to build continued repression into the legal system of the state. The danger posed is the facilitation of human rights abuses at the hands of the state—including violations of freedom of expression—and increasing immunity for state authorities stifling dissent.

The focus of the cybercrime law on Egypt’s national security and economy is no coincidence. Sisi’s government has been battling an extremist insurgency in the Sinai for years with little progress to show. Meanwhile, the economy has been a flashpoint throughout Sisi’s time as president; although Egypt’s economy has grown, high levels of inflation and unemployment, as well as stagnant wages, have contributed to fomenting discontent among the population. Legislation such as the cybercrime law, therefore, are critical to Sisi’s overall effort to deflect or suppress any criticism, particularly surrounding challenging arenas such as security and the economy.

Perhaps the most sinister aspect of Egypt’s crackdown on internet freedom is Cairo’s focus on false news. Around the world, the accusation of “fake news” is being used to target dissenters or criticism, including in the United States. This recent legislation in Egypt should act as a warning to democracies around the world of the importance of internet freedom and the way in which internet technologies and legal provisions can be warped to abuse, rather than protect, basic rights.

Elissa Miller is a nonresident fellow with the Rafik Hariri Center for the Middle East.

Image: Photo: Masked Egyptian security forces walk by a demonstration held by journalists and activists against the detention of journalists, in front of the Press Syndicate in Cairo, Egypt April 26, 2016. REUTERS/Mohamed Abd El Ghany/File Photo