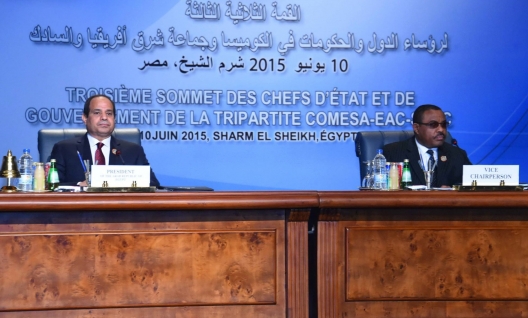 In a move which would establish the continent’s largest free trade area, Egypt has signed an agreement with twenty-five other African countries to form a “Cape to Cairo” Free Trade Zone. Integrating the three economic zones of the Common Market for Eastern and Southern Africa, the Southern African Development Community, and the East African Community, the Tripartite Free Trade Area (TFTA), was signed after a lengthy five year negotiation process. A final step, however, remains before the free trade zone takes effect in 2017. Final ratification of the agreement depends on parliamentary approval in each individual country, and in Egypt, parliamentary elections are not expected before the end of the year. Egypt’s Minister of Industry and Trade Mounir Fakhry Abdel Nour downplayed this, saying, “That effort is simpler compared to the effort that has gone in to preparing the document.”

The Atlantic Council’s Africa Center Director, J. Peter Pham, in an article on AfricaSource, describes the agreement as, “a significant milestone in Egypt’s reengagement with its African neighbors which has taken place under President Abdel Fattah al-Sisi.”

In his article, Pham examines Egypt’s African role, exploring Egypt’s withdrawal from the continent under ousted president Hosni Mubarak, and into the brief tumultous year under former president Mohamed Morsi. There has been a “dramatic shift” since President Abdel Fattah al-Sisi was elected a year ago, Pham argues. He points to the easing of tensions with Ethiopia over the building of the latter’s Grand Ethiopian Renaissance Dam, as well as increased cultural, security, and economic cooperation between Egypt and other African countries.