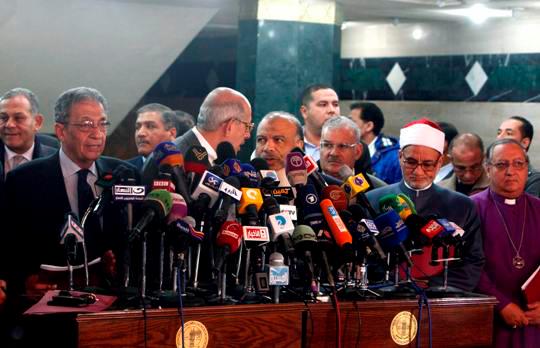 At a press conference following the emergency national dialogue meeting held between members of the opposition and Islamist parties, prominent activist and revolutionary figure, Wael Ghonim said, "The aim of this meeting is not political, but rather to launch an initiative to stop the violence. It’s a moral initiative aimed at stopping the bloodshed. That is why the Egyptian April 6 youth movement called on al-Azhar to hold this meeting and gather together all Egypt’s political forces and parties." Despite the positive first step in political reconciliation and Ghonim’s encouraging words, an unspoken (yet glaring) gap stands out in this meeting: the absence of government or any other representative of the security apparatus. Although representatives of the Muslim Brotherhood and the Freedom and Justice Party (FJP) attended the dialogue, no formal authority from the most significant party to the "bloodshed" — the ministry of interior — to which Ghonim refers could be found. Sadly, the discrepancy renders the resulting signed document committing the parties to nonviolence moot.

In a sudden about-face, after consistently rebuffing government calls for dialogue, Mohamed ElBaradei, chief coordinator of the National Salvation Front (NSF) and the largest bloc of Egypt’s opposition, called for a national dialogue to bring an end to the violence plaguing Egypt’s streets for nearly a week. He called for a meeting with President Mohamed Morsi, members of the government, and leaders of the country’s political parties and Islamist movements. The announcement was soon followed by a meeting between one of the largest Salafi movements, al-Nour party and the NSF, while al-Nour party’s offshoot, al-Watan, commended ElBaradei’s stance.

Despite Morsi’s absence, the national dialogue meeting went ahead on Thursday in the presence of al-Azhar’s Grand Sheikh Ahmed al-Tayeb, along with members of the NSF, leading figures from the three Egyptian churches, as well as leaders of the Strong Egypt, Wasat, Free Egyptians and Reform and Development Parties, among others. The meeting ended with the signing of al-Azhar’s10-point document calling on political actors to renounce violence. The document emphasized the state’s and its security institutions’ obligation to protect its citizens, their constitutional rights and freedoms, as well as protect public and private property. With the document, the signatories also expressed their commitment to serious national dialogue between all parties, and agreed to the formation of a committee under the auspices of al-Azhar. The president’s office issued a statement, albeit on its Facebook page, welcoming the initiative.

Many can agree that the most immediate need entails an end to the ongoing violence in the streets that has left almost 60 Egyptians dead in the past week. The Azhar agreement, however, means precious little when the ministry of interior that is party to the street conflict remains absent. In a statement published by State Information Services on Wednesday, Prime Minister Hisham Qandil expressed his support for Egypt’s police force, and approved equipment requested by policemen to perform their jobs. While the state news outlet did not clarify with what he had promised to equip them, the statement followed news that the ministry of interior is considering arming security forces who guard state institutions with live ammunition. At a time when the worst of the violence thus far saw casualties to civilians by gunshot, a commitment to nonviolence from the police would bear more weight with the average Egyptian protester.

Another question is how much influence do these political parties have over a highly volatile street movement? While some of the revolutionary youth rallied behind parties such as the Free Egyptians Party or the Egyptian Social Democratic Party early in the transition, they were quickly disillusioned with personality politics, and consequently withdrew from the political scene, returning to the street as an expression of their own political demands. In fact, a leaderless revolution has been a source of pride for many young Egyptian activists, and they have little desire to grant the mantle of revolutionary legitimacy to a political actor. At one point in time, ElBaradei was seen as a potential representative for the revolutionary youth. His arrival on the political scene in 2010 galvanized the youth but his behavior throughout the transition — meant to preserve his credibility — left him appearing noncommittal. As a result, his support is as reliable as he is. The presence of April 6 Movement leaders may strengthen the call for calm, particularly after having shown their support for the Ultras’ cause, however the motivations for civil unrest are varied and — contrary to Ghonim’s stance — inherently political.

While violence on the street has dissipated, it has not come to a complete end, as clashes continued in Cairo and Kafr El Sheikh with four additional deaths reported on Wednesday. As political parties on either side of the spectrum attempt to find common ground, trying to move past this deadlock also entails finding a way to appeal to the youth movements that have long disassociated themselves from Egypt’s political parties. To do so, these groups must focus their efforts on security sector reform as a major component of reconciliation. Morsi’s government, like the SCAF before it, has been unable to bring about true accountability for protester deaths dating back to January 2011, the latest acquittal announced on the same day as the talks. Without accountability and a commitment from the ministry of interior to nonviolence in the face of peaceful protests, Egypt’s political forces are faced with a tough sell when appealing to the street.

Tarek Radwan is associate director for research at the Atlantic Council’s Rafik Hariri Center for the Middle East and a blogger for EgyptSource.

Nancy Messieh is associate director at the Atlantic Council’s Rafik Hariri Center for the Middle East and editor of EgyptSource.