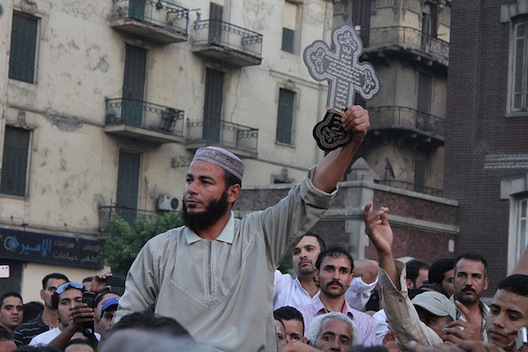 Following the violent and bloody dispersal of the month-long pro-Mohamed Morsi sit-ins in Raba’a al-Adaweya and al-Nahda, a wave of attacks spread across Egypt leaving close to one hundred churches and Christian properties attacked, damaged, or fully destroyed. While there are only a few reported deaths, this is the largest, most coordinated sectarian violence that Egypt has witnessed since the start of the revolution and in Egypt’s modern-day history. The timing and nature of the attacks have left many wondering who is responsible for the violence, and as the only two groups with an organized network, blame has been thrown back and forth between the Muslim Brotherhood and State Security.
Egypt’s Christians have historically been a nonviolent and unarmed minority, thus making them an easy target of sectarianism. Reports of kidnappings to secure ransom money and other incidents involving the kidnapping of young girls to marry them off to men in villages have long plagued Upper Egypt and the entirety of the country, but remain relatively unreported and unresolved by the government. Church buildings have commonly been vandalized and stores belonging to Christians attacked or robbed, with these types of attacks disproportionately increasing in the days prior to August 14.

Even before the attacks began, perpetrators had already marked Christian stores with an “x” to differentiate them from Muslim-owned properties. In some areas of Egypt, attacks on Christian properties and churches took place almost immediately after the sit-in dispersals began. By 9:30 a.m., villages in Minya were experiencing the pervasive destruction of Christian homes, stores, and properties. In some areas, no Christian store was left untouched. One woman, not knowing what was happening in Cairo, was attacked as she opened her store in the morning, grabbed by the hair and thrown into the street as attackers robbed and looted. With incredibly poor coverage of news from Upper Egypt as the epicenter of sectarian attacks, horror stories are slow to reach Cairo and the rest of the world. However, even when the opportunity to report arises, many Christian families refuse to talk, for fear of reprisals. Many stay behind locked doors, with their Muslim neighbors going out to buy groceries for them.

Immediately after news of sectarian attacks broke out, Muslim Brotherhood leaders denied responsibility and claimed that State Security was behind the attacks. Despite this and other efforts by the Brotherhood to portray an image of tolerance and inclusivity to the West, these attacks come on the heels of a constant flow of sectarian rhetoric from the Raba’a stage as well as the Freedom and Justice Party’s social media sites that suggest that the violence should have been expected in response to Pope Tawadros II’s support for Morsi’s ousting: “the Church mobilizes the Copts in June 30 demonstrations to topple the Islamist president.” The statement also ominously reads: “For the Church to declare war against Islam and Muslims is the worst offense. For every action there is a reaction.” The sectarian rhetoric has continued in the wake of the violent dispersal of the pro-Morsi sit-in, with the Brotherhood’s official website reporting that Christians were shooting at a protest that left from a mosque on August 16. At the end of July, prior to the widespread attacks on churches, the website said that the Church was acting irresponsibly by calling for a ‘war on religion.’

While the Brotherhood has a history of divisive rhetoric, it makes little sense to conduct such attacks if the group continues to maintain political aspirations. Large-scale sectarianism would certainly work to the Brotherhood’s disadvantage by detracting from Western support, which they have enthusiastically worked to garner through charm-offensive trips to Washington DC, interviews with international media in English, and the provision of eye-witness accounts to events like the first and second Raba’a massacres.

It was only natural for the Muslim Brotherhood to speedily direct blame towards State Security, as the only other institution large and organized enough to coordinate on a mass-scale. In light of the current political battle, the government and armed forces could certainly benefit from arranging for the attacks and then allowing the general hatred of the Brotherhood to implicate them, thus giving an impetus for Egypt’s newly declared “war against terrorism” and its concerted effort to label the Brotherhood a terrorist group. With mounting international criticism against the military takeover and the massacring of hundreds in what has been described as the most violent crackdown by the armed forces since the start of the revolution, State Security certainly stands to benefit. Those who believe that the state is complicit in the church attacks often cite the bombing of Saint Mark in Alexandria as an example, since it is commonly believed that then-Interior Minister Habib al-Adly was behind the attack, however, no investigation or arrests in connection with the bombing have been carried out to date.

Despite what State Security could gain from such violence, it is difficult to imagine a state security system that would marginalize a significant portion of its population and place them in a state of constant terror only to further alienate the already deeply resented Brotherhood. Egypt has long been plagued by sectarian language that has seeped deep into society and manifested itself in a history of sectarian violence, and to further implicate the Brotherhood during these recent attacks, some eyewitnesses have confirmed the involvement of locals, often considered Muslim Brotherhood sympathizers. In addition to graffiti, cries of “Allahu Akbar” have preceded the looting, burning, and destruction of churches, homes, and stores indicating sectarian motive. While most members of society do live at peace with neighbors from other religions, the issue of sectarianism has not been dealt with, leaving many un-reconciled conflicts simmering under the surface.

Ultimately, both the Muslim Brotherhood and State Security carry the weight of responsibility, one of incitement and the other of avoidance. The Muslim Brotherhood’s rhetoric and actions have long served as a source for continued violence. Even without a direct call from the Brotherhood leadership to attack Christians, segments of society have been inundated with hate speech and are ready to commit such acts. State Security’s refusal to contend with sectarianism and take real steps to counter it, despite their knowledge of clear threats and marginalization, has allowed both rogue individuals and organized groups to threaten the existence of Egyptian Christians and their buildings (some of which are historical relics which date back to the 4th century). Informal ‘reconciliation meetings,’ which bring no real justice or accountability, filled the void left by the government’s inability, or unwillingness, to address sectarian issues, whether under Mubarak, the Supreme Council of the Armed Forces or Morsi. The current interim government shows no signs of being different.

In the fight to gain credibility and to influence local and international media, the everyday Christian has become a pawn in a political chess game, paying a serious price in the power struggles of others. Ancient relics, the livelihood of individuals, the dignity of the Egyptian people, and the hope of democracy continue to be sacrificed as the Muslim Brotherhood proliferates hate speech and Egypt’s State Security fails to secure its population.