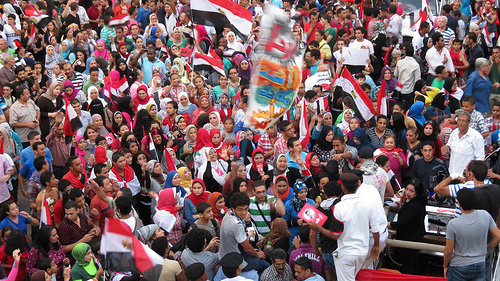 With the removal of former president, Mohamed Morsi, from power, Egypt’s revolutionary youth have bristled against the labeling of his ouster as a ‘coup.’ Over months, tens of thousands of volunteers labored to collect 22 million signatures demanding that Morsi call for early presidential elections. With their demands ignored, Tamarod escalating its call to protest, as millions of demonstrators gathered in every major city in Egypt on June 30, calling upon the army to remove Morsi. But coups with massive public support are nothing new, so why should Egypt’s case be any different?

As is the case with many global protest movements, Tamarod was shaped by significantly different forces, bringing together individuals who did not find themselves represented through a traditional representative democracy. A representative democracy which fails to represent its constituencies is by definition dysfunctional, even if the government or president has come to power through free and fair elections, which technically meet international standards. This sense of disenfranchisement can be seen in protests in Tunisia, Turkey, Brazil and even in the Occupy movement.

In crowd-democracy, the most powerful political player does not have headquarters or a leader. It is still able to debate ideas, processes trends, develop creative strategies, tactics and demands and can mobilize millions of people who voluntarily contribute to the cause. In Egypt’s crowd-democracy, disenfranchised individuals were empowered by technology, using social networks like Twitter, Facebook and YouTube, developing a “Connected Mind” which unlike before, was able to leverage their otherwise fragmented influence.

In the case of Egypt, those who were part of this empowering street movement which toppled a thirty-year dictatorship, found themselves, come election time, faced with a ballot that included candidates tied to the old regime. Ahmed Shafiq represented the former regime, while the Brotherhood candidate, Morsi, represented the same political contenders of pre-revolution Egypt. If a political system is defined by the choices it presents, the presidential election runoffs were a reflection of old regime politics. The new forces failed to generate viable options, as the “Connected Mind” of the revolution found itself outside the equation.

The most powerful political player in the game was not invited to the table, and the movement which enabled all candidates to run in the elections in the first place, was missing as traditional instruments failed to catch up with newly emerging social and political movements.

In crowd-democracy, the most powerful political player does not have headquarters or a leader. Yet, it is capable of debating thousands of ideas, exchanging information, processing trends and options, developing creative strategies, tactics and demands and mobilizing millions of people who voluntarily subscribe to the cause. This “connected mind” can be seen as the leader, thinker and strategist of the movement. It is a dynamic and voluntary network of people thinking together of ways to support a common cause. In crowd-democracy, these disenfranchised individuals get empowered by technology, particularly social networks such as Twitter, Facebook and Youtube and develop this “Connected-Mind” which unlike before, now leverages their otherwise fragmented influence.

Absent from the formal political process, Egyptian revolutionary forces have been influential in policy-making and legislation using the crowd-democracy model, at least, since January 25, 2011. Mubarak was removed by a leaderless revolution which was largely steered by this “connected mind”. . The Supreme Council of the Armed Forces (SCAF) had to change the prime minister twice, as a result of crowd-democracy mechanics. Similarly, it changed ministers and governors, reorganized the State Security apparatus, changed media structures, amended election laws, proposed supra-constitutional principles and modified transition dates in response to swelling Friday protests or massive online campaigns. SCAF reform initiatives were often issued on a Wednesday, to give protesters what they wanted so as not to assemble the next Friday. Morsi himself was removed as the result of a similar movement using the same mechanics.

But if you manage to get 22 million signatures, why can’t you win elections? Unfortunately, up until now, these have been two different and poorly integrated worlds. The National Salvation Front (NSF), composed of secular political parties, could potentially attract or represent some of these “Connected Minds,” but that does not guarantee that they will actually support the NSF with the same zeal; or that once in government, they will continue to back it. Lacking in the relationship between the Connected Mind and the political players are ownership, responsiveness and interactivity. Handing over a blank check to the government for four years is What is missing is ownership. Fast response and interactivity. What is no longer acceptable is giving a blank check to a government for four years. Opinion polls could help in bridging the gap between government officials and elected representatives; and the masses they claim to represent , but the difference between opinion polls and crowd-democracy interactions is that polls come with traditional questions based on realistic options to choose from, while the “Connected Mind” often comes up with new paradigms and invents extraordinary options; like calling for early elections in order to resolve the political deadlock.

In a traditional democracy, winning elections depends on funding, organization, logistics, lobbying, alliances, the efficiency of a party’s election machinery and its messages and media outreach. In the case of Egypt, the two presidential candidates who topped most polls, Hamdeen Sabbahy and Abdel Moneim Aboul Fotouh, were both seen, to some extent, as representative of the revolutionaries. They, however, did not make it to the runoffs because they lacked these ingredients and also because they failed to join forces.

In the case of parliamentary elections, it was even worse as the elections required deeper pockets and a far wider reach, one that most youth movements or new parties representing the revolution did not have. The result was that wealthy, well-organized parties were able to secure gains greater than their actual popular support. Once elected, protesters felt alienated from the legislature, as some members of parliament suggested the removal of English from the educational curriculum, Internet censorship, and more. As a result, protesters applied negative pressure, choosing not to protest a Supreme Court verdict dissolving parliament.

Of course, there is no single “Connected Mind.” Every movement will have its own networked individuals and ideologies. With Morsi’s removal, the question that remains is how to engage and integrate the “Connected Mind” of his own supporters and their protest movement in shaping the future.

Critics will say this is no way to run a country, and that daily life cannot be disrupted by protests in order to pass laws or change governments. They will say public policy cannot be developed by counting how many people are in Tahrir, and that sound policies require long term stability before paying dividends. However, it’s important to note that crowd-democracy does not mean chaos must ensue. The reality is that people assembled in the square only because they were grossly misrepresented and no one gave them an alternative. Crowd democracy simply gets us a step closer to direct democracy with the help of technology. The new Egyptian government must find ways to integrate this “Connected Mind” in its policy debate and formulation or face the same fate as its predecessors. Technology allows it. New political structures and legislations should emerge to make it happen; otherwise we can begin a countdown for this, and every future government in Egypt.

Wael Nawara is an Egyptian writer and activist. He is also a co-founder of Al Dostour Party and was a visiting fellow at Harvard’s Institute of Politics.