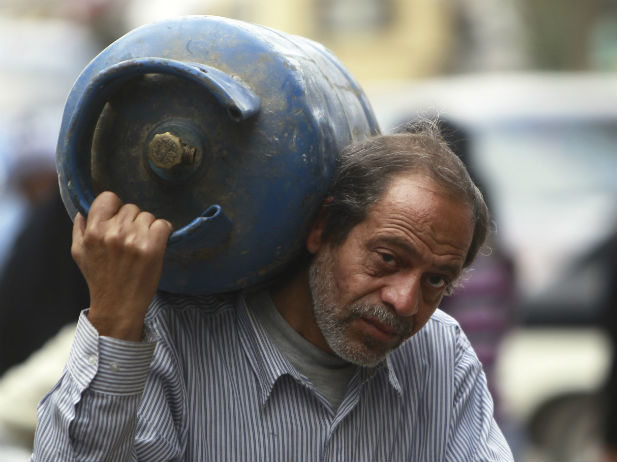 In the last couple of months, Egyptians have suffered from a malfunctioning fuel subsidy system that is badly in need of reform. Cars have been lined up to fill their tanks at gas stations. At warehouses, queues were too long to buy gas cylinders. The low subsidized price of the petroleum products and gas cylinders has created a thriving black market, where large quantities are being smuggled and sold for higher-than-market prices. Furthermore the system fails to reach the poor because 80 percent of the fuel subsidies benefit the wealthiest 20 percent of Egyptians, according to the Ministry of Petroleum. This raises concerns about the effectiveness of the system and its failure to reach the right beneficiaries.

Petroleum subsidies put a huge burden on a budget deficit that is already out of control, as Egypt’s economy struggles under the weight of increasing international prices and a depreciating currency. The government is isolating the market from the increase in international prices and at the same time faced by an increasing domestic demand. This has resulted in soaring public spending on subsidies increasing by 17 percent in 2011/12 compared to 2010/11. This has been exacerbated by the depreciation of the Egyptian pound in 2011 due to political instability, increasing the value of the imports’ bill. As a result, Egypt’s foreign currency reserves have been eroded by over 50 percent in the last year.
This high fiscal cost of the subsidy system crowds out high priority public investment in health, education and infrastructure. Total expenditure on health and education represents 5 and 11 percent of total public spending in 2011/12 respectively, compared to 20 percent spent on the petroleum subsidies in the same year. It is crucial to prioritize public spending on investments that have high social benefits. In order to do so, the government needs to free up some of its resources. The need for subsidy reform is becoming acute at an already urgent time where the government is trying to minimize the budget deficit and is in the process of negotiating a loan from the IMF due to growing budgetary pressures.
In the mean time, it is important to understand the positions of the presidential candidates regarding subsidies. Abdel Moneim Aboul Fotouh, one of presidential candidates, has explicitly stated that he plans to decrease the fuel subsidies by half (particularly those directed at energy intensive industries) and do a better job targeting households, especially in poor areas like Upper Egypt.  Hamdeen Sabahi, a socialist presidential candidate, emphasizes in his campaign platform the necessity of prioritizing government spending. Sabahi did not highlight the fuel subsidies issue in his program, but he cited plans to shift towards solar energy, with a goal of deriving 20 percent of Egypt’s total energy needs from solar power within eight years. The rest of the candidates have not announced yet their position on the issue.
The great fear surrounding subsidy reform is that the removal of subsidies might lead to discontent among the masses. This scenario was witnessed earlier this year in Nigeria. The Nigerian government decided to double the prices of petrol to ease the burden on the budget, which kicked off a seven-day workers’ strike. In response, the government announced that the price increase would be less than initially stated. The protests were mainly fueled by the fact that there were not any clear plans on how the money saved will be directed towards financing other projects. This raises concerns in Egypt that the removal of the fuel subsidy might result in similar response and could cause unrest among the middle class.
However, the fiscal expense, poor targeting and the inefficiency of the program makes fuel subsidy reform an urgent necessity. In order to contain the expected social unrest, the subsidy removal policy should be transparent and coupled with other reform measures.
Four ministries are currently studying the implementation of a new coupon system for the supply of the subsidized gas cylinders. Eligibility for this subsidy will initially be limited to families with ration cards and not connected to a natural gas network. A family of fewer than 3 members is entitled to 1.5 cylinders every month for a subsidized price that has not been agreed upon yet. If the household consumption exceeds the allowed quantity, the family can buy more on the market for a higher price (around 25 Egyptian pounds). The price for commercial consumption (i.e. for restaurants and shops) is also 25 Egyptian pounds. This system, if proven to be efficient in its targeting and discouraging the phenomenon of smuggling, should be extended to other petroleum products beyond natural gas, especially those that are primarily benefiting the wealthiest quintile of the population.
The government must develop a clear plan for utilizing the fiscal savings accrued from this subsidy reduction and how these funds will be spent in other sectors. Budgetary savings could be directed towards providing decent public transportation and efficient social safety net programs. As a long term solution, substituting natural gas for petroleum products will be required through continuation of connecting households to the natural gas network. This will result in savings on the expenditures side since the cost of natural gas is almost quarter that of other petroleum products at international prices.
The gradual phase out of the fuel subsidy system is inevitable and necessary. This reform project should go hand in hand with finding cheaper substitutes for the expensive petroleum products, rationalizing consumption and establishing a well targeted program that still covers those most in need.
Maye Ehab is an economist at the Egyptian Center for Economic Studies (ECES). She previously served as a visiting fellow for the United Nations Conference on Trade and Development.
Photo Credit: al-Ahram