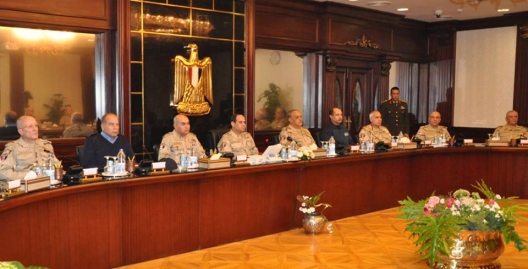 With the Supreme Council of the Armed Forces giving the nod of approval for a possible presidential bid by Defense Minister Abdel Fattah al-Sisi, his candidacy is looking more likely by the day. Despite overwhelming popular support of Sisi, in this highly polarized political atmosphere, demobilizing the anti-military component of the Egyptian electorate sets the stage for the gradual normalization of the military’s direct role in national politics.

The military establishment’s deep-rooted organizational channels and inherent structural cohesion are unrivaled among the country’s array of political groups and parties. Equally unmatched are its stakes in remaining a dominant force in Egypt’s power configuration. As theories of authoritarianism suggest, protecting the financial interests of the armed forces is one of the main endogenous factors behind increased military intervention in politics. A closely guarded national secret, the size of the army’s economic assets can be gleaned from the vastness of its commercial holdings.

Its vested interest in maintaining Mubarak-era policies has led the military to circumvent any meaningful reform that would threaten its economic empire.  Granting itself supra-constitutional powers in the immediate aftermath of the 2011 revolution allowed the military to avoid subordination to a democratically elected civilian government, a critical condition for the success of democratic transitions. The then-ruling Supreme Council of the Armed Forces (SCAF) issued a constitutional declaration, allowing the military to unilaterally dissolve the parliament in 2012 and disrupt the political process at various critical junctures. The 2012 constitution included provisions from the Code of Military Justice that would allow trying civilians in military courts, and gave military prosecutors exclusive jurisdiction over crimes committed by military personnel.  These provisions were carried over into the 2013 constitution, which grants the military even greater autonomy, protection and power, further reaffirming its role as ultimate powerbroker.

Significant military involvement in the economy began under President Gamal Abdel-Nasser in the 1950’s. High-ranking officers were entrusted with overseeing Nasser’s nationalization project and “import substitution industrialization” model—a model that favors domestic products over foreign alternatives. Economic liberalization under Anwar Sadat and large-scale privatization under Hosni Mubarak succeeded in curbing the military’s role in state affairs, gradually reducing the proportion of active officers within the executive.  With a diminished role in public sector management and decreased defensive requirements after the signing of the Camp David Accord with Israel, the military began its expansion into the private sector. Patronage and power ensured that the military establishment was given free reign to expand its revenue-generating activities. A 2008 State Department Cable published by Wikileaks revealed that, according to a Cairo University professor, large amounts of land owned by the military in the Nile Delta and on the Red Sea coast are offered as a “fringe benefit” in exchange for the military ensuring regime stability and security. Cooperation with the state facilitated obtaining permits, credit and raw material.

There are no existing figures on the percentage of the economy owned by the military, but some estimates place it as high as  40 percent. The military’s role in Egypt’s civilian economy is managed largely through two main private holding companies. The National Service Products Organization (NSPO) is a military run entity that operates under the defense ministry and manages factories that exclusively produce civilian goods. The Arab Organization for Industrialization (AOI), controlled by the ministry of state for military production, supervises nine factories producing civilian and military goods. It employs 16,000 Egyptians and has joint ventures with companies, including Chrysler and General Electric. The armed forces diverse field of income generating-projects ranges from petrol stations and cleaning service companies, to environmental projects such as waste water treatment and renewable energy. Other enterprises include food production, hotels and resorts, housing developments, and industrial and agricultural projects.  Furthermore, the military engages in operations with Gulf Conglomerates, such as the Kuwaiti group M.A. Kharafi and Sons and western multinationals, such as the Italian oil and gas company Eni S.p.A. Joint ventures have been established in a wide range of sectors, from oil and renewable energy to computer manufacturing. All profits go directly into the military’s accounts.

Military enterprises have undercut local entrepreneurship, enhanced a deep-rooted patronage system, and led to unequal development. Lloyd C. Gardner writes in The Road to Tahrir Square, not only does the military have the right to veto business contracts if it feels that they interfere with its business interests, it also enjoys a breadth of economic advantages over civilian owned businesses, including subsidized labor, tax exemptions and access to state resources at a reduced cost. Over the past three years activists and politicians have called for an official query into military procurements, investments and revenues (reporting on these activities has been considered illegal since 1956). With the generals featuring more and more prominently in public life, and a heavy handed approach towards interference in matters of “national security”—military economic activities fall into this category—there is little likelihood these calls will be acknowledged. Not surprisingly, the military’s rent-seeking relationship with the state is as lucrative as ever. Recently, a presidential decree was issued announcing an amendment of the Tenders and Bids Law that would permit direct agreement contracts between the military and the state “…under pressing circumstances.”

Depending on whom you ask, Egypt’s transition was either derailed or restored with the removal of Mohamed Morsi from power at the hands of army generals. What is certain is that that legal and judicial accountability, absent under pseudo-democratic military guardianship will not likely transpire under direct military rule. Whether or not the next president is a former general, reform of civil-military relations was never contingent on the return of the armed forces to their barracks. Rather, it begins with addressing an institutionalized hierarchal structure of patronage and privilege, and the subsequent lack of equal opportunity socially and economically as well as politically.

Safa Joudeh is a Cairo-based broadcast and print journalist. On Twitter: @SafaJoudeh